Hastening west with the information that will clear his brother’s wife of murder, the last thing Deputy U.S. Marshal Kendrick Parker expects when he arrives in St. Louis is to come face to face with the notorious Black Bette Barclay. Knowing the San Francisco Marshal’s office has a warrant for her arrest, Kendrick arranges to bring the dastardly woman as far as his brother’s home in Adler Creek, Wyoming where he will turn Bette over to fellow lawmen. To avoid bringing undue concern to his fellow wagon train travelers, Kendrick concocts the story that Bette is his wife, Mandy. 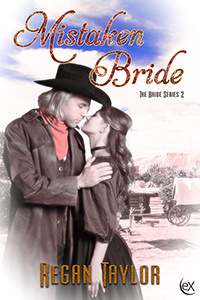 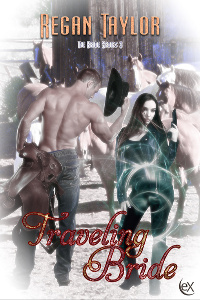 MAY HAVE KILLED OR SOLD NIECE JENNIFER MATTHEWS—STOP

IF STILL IN YOUR TOWN, ARREST, HOLD FOR FEDERAL OFFICER—STOP

Deputy United States Marshal Kendrick Parker read the telegram one more time before giving it to the clerk to send. He and his younger brother, Brett, didn’t contact each other often, but when they did it was for something important.

Brett hadn’t told him anything when he married his wife, Jenna.

However, he didn’t waste any time contacting Kendrick when his bride was in trouble. Not that Kendrick knew exactly what the trouble was. In fact, all Brett had told him in a short telegram was Wife Jenna in trouble, possible murder charge. Check on background of Julian Carlman and possible link to death of William and Dorothy Matthews of New York.

What was interesting was Carlman had come up in a number of discussions in the D.C Marshal’s office over the past couple of years and not in a very favorable way.

With time on his hands between cases in the Washington, D.C. office, Kendrick was on the first train to New York and, within hours of his arrival, began looking into the deaths of the Matthews. Just the surface findings were enough to make the hair on the back of his neck stand up. Simply the possibility that Carlman had killed his sister, Dorothy, was chilling. The other things the man was into were beyond the pale. For years the Marshal’s service had been after Carlman. Now it looked like they finally, with Brett’s intervention, had him in custody and Kendrick would be the man to bring him in.

“I’m ready,” he told the clerk. Despite the words spoken in a soft tone, the timber of his voice was enough to make anyone standing nearby take notice of the tall, blond haired man dressed in the height of fashion. The crisp white cotton shirt was a stark contrast to the jet-black wool suit and the silver buttons that held his suspenders. The only other splash of color was the silver pocket watch chain settled across his waist. His vest was a patterned black satin with thin silver pinstripes all which served to give him the appearance of a prosperous lawyer rather than the lethal Deputy United States Marshal he was.

The clerk glanced at the telegram. One of his gray eyebrows, thick from age, lifted at the contents of the message, but he said nothing.

Sitting at his table, the clerk tapped out the message with precise movements, not at all concerned about the man with the cold blue eyes watching each tap of the key. The clerk sat a moment after completing the message before asking, “You expecting an answer?”

“I would hope something.” Kendrick stood a few minutes, waiting to see if an answer would be forthcoming and was rewarded in a short time with the machine’s steady tap, indicating an incoming message. If he was impatient at the clerk’s deliberate, painstaking writing, he didn’t let it show. If there was one thing his fellow Marshals would say about Kendrick Parker, it was that the man had ice in his veins. He was the last to show temper, methodical in a boxing match to the point his opponents seldom touched him. None were faster on the draw with their guns, which seemed almost incongruent to the Washington raised and bred man. Dirt wouldn’t dare mar his signature pristine white shirts.

The clerk finished writing the short note that said only Received, thanks. Brett, stood and handed it to Kendrick. He gave it a quick glance and nodded to the clerk as he put his coins on the counter. “Thanks.”

He turned and strode to the door. With most of the investigation done in New York, he only needed to tie up a few loose ends before leaving for Washington where he’d have his boss assign another deputy to finish the work there so he could bring the information he’d found out to Adler Creek, Wyoming where Brett waited with his bride. Exiting the Western Union office, he lifted his black bowler and placed it on his head. A few of the proper ladies strolling along the lower Manhattan street gave him the once over, only to be disappointed when he moved on without even a glance. He liked women well enough, but the simpering misses of polite society just weren’t on his agenda today.

A short while later, having picked up his bags from his hotel, he was on his way back to Washington. Sitting back in the seat of the southbound railcar, he drew a long pull off his cheroot. It was a rare ritual, one reserved for the conclusion of a case, and, despite the fact there were a few loose ends to tie up in Washington before he left for Wyoming, the telegram to Brett was a major milestone. Whatever was going on with his little brother’s wife was something he intended to learn in person.