Best-selling author Claire Moss is called home to her father’s side as his health takes a turn for the worst. Upon arrival, she finds the family patriarch and billionaire on his deathbed.

Deceit and deception from her own family leave her reeling when she discovers her stepmother engaged in a sordid extramarital affair with the family trust attorney. She soon realizes that the pair have absconded with the family trust fund—are they also behind her father’s mysterious failing health?

Claire’s former boyfriend, Detective Ian Harris, is assigned to the case. He uncovers the shocking truth about her stepmother’s dark past that seemed to come straight out of one of Claire’s books.

In spite of the sparks that immediately re-ignite between Claire and Ian, can she trust him? And most importantly, can they stop her stepmother in time? 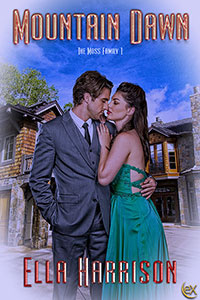 More From The Moss Family

Turbulence shook Claire awake. The kind of turbulence that rattled your teeth together and made you want to text a loved one. Just in case. She peered cautiously around to make sure the plane wasn’t in a full-on nose-dive. The elderly man next to her had passed out on her shoulder, and he was drooling and snoring loudly, oblivious to the chaos unfolding in the interior of the plane.

“Sir, sir.” She shook his shoulder to no avail. His snores were now louder than before. She carefully pushed his head onto his own shoulder on the opposite side. A bit of his drool drenched a strand of her hair. She rooted a tissue out of her purse to wipe her hair and attempted not to gag. Wish I could sleep like that! She stretched her cramped legs and reached up towards the ceiling to get the kinks out of her shoulders and back. Another shudder shook the small regional jet with much more gusto than the last. A woman began to shriek towards the rear of the plane, and luggage flew out of the overhead bin. She looked over her shoulder, where a frumpy older woman was clutching the armrest of her seat, terrified and ready to burst into tears. Ahhh. I bet that’s the shrieker.

“Ladies and gentlemen, this is your captain speaking. Unfortunately, we are experiencing moderate turbulence. There’s a snow squall kicking up in the higher elevations of the mountains, but not to worry, we will be landing in a few minutes. Please remain in your seats with seatbelts fastened. The control tower has cleared us to land as planned, but there is a significant amount of wind creating a crosswind across the runway. I repeat, remain seated, with seat belts fastened. We will begin our descent into Denver shortly.”

The middle-aged woman behind her was truly coming unglued. Her shrill voice sounded more panicked than when the luggage had tumbled out. Claire craned her neck around to get a visual on what was happening.

“He calls that moderate turbulence! The airline will be hearing from me, that’s for sure.” The woman harrumphed as loudly and as dramatically as possible. “I mean, look at that luggage. There’s someone’s panties lying in the aisle. Is someone going to get that cleaned up?” She swiveled her chubby neck around to give the stewardess the evil eye. Rolls of fat and chin-waggle jiggled with annoyance. She shook her frazzled gray head, her condescension written all over her face. She crossed her thick arms angrily across her equally ample bosoms.

A gargantuan diamond graced the frumpy woman’s ring finger, and equally sizeable diamond earrings framed each side of her face. Her earlobes strained under the weight of several karats elongating them.

Uh oh, Mrs. Grumpy Frump has got some money. Am I really making jokes before this plane goes down and we all die right now?

An elf-sized stewardess cleared her throat at the front of the plane. She spoke with more sternness than Claire expected from such a dainty package.

“Mrs. Christman. We’ve been over this. When there is turbulence, everyone must remain seated and strapped in their seat belt. Including me. If I unbuckle my seat belt, we must stop our descent and begin circling the airport. With this storm bearing down, that means we would lose our clearance to land because we don’t have much time. That means we would have to turn around.”

Another dramatic sigh echoed around the plane. The plane was blown sideways before Mrs. Christman could embark on another tirade.  The lights flickered, and more luggage flew through the cabin. The plane then gave a full shudder from tail-to-nose. Fresh screams erupted. As an additional shudder ripped through the plane, Claire felt her breath catch and panic rise in her chest.

Her heart thudded maddingly as she gripped the armrest of both sides of her seat and squeezed her eyes shut. Just as she thought she couldn’t take another minute on the plane, the reassuring thud of the landing gear broke her out of her spiral of panic.

That was when it happened—a huge gust of wind tossed the plane sideways. It shuddered uncontrollably as the pilot fought to right it and keep it on the tarmac. A final gust of wind lofted the plane airborne yet again just before she heard a crunch of fresh snow as it landed a second time in the grass next to the runway. The entire plane waffled back and forth, left to right, before stabilizing. The ride was bouncy, but they were no longer airborne, and the plane had straightened its course out. She exhaled as relief flooded through her entire body. The runway went by quickly outside her window, immediately to the plane's right. They were parallel to the runway and still decelerating. Emergency lights flickered through the snow squall up ahead. They’re expecting us. Thank god. The overhead speaker system crackled to life.

Cheers were heard around the cabin. She snuck a glance over her shoulder, Mrs. Christman sat weeping unabashedly. Her mascara clung in every wrinkle in clumps of black goo and traveled in gray rivers down her chubby cheeks. The elderly man to her right had still not woken up. He’d slept through a near plane crash. Jesus, I hope he’s not dead. She shook his shoulder softly.