Nine for a Kiss

Nothing has gone right in Sadie Lyons’s life since the accident, but she’s trying her best to get back to normal. She’s just not sure if the trip to the old apple orchard was the best decision, and the creepy corn maze run by the even creepier owner confirms her fears. Inside, the maze is even worse, and she’s soon lost in a never-ending labyrinth that twists and turns but goes nowhere.

When a raven joins her as a guide, she feels better, but like the maze, the raven is not what he seems, and the news he brings her changes everything.

Love and loss intertwine in this tale of the endings and beginnings we all face. 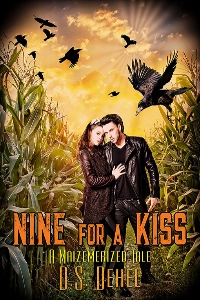 Nine for a Kiss

More From A Maizemerized Tale 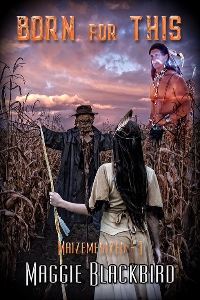 Born for This
Maggie Blackbird
In Shelf
$4.99

Gray clouds sulked their way across the sky. Too light for rain, too heavy to promise sunshine later, mirroring Sadie’s mood and making her wonder yet again if this was a mistake. The trip to the orchard, hanging out with Rachel and her daughter Allie, the interminable drive on a dull day… All of it. It was too soon. She should have stayed in her warm, safe space.

“You good, honey?” Rachel beamed at the back seat, eyes wandering a bit before focusing on her daughter caught in the web of a car seat.

Allie looked up from the game she was playing on a tablet but said nothing. The child blinked twice, then returned to planting sunflowers in her fairy garden. That seemed to be the only point of the game, planting flowers, watering flowers, protecting flowers that eventually grew into different types of fairies.

The smile faded from Rachel’s face. “We’ll be there in a few minutes. It’s just around the corner.”

Rachel had claimed they would be there shortly for the past hour or so. By now, the child clearly didn’t believe her mother. Allie flicked a sideways glance at Sadie, who just gave a half-shrug.

“Wanna listen to the Giggle Group?” Without waiting for an answer, Rachel turned and fiddled with her phone. Within seconds, a chirpy version of I’m a Little Teapot blared from the front speakers.

“That’s for babies,” Allie muttered and went back to killing the zombie unicorns trying to eat her row of petunias.

Sadie had thought things would change again once Allie was born. That Rachel would over-mother her daughter and be less concerned with her handsome—if too jock-like for Sadie’s taste—husband. Yet that was not the case. In Sadie’s estimation, Allie was little more than a fashion accessory for Rachel. A purse or scarf that charmed for a season or two, then discarded.

Pity did not describe what Sadie felt for Allie. It was more akin to empathy. She knew viscerally how the child felt.

Sadie couldn’t say exactly what she’d expected, but not this. Ratty, faded candy-corn-striped bunting dangled listlessly from the facades of derelict carnival games like ring toss and knock down the can. Lights struggled to glow through layers of grime, and a few had expired, leaving snaggle toothed gaps in the lethargically flashing marquees. Even the men—are they men or automatons?—that manned the games looked bored.

Strewn among the games sat a Hall of Mirrors in a building so tiny that it could only contain a few warped glasses. And an antiquated Fun House whose dingy exterior belied the cheery, swirly-eyed animals that waved at passersby. A splintered and faded photo stand-in leaned precariously near a pyramid of equally dodgy-looking bales of hay, broken from their binding and showing the first tinges of mold along the base.

Stand-in? Is that what they call the things people stick their faces in? She couldn’t remember. Once upon a time, she’d have known. But words were so hard for her since…well, since the accident. That’s how people spoke of it, in italics, whispered so she wouldn’t hear. Gazes slid across her as if she wasn’t even there. Sympathetic, watery smiles. This had become her world since that night.

“Okay, pumpkin.” Rachel exited the ancient mini-van and whipped open the rear sliding door. “Let’s get you out of here.”

Allie shut off her tablet and unbuckled her car seat before her mother even came near. The only thing that kept Sadie from thinking of the child as a complete brat was the winsome smile she flashed her before hopping out of the van.

Sadie waited for Rachel to grab the frilly pink backpack loaded with fish-shaped cheese crackers and juice boxes before climbing out herself. Then she stood and surveyed the ersatz fun fair. “Ugh.” She kept her voice low so as not to offend. Not that it mattered, because the trio of Allie, Brian, and Rachel had gone on ahead.

The autumn wind whipped around and through her, raising her long hair in a wild caress. Come with me.

“Where?” she asked the breeze, “Where exactly where would you take me?”

But the wind did not answer. It skipped along on its merry way, rousing some drowsy ravens in the process. They, in turn, cawed and beat their wings at the clouds.

One for sorrow. She counted. Two. Three. Four. Five. Six. Seven. Eight. Nine. Hmm. Nine for a kiss. So strange that her brain could not remember basic things yet could recall a nursery rhyme from her childhood.

The ravens circled and headed for the gnarled and bent apple trees in the distance that marked the border of the festivities. All except for one. That one alighted on a nearby tree, its branches stripped bare by the wind.

“A kiss? Who the hell would kiss me here?”

The raven laughed its hoarse laugh, but it felt more with her than at her.

With another brief caw, the bird took flight. Skimming over the pumpkin patch pocked with bloated orange spheres, then above the dried-out husks of deflated sunflowers hanging their heads in sorrow before joining its peers in the orchard. Sadie followed its general path, taking the track worn by hundreds of feet and wishing she could fly, though she had no idea where she’d go if she could.