***The OFF-ON duet must be read in order. Please read OFF before ON

Maysea (Sea) Heston is kidnapped. She finds herself in a foreign country with her captor, Del, an insanely handsome, obsessively attentive man who is mistaking Sea for the love of his life, a woman he calls Baby. When Del uses Baby’s real name, Bayley Beale Tyler, Sea is stunned and confused. She recognizes the name as one she has heard before. But where? Sea’s need to find out the truth about her captivity is complicated by her growing love for Del, a man who savors her, lusts after her, and shows her the sides of life she has never experienced before. But all the while thinking she is Baby. As Sea searches for the truth, will her discoveries bring them together or tear them apart forever? 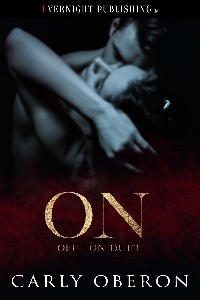 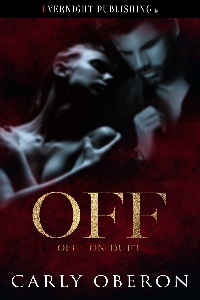 “No,” I said, continuing my head shaking from his earlier revelations while pulling the covers over my nakedness. “You don’t get to ask me those things yet. A lot has happened in a year. Terrible things. I’ve changed in ways you can’t possibly imagine. I’m not the same person you once knew.” I flinched at the truth of that last statement before looking Del squarely in the eyes. I needed him to get my point and fast. “I don’t want to discuss how I saved that man’s life right now. When I’m ready to talk, I’ll talk. You said before everything’s under my control. My call. Or were you not being truthful about that?”

Del paused for what seemed like an eternity but was probably just moments. He shifted off the bed and onto his throne chair in the far corner of the room, the one where I spotted his silhouetted figure the first night I awoke from whatever sedative he’d given me.

After some time, he ran his hands through his hair and down over his face, as if he’d finally made peace with the situation. Then, his gaze swept across the room to mine.

I nodded and exhaled in relief that he wasn’t expecting anything more than the little I’d just revealed. For now.

Slowly, Del got up and stood at the foot of the bed in my direct line of sight. Keeping his gaze locked on mine, he unbuttoned his shirt in silence and let it drop to the floor. He kicked off his shoes, unzipped his pants, and pushed them and his boxer briefs off his muscular legs with the coordinated precision I’d come to expect. He stood completely stripped, completely still, and watched in silence as I scanned his perfectly sculpted masculine form. God, he was magnificent.

He was studying me studying him. Again. Like the first night I awoke in his bed. After my hungry scrutiny took in his full erection and eventually returned to his face, Del finally spoke in that soft tone he sometimes used when he wanted my complete attention.

“You have all of me, Sea. My thoughts, my dreams, my future, my body, my life. Right now, I don’t want to talk anymore either. But I’d like you to remove that goddamn cover from your beautiful body. Your call.”

When he finished gawking, he raised his glistening eyes to mine. “Now grab the headboard slats with both hands and don’t let go. Your call.”

Lord, he wasn’t going to stop. Neither was I. I gripped the slats lightly so my hands wouldn’t go numb.

Del moved closer to the foot of the bed. “Now spread your legs as wide as possible. Still your call.”

As soon as I opened my legs, his tongue was on my clit, swirling, dancing, and twirling like an orally-choreographed tango, the down-and-really-dirty variety. Hot pulses sizzled through my insides as his tongue scorched its way across my sex. I screamed my climax into the stillness of the night. Electrocution by orgasm. It was divine.

Savoring the aftershocks, I moved my hands from the headboard to Del’s hair, through his short, dark, smooth-layered locks. He pushed his body upward toward mine, licking my nipples on the way. At the same time, he replaced one of my hands on the headboard, followed by the other.

More controlled reciprocity. Damn it. How did he do that? I decided rhetorical questions were okay for the moment.

I gripped the slats more forcefully while Del reached into the nightstand. After sheathing himself faster than usual, he lowered his hard, muscled body on top of mine and adjusted himself in perfect alignment with my entrance.

“I’m afraid this won’t take long,” he whispered in my ear. His voice had that familiar rasp, signaling he was close. It sounded like a song to me. I leaned up and kissed his cheek before he rose on his powerful arms and fully entered me with a single thrust. He already knew I could handle the pleasure-pain sensation of that. I loved it, actually, and didn’t give a shit why.

His next set of swift, body-jolting thrusts made my hands grip the headboard slats tighter to keep my head from crashing through the wall. My insides ached with desire as I felt his energy gush into my soul like white-water rapids with no barriers. We came within seconds of each other and fell asleep the same way.