Once Upon a Jade (MM)

All incubi have a price, a curse-specified number of couplings they require before their curse can break and they turn back into a human.

When Friedrich, the most popular jade in Idyll’s thriving brothel, gets hired by the mayor to clear an incubus out of the old haunted house on the edge of town, he doesn’t think much about what will come after the poor soul’s curse is broken. So he’s more than a little taken aback when the newly-restored Nathan first rebuffs him, and then backtracks on his initial hostility and seeks out his services again -- just for tea and conversation, of course.

Juggling a busy professional life, appeasing the friends he left behind to take the mayor’s commission, and teasing his best friend about his own budding romance, Friedrich doesn’t notice himself falling for the new man in town until it’s too late to go back. But does Nathan want more from Friedrich than he pays for? 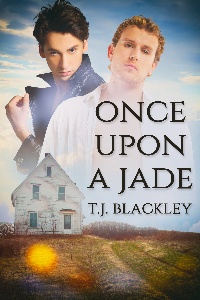 Once Upon a Jade (MM)

His first assignation of the night was quick and easy: an out-of-towner named Roger, who was staying at the inn for a few days on his way to the sea, and who desperately wanted to be spanked with the flat side of his own hairbrush and then gently fucked with the handle. Normally such a request would fall to Bian, but Bian was booked solid tonight and for the rest of Roger’s stay. Luckily, Friedrich had nagged him enough times that he’d cross-trained him enough to handle a simple spanking. Friedrich left Roger glowing in both sets of cheeks within forty minutes, and saw him out with his own glow of professional satisfaction.

He spent the remainder of that slot and the break tidying up his room and playing a one-man game with his cards, listening to the faint sounds from Ahmed and Prudence’s rooms that made it through the jadehouse’s thick walls. Ten minutes before Nathan was due to arrive for his slot he set the kettle on his small camp stove, heating the room further, and he lazily shuffled the deck of cards, wondering idly what game Nathan would want to play tonight.

The knock at the door came just as he laid his hand on the kettle’s handle to lift it, and he called out, “Come in!” The look on Nathan’s face as he let himself in made him remove his hand, though, and straighten up almost unconsciously.

Nathan’s expression was a mixture of nerves, determination, and a kind of banked but very discernible heat that Friedrich recognized instantly, and all at once he knew that they would not be playing cards tonight -- or, if he was very, very lucky, any other night either.

Friedrich had to do something about those nerves in Nathan’s expression, though, so, gently joking, he said, “I take it you don’t want tea tonight,” when Nathan made no immediate moves to speak or come closer.

Nathan shook his head. Friedrich was immensely relieved to see the touch of a smile grace the corner of his lips; he’d caught Friedrich’s tone, and knew that whatever he said next would be accepted. “No,” he said slowly. “Tonight I want something different.”

A focused sort of calm descended over Friedrich’s mind. Nathan, brave, beautiful Nathan, had taken a step onto ground that, for him, was unsteady and unsure, and it was Friedrich’s responsibility and great joy to show him that he was as safe as houses, here in Friedrich’s room.

A small voice in the back of his head was loudly insisting that this was no ordinary assignation, but Friedrich tamped it down. Now was not the time for doubt; he had to be there for Nathan.

Nathan had fallen silent again, so Friedrich said, softly and implacably, “Tell me what it is you want, Nathan.”

Nathan took a deep breath, let it out slowly, and then said, “I want you to take your robe off.” There was a subtle rasp in his voice that Friedrich had never heard before, and it fascinated him.

He didn’t hesitate to wonder at it, though. He didn’t pause for a single heartbeat, just moved his hands to the tie of his dressing gown and undid it. He shrugged the garment off with the ease of over five years’ continuous jading, feeling the soft satin slip down his arms as it fell to the floor, leaving him as bare as the day he was born.