Passion has no boundaries in the great outdoors . . .

From the concrete jungle to the wilds of Northern Ontario, Sierra Williams takes a management job at a remote wilderness resort. Forced to travel by boat with a guide who is both annoying and arousing, her fate is sealed when the boat springs a leak. They are forced ashore for a night under the stars waiting to be rescued, where nothing but the wind and the wildlife can hear her passionate cries. 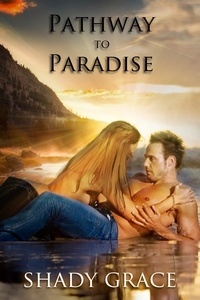 After working this last week, side-by-side with Gary, learning the ins and outs of wilderness resorts and campgrounds, Sierra had developed an easy camaraderie with the burly man. Watching Gary deal with customers in a casual, friendly manner was refreshing. She had yet to see an unhappy face. Oddly enough, she still didn’t know his job title. He seemed to be the resort’s jack of all trades, and from what she’d seen, a master of a lot more than one.

She’d come to admire him, although there were times when his teasing words annoyed her. His strength could be compared to a bear, she’d decided, after witnessing Gary haul forty-five-gallon drums on his shoulders the first day she’d arrived. Thick, corded arm muscles shimmered under the sun from sweat. A broad chest tapered to a narrow waist. He sure had an incredible body, and his green eyes looked exquisite against sun-tanned skin and dark brown hair.

He squatted down and rinsed the knife in the water.

Sierra stared at the white wife-beater clinging to his broad shoulders and narrow waist. She licked her lips, imagining a hundred possible positions a man like him could handle with such raw power at his disposal. He could probably pound her standing up with nothing for support but his own powerful legs. She looked away, her cheeks flushed, before he noticed her ogling him. “That’s quite the knife you have there,” she said, just to fill the silence.

Gary finished rinsing the knife and stood to face her, holding the blade at a dangerous angle between them. Sierra’s eyes widened and she stared at the sharp, shiny edge. He held the weapon so close her eyes nearly crossed looking at it.

“One flick of my wrist and I could completely remove your bra. Nice, eh?”

She swallowed. “I didn’t realize men thought about breasts while cleaning fish.”

“Men think about tits during any moment of the day.” His gaze slipped down to her chest. “And I must say, you have a healthy set of lungs.”