A Wizard in Waikiki 2

Ancient Tahitian wizard Konu has settled into daily life in Waikiki, Hawaii. Entrusted with a sacred mission to bring healing and hope to the islands, he begins to grieve his past more and more. Ripped away five hundred years ago from his lover, Loho, he has found a new relationship with Jason, who runs a local homeless shelter. But things are not easy. Jason is stressed, busy and not easy to connect with.

Things take a strange turn when Konu finds himself in old Waikiki as it was five hundred years ago. There is Loho waiting for him. Konu wants nothing more than to be in his lover’s arms, but he loves Jason, too. Then a young girl vanishes, having followed Konu into the mystical realm. Her disappearance causes a great spiritual catastrophe only Konu can avert, but how does he get back inside those beautiful, brilliant, peridot dreams? 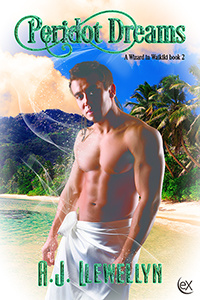 A Wizard in Waikiki 2

More From A Wizard in Waikiki 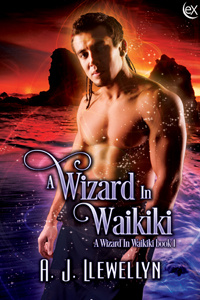 "What is circumspect? Does that have anything to do with your cut penis?"

Jason laughed. "No, you Neanderthal, it doesn't. It means you should be a little more cautious…be a little less honest with people."

Jason leaned on the table with both elbows. "Talking to you is like talking to a kid."

"Listen, things are confusing for me, too," Konu said. "This new world is weird. Flushing toilets…buses, cars, hair dyes, perfumes. Pants that have zippers. Now these I totally dislike."

"You dislike zippers? Why?"

"Because I fumble with them and I want so badly to be able to suck your cock."

"Dear God," Jason said, putting his face in his hands. "And you've got to stop saying stuff like that in front of people."

"Because it's too much. This is private information."

This confused Konu who had been taught honesty in all things. "Okay," he said, trying to find a compromise. "I can work on that but it doesn't mean I don't want to suck your cock."

Jason gave him a solemn look. "Glad to hear it."

"See, there are things I dislike about the modern world but do I blame you?" Konu lifted his hands, as if in surrender. "No, I don't. So you shouldn't blame me for coming from a different time and times."

"Fair enough." Jason drained his coffee. "I have to drive over to Ewa Beach before sunrise. I have Child Protective Services meeting me there for a surprise dawn raid on the new families."

"Okay." Konu was desperate. He didn't want to part for the day without some hope of marriage with Jason. "Mingo McCloud's getting married," he said.

"Yes, sweetheart, I know. But he and Francois have been together a long time and besides, they have Francois' son living with them. That's a different situation."

"How long should we be together before we get married?"

"I don't know." Jason sounded exasperated. "I have to jump into the shower and get ready. If you promise to be good and not get naughty, we can shower together."

"If I must." Konu's face must have reflected the misery he felt. Jason moved out of his seat and came to him. Konu pulled the man onto his lap and kissed him. Jason squirmed at first, but with Konu's hand tugging gently on Jason's cock, it was evidently hard for Jason to keep up his stern expression. He began to gasp.

Konu's cock hardened against his lover's wonderful ass cheeks and he would have loved to fuck him, but he decided sucking Jason's cock would relieve some of his stress and send him out the door with a smile on his face.

He picked Jason up and propped him on the kitchen table, Jason's knees hugging Konu's head. His legs and ass opened up to Konu who began with a long slow lick across Jason's ass cheeks, along his ass crack and to his balls, which for some reason Jason always shaved. Konu wasn't sure it was a bad thing since it made the ball sac look so huge. He tugged with gentle lips on first one ball, then the other. He moved back to Jason's ass which smelled and tasted of Konu. They had, after all, been making love all night.

Jason started to make a racket.

"Oh, my God," he said over and over, leaning back, feeding his balls and ass to Konu, who knew Jason's body so well now that he knew the right moment to pull back and find another sensitive spot to pleasure. He licked along Jason's inner thighs, his lover jerking underneath him. Jason suddenly grabbed Konu's head and shoved his cock into his mouth. Konu could hardly breathe the way Jason was humping him, but he didn't care. Jason was close to coming. He worked on breathing each time he came back up as he sucked Jason's huge, rigid shaft and plunged back down again.

He decided to make his lover wait. Jason went berserk, hollering when Konu picked him up and carried him down the hallway into the bathroom.

"Suck me, oh God, suck me," Jason chanted as Konu held the man in his arms.

"Turn on the taps," Konu said. Jason reached into the shower stall and did as Konu instructed.

"It's ready." Jason whimpered when Konu set him down on his feet and bent and claimed that hard, spearlike cock again. Konu pushed him into the shower and soaped his lover's body. Jason's eyes showed his advanced state of desire. Hmm, that would teach him to tell Konu not to be naughty.

He knelt beside his lover, the cool water washing over them as Konu guzzled on Jason's cock again. In Konu's experience, sex in bed was nice, sex in water, unbeatable. Jason began humping his face, his orgasm once again close. Konu closed his eyes and tightened his mouth, gripping Jason's clenched ass cheeks in his possessive hands as his lover came hard and deep in Konu's throat.

When it was over, Konu stood and kissed the racing pulse in Jason's throat. Jason opened his mouth but didn't seem able to speak.