Peter G has finally come of age, and his life as a grown-up pixie man should be speeding ahead. Unfortunately, he’s stuck, waiting for the love of his life to arrive. When they were children, they promised to meet, but where is she? Why hasn’t she come?

His cousin is busy with his wife and two children, his friend Joe is moving on in the human world, but Peter G is stuck running messages for friends and family.

One day his sister-by-love, Pia, sends him to visit Barbie, the human woman who used to be her husband’s girlfriend. This entails time in the city and a hair-raising interview with Barbie’s hostile husband—but on his return, he finally meets his long-awaited Gentian at the crossing gate.

What should be a time of joy and celebration quickly descends into trouble and worry when he discovers he must deal with the imperious Mistress Dandelion as well. Life is suddenly complicated. 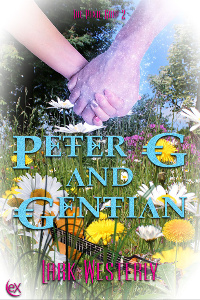 More From The Pixie Grip 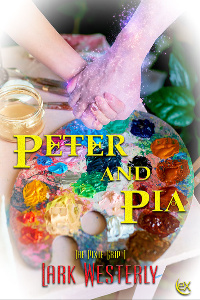 On the day when Peter G finally gained enough years to be considered a pixie man rather than a lad, his big cousin came to visit. His name was also Peter. They shared one set of grandparents as well as part of a name. Officially, Peter G was Salix Peter Grene, but most folk called him Pete or Peter G. The elder Peter, who was officially Peter Alexis Peckerdale, didn’t mind.

“Family name. Great-grandad had it, too,” he’d said when Joe Bakewell, another by blood friend, had commented on the possible confusion of having two pixie men named Peter in the same family circle. Joe was three-quarters human, so maybe he couldn’t be expected to understand.

Peter had added that Pia, his miss, his wife and the object of his focused devotion forever, had forbidden him to name any of their children anything beginning with P. “Except for Kris, of course. He’s got it as a second name. Fucking odd lad, our Kris.” He’d sounded proud of the fact. Oddness, where Peter P was concerned, was something to be embraced and possibly celebrated.

Birthdays weren’t a big thing in the pixie forest, but having enough years was an important milestone. Enough years was eighteen. It had always been so, since the fay considered that if anyone who had attained that age had failed to attain good sense, then the situation was hopeless. An enough years pixie or elf or braesider or whatever could set up house alone, wed a forever, enjoy friendlies or bedding with any other enough years person willing and unattached and go wherever she or he wanted, without reference to anyone else.

Peter Peckerdale’s wife, Pia, had celebrated her attainment of enough years by going off by herself to make a wish, after which she’d found herself a bit far from home and settled down on a blanket to sleep until morning.

“Mind, I did send a note to Mum and Dad to say I wouldn’t be home for supper. That was only courtesy.” She’d said that quite loudly, with a sapient eye on her lively ten-year-old daughter, Melody.

It would be eight years before Melody could go jaunting off wherever she chose. Pia was getting in early.

Peter G had never asked what happened that night, but he’d gathered Pia’s explicit wish for a pixie man of my own to love forever had somehow attracted Peter P, who was desperately unhappy over losing a human girlfriend. He found Pia and tumbled into her loving arms. He’d stayed there, figuratively speaking, ever since.

As far as Peter G could tell, neither one of them had ever regretted that for a second, even when they were having a noisy difference of opinion.

On the morning of Peter G’s birthday, Peter P turned up, frowning.

“Greet you, Pete.” He opened his arms. “Got a hug for your fucking old godfather?”

Peter G gave him their ritual hug. “No harm,” he murmured, again as a ritual.

“Never between you and me.” His cousin sounded unexpectedly serious.

“She’s taken Melody and Kris to see Granny Tess. She says she’ll see you later.” He gave Peter G a sudden lopsided grin. “If we were over there and if we were humans, I’d be taking you to the pub to drink your first official beer. Mind, you’d have to be twenty-one for that.”

“You could always get me some poteen.”

Pixies were almost entirely immune to the effects of alcohol. It took leprechaun poteen to give them a buzz. No one seemed sure why that worked. Even the leprechauns claimed they didn’t know.

“Any time,” Peter said. It was clear he had something else on his mind.

“So, as your godfather, I’ve got to give you some advice.”

“Not if you don’t want to,” Peter G said hastily but politely.

“Well, has your dad had a word? Or the grandads?”

“Rory Inkersoll? He’s a good man for advice. He’s a vicar, but he’s got a lassie and three children, so he knows what’s what.”

“Peter, what are you going on about?”

His cousin’s cheeks, normally a dark olive, were flushed with green, a sure sign of pixie discomfort.

“When I got enough years, I went over there for a while to try living human. Remember?”

“Yes. I was just a little lad, but I missed you. You let me look after your goats and the cottage.”

“You did a fucking good job, too. Though what the bogle I thought I was doing, leaving a lad your age in charge, I have no idea.” His frown intensified, and Peter G thought he was probably considering his son Kristos, who was around the age Peter G had been then.

His cousin got back to the point. “Prue Leilana made some arrangements for me. Do you know her? She’s some kind of cousin of Granny Jewel. Wed to a trace fay called Eckmann. She got me a room and so on, but she never warned me about fucking humans.”

“You knew plenty of humans. You’d been sponsored, same as me.”

“Yes, but there’s a good reason we get sponsored at the age we do. Limits the harm. Too young to conjure on the first round…well, most of us are…and too young for bedding on the second.”

He’d been over sixteen when his turn came, mostly because he’d spent a year minding two cottages for the Inkersolls, who had spent that time in Erin a’ Fee.

“Peter, what is this about? Really? You’re green.”

“All right. Yes. You like looking at misses, right?”

“Yes.” Peter G got an inkling of what was going through his cousin’s mind. “It’s all right. I know not to look too long at a miss who’s bedding with someone else.”