Carlton Perry didn’t know what he was in for when he purchased his antebellum home. Eric Slade couldn’t imagine what would occur when he met Carlton.

In a place where unimaginable horrors had occurred in the distant past, the two men discover one thing. They find an old love so strong that it refuses to die. 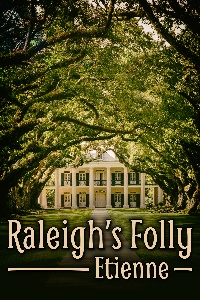 Wade Raleigh was celebrating his twenty-first birthday by riding his new horse -- a birthday present from his father -- through the cotton fields, when he spotted a young slave he’d been keeping special track of. The slave was Wade’s age and was busily applying his hoe to the weeds growing around the cotton plants. The only thing that made him stand out from the other field hands was his mulatto skin and slight build. Wade raised his voice, and said, “Come over here, Moses.” The slave stood, dropped his hoe, and walked over to Wade. Wade reached down, grabbed Moses’ hand, and pulled him up behind him on the horse. Then he quickly rode the horse down toward the creek. When they’d reached his favorite totally secluded spot, he dismounted. He gave Moses a hand down; then he tied the reins of the horse to a low-growing bush.

“It’s hot, and I think a quick swim will do us both a world of good.”

With that, Wade began to shed his clothes, and Moses slowly followed suit.

“I knew you’d have a great body underneath those clothes,” Wade said, as he watched Moses undress, then he jumped into the creek.

As Moses pulled off his garments, he’d begun to lose his shyness, and they were soon splashing water at each other like young men do. Their time in the water included a fair amount of ‘accidental’ groping, and finally, when they exited the river and embraced, there was no doubt in either man’s mind as to what would happen next.

They settled down on the grass on the bank of the creek and began the affair that would eventually set everything else in motion.

Eric began to shiver, and Carlton said, “What’s the matter?”

“All of a sudden I’m freezing cold, and I had the strangest sort of… I don’t really know what to call it. It was like a waking dream, but it also felt like a flashback to another experience.”

“What can you tell me about it?”

“I was riding a horse through cotton fields, watching the field hands chopping cotton, and I seemed to be almost lusting after a young mulatto guy.”

“I’ve never ridden a horse in my entire life, and I’ve never been attracted to, for want of a better term, dark meat. Then the two of us got naked and went swimming in the creek, and after that, we ... we had sex.”

Carlton looked down at Eric’s groin. “It must have been one hell of a dream,” he said. “You’re half-hard, and It looks like you’re dripping semen.”

Eric looked down at his body, then he gave Carlton’s torso a thorough inspection. “You seem to have the same problem.”

“Yeah, and that’s because I had the same experience, only I was the field hand.”

“That’s almost too crazy for words,” Eric said. “And what the hell does it mean?”

They’d been dressing while they talked and had just gotten into Carlton’s truck.

“Tell me about your dream,” Carlton said, as he started the truck and put it into gear, “and I mean every little detail you can remember.”

“Okay,” Eric said, and began to describe in detail what he remembered of the dream.

“Did the field hand have a name?” Carlton said. “And for the record, he wasn’t a field hand, he was a slave.”

“Think about what you were wearing. It was mid-nineteenth century clothing, wasn’t it?”

“Geez, I don’t know. It felt odd, but the dream was so fleeting that I didn’t have time to analyze everything. And no, I don’t remember thinking about the guy’s name. Where’s this coming from, Carlton?”

“It’s coming from the fact that I had the same dream, and I do mean the same dream -- except that I was the slave looking up at the master on his horse.”