Imprisoned with the Wolf (MM)

Michael remembers nothing before his cell. He's a monster, a prisoner to be used. An attack dog that will tear anything put in front of it to pieces.

Until one day, someone is thrown into his cell with him. "Eat," his captors say. But no. Some semblance of the man he is returns. The wolf will not eat. It cannot.

This is his mate.

Jason is terrified. The enormous wolf in the cell with him is closing in, and they said it was going to eat him!

Except...it does not eat him. It transforms into a man, a handsome man who promises Jason protection at all costs. They'll have to work together. They'll be stuck with each other for a while, but all things considered, Jason won't mind sharing a cell with this man while they work out an escape plan, so long as he doesn't end up on the menu.

Imprisoned with the Wolf (MM) 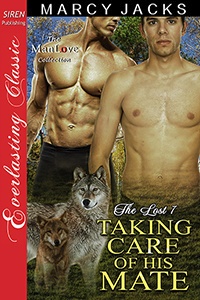 “Let me the fuck out of here!”

The banging was loud, like a blunt hammer smacking against the glass walls on the inside of his skull.

Every strike against the door sent a knife of ugly pain through his eardrum.

“You bastards! Get me out of here!”

That voice. So sweet. Delicious. Like it was made for him.

The only thing that got in the way of his enjoyment of it was that constant banging sound.

Something was wrong. Where was he?

And who was that?

He growled, standing on all four paws.

The human, the male human, spotted him, and like the skittish rabbit that he was, he fell away from the door, falling into the corner of the little metal room they found themselves in.

A new voice sounded. A wrong voice. As though it were coming from above him, all around him, full of static and far away.

“This is for you, Michael,” said the voice. The voice he despised. “Eat.”

“No,” the other man wailed, trembling like a frightened rabbit in his corner. “God, no, please!”

Not that he could recall much else ever since… Well, he didn’t know.

The only thing he knew was that he had been here for a long while.

And now this man was here, and somebody was telling Michael that he needed to eat.

Michael was hungry. So damn hungry. The smell of him was…tasty, but not in that way.

His stomach rumbled. He couldn’t even remember the last time that he had a meal.

Oh fuck. What if the last time he had eaten, it had been a person? A person just like this.

Somebody scared. Somebody who didn’t deserve to be here.

“Please. Please,” the man begged, tears streaming down his cheeks.

Oh fuck, I need you,” Jason said, his voice breathy as his hands reach down and stroke Michael’s cock.

Jason sounded breathy and a little drunk. “I fucking need you. Please.”

He took a quick stock of himself.

He hadn’t eaten anything before coming here. No time to eat anything when he was out on a job. The only food they had was what was delivered to them.

“Did you drink anything recently?”

“Did you eat anything?”

“No. Why?” Jason sounded slightly concerned, but it wasn’t enough to stop him from stroking Michael’s dick as though he couldn’t get enough of it.

Or was doing it subconsciously.

And again, that stupid need to be as honest as possible with this man came rising back to the surface. “I’m worried that we might have been drugged.”

Jason’s hands stopped. “Do you think we were?”

Michael took a sniff of the air, then leaned in and sniffed the side of Jason’s throat.

Fuck, that smelled so damn good.

That was something they could fix on their own.

Actually, Jason seem to be on the same page. He grinned up at Michael, no longer concerned about the potential drugging.

“Are you going to touch me?”

What kind of question was that?

He had to be careful with Jason’s clothes. Neither of them had many, and ever since they came here, none had been washed.

Meaning that if Michael tore them to pieces, Jason would not likely be getting more.

That was the only reason why he didn’t rip Jason’s clothes right off of him.

Instead, he forced his hands to be gentle as he unbuttoned his pants and pulled at the zipper. Jason shivered, his hands sliding to the back of Michael’s neck and around his waist. Jason’s lips were warm and so goddamn welcome as he kissed Michael’s shoulder and neck and jaw.

He kept saying that. Again and again.

Michael never got tired of hearing it.

He sank to his knees.

“I’ve been thinking about that since the first time I saw you,” Michael said, taking Jason’s cock in hand before sinking his lips around the head and then the shaft in one sleek and swift motion.

Which was fine. Michael welcomed it. Any proof of their lovemaking, that this was no dream, would be fantastic.

He moaned around his mouthful, hollowing his cheeks, sliding his tongue around the base.

Had Michael done this before? Before he had been kidnapped and thrown into this room?

He couldn’t be entirely sure, but from the sounds that Jason made, it was clear that Michael was fairly good at this.

He was a little stunned to realize that, but also grateful. He didn’t want this to be terrible for Jason.

He wanted their first time together to be absolutely perfect.

Timidly, as though worried, Jason began to slowly thrust forward. His hands brushed through Michael’s hair.

As though he were trying to see Michael with his hands.