Son of a Preacher Man (MM)

Dario Russo grew up on the road. The son of itinerant workers in California, he had no friends, no stability, and no concept of a normal life. Until the age of sixteen, when he meets Reverend Waters’ son, Billy Ray. The relationship is short lived, but it haunts Dario for the next thirty years. At the age of forty-six, he has the opportunity to return to Crows Landing, California, and the chance to track down the man who had meant so much to him.

But what he finds in Crows Landing is the last thing he expects. So wrapped up in his hopes for a second chance, he almost misses the very real interest from a local, Shawn Pederson. Shawn might not have the past working in his favor, but he’s willing to offer the future Dario always wanted. 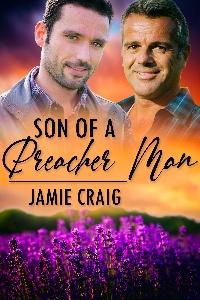 Son of a Preacher Man (MM)

One of the waitresses brought a plate of chili fries and set it front of the stranger. Dario couldn’t hear what was being said over the music blaring from the speakers in the far corner, but he saw the man shake his head and gesture toward Dario instead.

He frowned when the waitress picked up the plate and carried it down the length of the bar.

“Here you go,” she said with a bright smile, sliding the plate in front of him. “Enjoy.”

Dario waved his hand. “I didn’t order this.”

Her smile never wavered. “Doesn’t matter. Would you like anything else?”

“I don’t even want ...” Dario’s words faded as the waitress turned and walked away. His gaze sought out the stranger. And the stranger looked back, boldly meeting Dario’s eyes for several beats before nodding at the plate. Dario quirked his eyebrow in a silent question.

The stranger picked up his beer and drained it, then rose from his stool. Grabbing a tan canvas jacket from the stool in the corner, he held it in one grip at his side as he came around the corner of the bar toward Dario.

He stopped two stools away and jerked his chin toward the fries. “I figured since you’re new around here, I’d save you the hit or misses from the menu and just order the hit for you.” The corner of his mouth lifted, and he took a step back. “Welcome to Crows Landing.”

“So are you on the Crows Landing welcoming committee, or what?”

A full smile now, though he retreated another step. “No, nothing like that. I’m not sure anyone around here would even think of having a welcoming committee for this place. You’ll find that out soon enough. Have a good night now.”

“Wait. Do you usually feed strangers and then run? Did you already pay for this?”

“It’s taken care of, don’t worry. But you don’t want me to stick around and bother you while you’re eating. Go ahead. Dig in. I promise it’ll be worth it.”

Dario didn’t want to let the stranger go. Other than Ruby, this man was the only person he had spoken with all day. “Will you tell me your name?”

The man stretched out his free hand. “Shawn Pederson.”

Dario took it, surprised by the way the other man held his hand. The grip was firm without being painful. “Good to meet you, Shawn. Dario Russo.”

In spite of the bar’s murky lighting, it was easier to make out more details when Shawn stood this close. Hazel eyes. A slight bump in his nose like he’d busted it once. His nails were short, but well trimmed. He had the body and face of a man ten years his junior. He had the eyes of one decades older.

“If you decide you want something sweet, go down the street to the Shell and pick up an ice cream.” Shawn dropped his hand and glanced back to see where the bartender was before adding, “Desserts are part of the misses here.”

“I think that tends to be a universal truth when it comes to bars,” Dario said lightly, casting around for something else to comment on. Anything to keep the conversation from floundering. “Are you from Crows Landing?”

“Yeah. Lucky me, huh?” He laughed, though it was more than a little hollow. “It was good meeting you. Enjoy those fries.”

This time, he was gone before Dario could stop him with another desperate topic of conversation.

Too Thankful For You
AG Meiers
In Shelf
$0.99
Tweets by
sirenbookstrand