Lucy works hard to run a food truck with her cousin, but her comfortable routine is scrambled when A-list celebrity Mark steps up to the order window. Can they make their love sizzle, or will their very different lifestyles burn them? 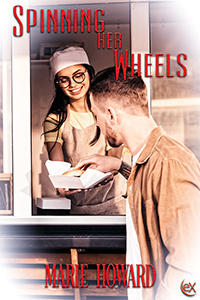 More From Love To Go

Lucy smiled and handed a heaping plate of tacos out of the food truck’s window. “Here you go, Sal,” she said, reveling in the man’s giddy grin as he took the plate from her. He handed her a wad of damp bills and three quarters. He knew exactly how much his usual order cost, and Lucy knew that.

Even though it was a few days after Thanksgiving, the winds were blowing through, and it was approximately 90 degrees outside. The heat and dry air made anything that wasn’t exposed to air absorb all the sweat, all the damp, and all the moisture. The truck was festooned with multicolored Christmas lights, and music flowed out of a speaker strapped to the panel raised above the serving window, serving as an awning. Tonight’s music was a CD called Merri-achi Christmas, and Lucy was pleased to see that everyone waiting for their orders was bobbing along to the festive music, even if it was just a little. This was her all-time favorite time of the year.

She turned back to her partner in crime, Hugo, who was flipping tortillas on the grill. They’d been each other’s favorite cousin for as long as they’d had opinions about things. He took a moment to flash a quick smile at her. His forehead glistened with sweat, and the bandana around his head was soaked.

“It’ll be a good Christmas,” she replied.

Hugo grinned widely. “Finally. Marcos only wants one thing this year, but it’s the new Playstation.”

Lucy sucked air through her teeth as she headed back to the order window. “That’s not gonna be cheap.”

He shook his head and sighed. “Good thing he did good in school this year, or his mom’d kill me for getting it for him.”

“Don’t let her do that. I need you here,” she said over her shoulder.

When she turned back to the window, her stomach did a somersault. A ruggedly handsome face was at the window, one she’d seen on movie screens and the TV thousands of times. Mark Hayes. The Mark Hayes.

The crowd around the truck stood back a few paces from him, but all fixed gazes were on him.

He must be taller than most actors, she thought, since his familiar face was level with the order window.

“Hi, what can I get for you?” she squeaked out.

She was shocked. Who came to a taco truck and took recommendations? “Uh, people like our sopes, and the carnitas are good.”

She shouted his order back to Hugo, her gaze still fixed on Mark’s. He smiled slightly, casually. Lucy felt like they’d known each other for years, but she told herself it was only because she’d seen so many of his movies.

He stared at her for a moment, his gaze locked on hers. Her stomach fluttered, and her cheeks went heated.

A smile crept onto her face, without her permission. She enjoyed hearing him say her name.

“Order up!” shouted Hugo, tossing a plate her way.

Reacting slowly, she grabbed for it, barely avoiding dropping it onto the floor.

“What’s your deal, Luce?” He looked out the window. “Oh, shit, hey, Mark Hayes. What’s up?” Hugo peeled off his hygienic glove and reached his fist out the window. The star bumped it with his own. “Hey man, can we get a picture of you in front of the truck?”

Hugo was halfway out of the truck before Mark agreed.

“I think there are plenty of pictures,” Mark said, nodding at the group of people around them with their phones out.

“Yeah, but we gotta get the sign in ours. It’d be good business.”

Hugo shoved the plate of sopes into Mark’s hand and dug his phone out of his pocket. He framed it so that the two of them, the truck’s sign, and Lucy’s face in the window were all in the shot. He snapped it quickly, and Lucy could see from the window that he’d gotten it perfectly. He’d had plenty of practice getting good pictures of his fast-moving kids. Hugo turned and shook Mark’s hand, grinning and slapping him on the arm.

“Not too bad for Batman,” he said.

Mark grinned a sly smile. “That’s not a confirmed role,” he said, with a wink.

Lucy watched this surreal scene go down through the order window. In true Los Angeles fashion, a young woman strolled to the window without looking up from her phone screen.

“Sure thing,” Lucy said. She leaned out the window. “Hugo, time to work.”

Hugo bumped fists with Mark one more time, then trotted back into the truck.

“He’s cool,” he said, as he tossed chicken and tortillas onto the grill. Lucy peeked out the window. The woman who’d ordered chicken tacos still hadn’t noticed the commotion of an A-list celebrity nearby or just didn’t care. She was still scrolling on her phone. Much of the crowd was crowding in for selfies or laughing as the star tucked huge bites of carnitas and thick corn sope into his mouth.

A noticeably alert black man in a black suit loomed nearby. Obviously, someone of Mark Hayes’s stature would need a bodyguard, but Lucy was taken aback.

The chicken tacos were ready, and Lucy took them to the window. The woman must have been paying more attention than it seemed. She grabbed them from Lucy’s hand without even looking up. She handed over a few rumpled bills and walked away, even though frenzied fans still surrounded Mark Hayes.