As a humble scribe living out a humdrum existence in the City of London in Elizabethan times, Stephen finds his escape across the river amongst the crowds of the teeming theatres where he is transported by the spectacle.

But poetry isn’t everything. When a young Welsh actor called Ioan catches his eye, he’s tempted to overcome his shyness and make his acquaintance. Is Stephen out of his depth in this colourful world with its undertones of danger? Or might there be a slim chance that Ioan can return his feelings? 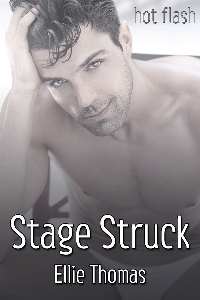 “That’s my cousin Beth,” Ioan said in explanation. “I stay here with her and her husband, William.” He grinned. “I came to London to help out when William fell off a ladder and broke his leg and an extra pair of hands was needed urgently. Quite a few players drink here and I got to know them. Once Will had recovered, rather than going home, I got my chance to act.”

“How did that happen?” Stephen asked, intrigued.

“Oh, the usual thing,” Ioan said laconically. “One of the bit-players was in a drunken brawl and got himself stabbed. Not in here, thank the Good Lord,” he added quickly, “and not fatally either. The Lord Admiral’s Men needed a hasty replacement and since I was in the habit of hanging around backstage at The Rose when I wasn’t needed here, I had a good idea of what to do. So I got hired on the spot by Mr. Henslowe. Not that I have to say much, just get on and off the stage at the right time,” he added modestly.

“Beats helping my father sell leather goods in Abergavenny,” laughed Ioan. “I’ve had some good fortune, so I’m making the best of it while I can. What about you? What do you do?” He asked with genuine interest.

“I’m only a scrivener and not even apprenticed to a notary as yet,” Stephen explained, “although I hope to be, and then eventually be promoted as a notary in time, with luck.”

Ioan smiled, “A man with ambition.”

“A man with not enough coin to fulfil his ambitions,” Stephen said, grinning, starting to relax.

As Ioan opened his mouth to remark further, both men heard his name called across the crowded room and turned to see Beth beckoning.

“Time to earn my keep,” Ioan said with a rueful grin. As he rose, Stephen started to gulp down his ale, swallowing his regret that they could not talk further. He was surprised when Ioan laid a hand on his arm. “Don’t rush, unless you have to? The food’s good here and I can join you for supper later.”

Stephen looked up at him in surprise and saw warmth and a hint of promise in those dark brown eyes. “I can stay,” he said almost hoarsely and was awarded a dazzling grin.