The Curse of Flight (MM)

Josh, a lonely trapeze artist, thinks he’s cursed. It’s an old family superstition. He can’t have sex on a day he flies or he’ll fall. Maybe that’s why he’s never had a steady boyfriend, though sometimes he dreams of one. In his show, a strange melody plays in the background. It follows him and surfaces from time to time on the street. When Josh’s uncle hears about the music, he tells his nephew to bring the old ring, passed down from generations since the time of the curse.

Steve is a realtor who always reaches his goals, in sales or otherwise, and he moonlights as a dancer in an all-male review on The Strip. All his friends his age are married, and his best friend’s wife Genie wants to see him hitched, too. He’s a little bit challenged in the relationship department, though. He has some growing up to do, or maybe it’s his problem in bed, where he’s somewhat one-sided.

Steve and Josh meet one crazy night when Josh breaks all the rules used to protect him from the curse. After that, he runs. If it wasn’t for Genie’s matchmaking, Josh and Steve might never see each other again. Though not yet ready for a boyfriend, Josh does need a realtor. What a good way for he and Steve to get to know each other, while Josh works up the courage to tell Steve about the curse.

Still unaware of Josh’s problem, Steve falls in love with him. When Steve finds out about the curse thing, it’s a big disappointment, but he wants Josh anyway. There’s no doubt Josh is worth the wait.

Maybe the curse isn’t real after all. Can lonely Josh overcome his fear of it? Can horndog Steve handle a curse? Is the answer in the ancient ring? 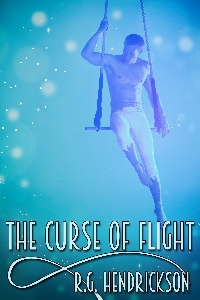 The Curse of Flight (MM)

Leaning on the door, Steve took another drag. “What do you want?”

“I know what that is, what you do.” Steve exhaled. “You wouldn’t tell me.”

The smoke triggered Josh’s memory, not about the fuck, unforgettable, but the short conversation before. He flashed back to the expressions on Steve’s face.

Josh hadn’t paid much attention at the time. It wasn’t like talk was the focus of the evening. Whatever he said or didn’t say, he hadn’t realized it mattered. Now Steve seemed aggravated at him for whatever it was. Odd.

“You never told me you were a dancer.” Josh went on the offensive.

“You never told me that either.”

Josh didn’t want to hide and struggled to make sense of it. “Would you have believed me back then, if I’d told you I came from a long line of trapeze artists and circus acrobats?”

Steve’s eyes fixed on Josh’s jacket where it hung on the gym, and feet followed. He touched the lapel. “You’ve got a point, I guess. It wasn’t like a date or anything. I didn’t know you. Maybe I wouldn’t believe it, not at first, but definitely by morning.”

He touched the leather and got a far-away look in his eye. The forced smile fell away, and the hint of a real one took its place. His hand dropped from the coat, but eyes stared and smiled at it.

Josh chuckled under his breath. For a minute he wished he was in that jacket when Steve touched it. He might have liked to get to know him better, if not for the curse. Sorry now for having hurt his feelings back then, Josh wanted to make it up to him. A sentiment came to mind. “Do you know the day of the week it was when we met? I do.”

Steve’s eyes left the coat and looked at him without hesitation. “Yeah, of course, it was Tuesday, early.”

This guy surprised him. “How did you know that?”

“Why wouldn’t I? You told me it was your day off.”

“Oh.” The curse assured a Tuesday. Unaware of the significance, Steve remembered the day off.

Since that Tuesday, in Josh’s dreams, someone like Steve had met him. Now that misty face in the dream grew fondly familiar. Josh regretted having treated the real Steve so badly.

They studied each other across the room. Steve stood by the coffee table next to the door. Josh sat on the arm of the couch, one foot on the ground and the other leg against the mattress.

Josh imagined the torso beneath Steve’s button-up shirt. In fact, he’d come across that chest many times, not only in his dream, but on billboards near the airport and the marquee he’d seen that night. He should have recognized him but didn’t. He’d lost his focus, paid too much attention to too many details and missed the important one.

Steve walked to the bed and sat by him. The gold-leafed nymph winked. Maybe Josh imagined it. She lit one side of Steve’s face, the other side in darkness. Josh focused on the shadowed lips. They moved. “Look, I’m disappointed I couldn’t see you again, but I’m a big boy. I’ll get over it. Sorry I was mad. It’s unprofessional, and what’s the point of pouting. If you don’t like this one, let me show you something else. My father’s been in the business for years and says a house is a better investment. Who knows how much the maintenance fee’s going up next year? It’s already too high on this place. I do have your number, now, but I won’t call. If you want my help, you know where to find me.”

“Thanks Steve, I appreciate that.”

Steve spread a palm on the mattress and leaned on it. “Is there anything else you want to see?”