The Next Phase Outcasts 2

Mitch Kessler, gargoyle, is back, along with his girlfriend, Callie, a former gender shifter, his best friend, Joe Chambers, a spinning top, and Neil, their rock-man sometime ally.

Mitch and Joe help the police force of Independence, Oregon, fight crime, but their efforts go totally unreported by everyone. While that bothers Mitch, what bothers him more is his best friend’s rapid aging. Joe is dying, and no one seems to know how to stop it.

Except one person—Harmon Carson, an army general. Carson promises Mitch, Neil, and Joe, a cure for their condition, contingent on them finding a renegade scientist who carries the secret with him. The four volunteer, but soon find out that Carson has his own agenda going on—and it is not a friendly one.

With time running out, Mitch has to find the scientist who may be able to help them, assist another mutant called Niles, rescue his girlfriend, and fight the hordes of the unholy that Carson calls forth. Once again, the Outcasts are the underdogs, and only time will tell if they can prevail. 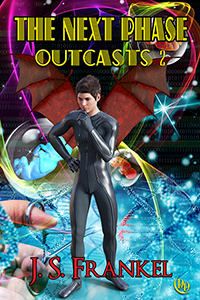 The Next Phase Outcasts 2 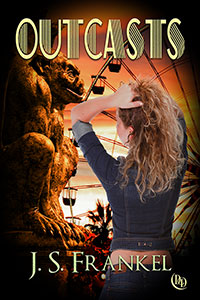 Owls hooted at me and then fell silent as I winged my way past them. Other denizens of the night—bats—also resented my presence, voicing their disapproval in squeaks and chirps. They felt at home in the darkness. I never had.

Truth be known, daytime flying didn’t do it for me, either, but for me, night flying had to be the worst. Trees were out there. In addition, there were aerials and electrical transmission towers to worry about. One wrong move and it was fry city, but to the populace of this fair city, it represented something different. To some, it was cool. To others, it meant danger.

And to one kid who’d spoken to me a month ago, it represented something otherworldly. “Flying, you’re really flying,” he’d said. “I thought it was for a movie or something.”

I suppose I could have driven. I did have a license, after all, but flying was much faster.

While doing my job, patrolling the city on behalf of the police, I’d landed at the edge of a park in the early afternoon, but so far, no danger reared its ugly head, and nothing seemed out of the ordinary. Of course, the bystanders stared. That’s what people did. It was natural to stare at those who were different, and those who had wings—me—were rare, so they stared.

No, not rare—strike that. I was the only one of my kind. Thus, people stared. Or gawked, or gaped. Whatever…but they rarely, if ever, spoke to me. It simply freaked them out too much.

Then this kid, no more than ten years old, saw me fold my wings into my body and ran over. Kids could lie, but from the earnest expression on his face, he didn’t seem like the fibber type. “Yeah, it’s something I do,” I replied.

The park wasn’t too far from my house. Independence wasn’t the largest city around—more like a suburban getaway, population eleven thousand or so—so everyone knew each other. This kid, though, I’d never seen him before.

Said remark came from an older man in his early forties, who hustled over and put a protective arm around the boy. It was his father, and he gazed at me nervously. “We were visiting friends here, and my boy saw you and your, uh, friends, on the news. You’re Mitchell Kessler, aren’t you?”

“Yes, sir, that’s right.” I never used my full first name. Only my mother did. “Call me Mitch, please.”

From his tone, flat and impersonal, he didn’t seem to be overly impressed. “Yeah, right. So…you catch any criminals yet? I mean, you know, when you—”

Abruptly, his face turned red. The truth will out and all that. “Yeah.”

Uh-huh, it figured. They were all alike, the reporters and the general public. They just had to see what modern genetic manipulation could do. Better than a movie! “So, you wanted to see the gargoyle guy, is that it?”

Mr. Visitor looked most uncomfortable, and the red hue on his face deepened. “Well, my boy is into superheroes, and…”

He didn’t finish the sentence, and I strived to keep my temper under control and my tone even. What kind of BS was he feeding me about superheroes? If someone wanted to see laser beams and magic and whatnot, then they could go to the theater. This was on the real.

“Tell you what, mister. If you want to see me transform, keep talking. I only change when someone makes me angry. Do you understand?”

Apparently, he did, as he’d mumbled an apology and gently guided his son away, never glancing back. That figured, too. Not many people wanted to get to know me. Those that did only wanted something. What did they want, anyway? Swag? An autograph? A free ride? Human nature truly bit at times.

And now, back to the present. Cool air rushed past me, but changes in temperature had never mattered much. No, it was the changes I’d experienced over the past one-point-five years. If someone hadn’t known the facts about me and my friends, they’d have wondered why all the fuss.

Fuss point number one—I was a gargoyle. The gargoyle part, which consisted of leathery bat wings, blackened skin, hideous features, and incredible strength, only happened when I got pissed off. Television shows often showed transformations such as mine. CGI could do a lot to make a person believe it was real.

However, that was television. Now, reality intruded in the most uncomfortable of ways. I could control my wings coming out. That happened through concentration and willpower. What I had a hard time controlling was my rage. Anger management issues were a constant thing for me.

Fuss point number two—my friends didn’t have it any easier. Joe Chambers, my best friend since grade school, was a spinning top. With no super strength, his speed did the talking.

At the very least, he looked normal, but his eating was off the scale. Although he wasn’t overly tall—five-seven, lean, with a shock of blond hair—he ate approximately ten times that of a normal person, and he ate anything and everything, even the weirdest combinations, like tuna and chocolate sandwiches, pizza with guacamole and strawberries, and other concoctions guaranteed to make a person swear off food forever.

However, as of late, he’d developed some lines around his face, which made him look like he’d come out of a wind tunnel and his skin hadn’t snapped back to normal. He told me that he and his father had made the trip out to Portland University where they had special DNA analyzers. Perhaps the doctors would be able to figure out what was wrong. All that science went way over my head.