Sequel to The Fog of War

Village nurse Walter Kennett is content with his makeshift found-family in tiny Bradfield. However, one midsummer morning a body is found floating in the village duck pond, dead by magical means.

Detective Simon Frost arrives in Bradfield to investigate an inexplicable murder. The evidence seems to point to Lucille Hall-Bridges, who lives with Doctor Sylvia Marks and Walter Kennett at Courtfield House. Simon isn’t happy -- he doesn’t believe Lucy is a murderer, but he’s sure the three of them are hiding something. In the meantime, the draw he feels toward Walter takes him by surprise.

Walter is in a dilemma, concealing Sylvia and Lucy’s relationship and not knowing how much to tell Frost about the paranormal possibilities of the murder. He isn’t interested in going to bed with anyone -- he’s got a complicated life and has to know someone really well before he falls between the sheets. He’s taken aback by his own attraction to Detective Frost and is angry when Frost appears to twist the spark between them to something transactional in nature.

Will Walter be satisfied to stay on the periphery of Lucy and Sylvia’s love affair, a welcome friend but never quite included? Or is it time for him to strike out and embark on a relationship of his own? 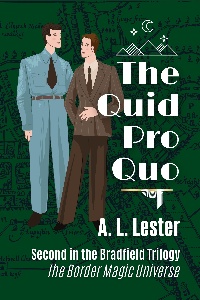 Simon pressed the heel of his hand down onto the place the pain was radiating from. That usually helped. He sometimes wondered if there was anything still left in there. He should probably get it looked at. X-rayed, they called it, didn’t they? The hospital in Taunton had a machine, he knew.

He sighed. “Look, I didn’t just come up to show off my weaknesses to you.”

Kennett made a harrumphing sound that could have been a laugh.

“I came to ask about two things. Her alibi. And the way she describes what happened at the séance.”

“Look,” Kennett drew a breath and said in a firm voice, “she didn’t do it.”

Simon glared up at him, not quite ready to get up off the bench and fall over into the other man’s arms again. “That’s all very well. But you can’t just say that and then tell me you can’t say why you know!”

Kennett screwed up his face. “I just can’t, Mr Frost. And that’s all there is to it.”

Simon managed to stand. For all Kennett was small, he was intimidating. He scowled furiously up at Simon, face creased with anger. There was no trace of the sardonic wit about him now.

“Was she with you that night?” Simon asked quietly. It seemed unlikely, a girl like Miss Hall-Bridges and Kennett, who was a good twenty years older than her if he was a day and a lowly ex-soldier to boot. But he’d seen stranger relationships.

Kennett choked. “Bloody hell, no!” he said, almost with a shudder. “Absolutely definitely the wrong tree, Detective Frost!” There! He did return Simon’s interest, else Simon was a Dutchman.

Simon took another wobbling step forward and Kennett stepped back. Simon finally felt as if he was getting somewhere. There was something there. Why were they all protecting the woman? It was clear she was the best suspect -- on paper, she had reason. But it was also clear that despite the evidence, nobody thought she’d done it. Including Simon.

Not that a lot of other people didn’t have reason to dislike the victim as well by the sound of it. His take-away from speaking to people who knew her painted a picture of the deceased as an entitled, arrogant woman who expected people to jump to her tune. He stopped that train of thought. There was never a reason to kill anyone. Never. Just because most of the people he knew had spent the last few years seeing that as the solution to all their problems didn’t mean it was right.

He drew a breath. “Then point me toward the right tree for goodness sake! If you have evidence that it wasn’t her, you’re morally obliged to let me have it!” he said, finally after a moment of silence.

Kennett shook his head again. “No, Detective Frost. I can’t. It’s not my place.”

Simon eyed him narrowly. He was backed up against the wall of the hallway, calm and not at all intimidated by Simon’s greater height.

“Do you know who killed her?” Simon asked him.

Kennett’s eyes flicked away and back again. He shook his head. “No. I don’t.” He knew something though. He finally sighed and stepped forward, putting him chest to chest with Simon and Simon had no alternative but to step to one side and let him past unless he wanted to make something of it. And he didn’t. He really didn’t. He moved aside.

Simon was left looking after him as he went down the hall to the kitchen, the door propped open against the building heat of the day. He followed him into the room, watching him fill the kettle and put it on, helplessly standing there with his hands fisted in frustration at his sides, hot with irritation in the warmth of the morning and the lit range.

“We’re done here,” Kennett said, sliding the kettle onto the hotplate and turning to face him. “You should leave, before Dr Marks gets home.”

“What, so you can sort out an alibi for Miss Hall-Bridges between you?” Simon said snarkily.

There was quite a long pause and then, from behind him, Dr Marks’ voice, deep and calm and very, very flat said, “No need, Detective Frost. Lucy and I share a bed. She didn’t go anywhere, all night.”

The silence was as absolute as if a shell had gone off and deafened him.