Nate Holliday and his girlfriend, Melanie Sarkosian, are back. This time, they’re fighting crime across the great state of Portland. While earthly law and order is Nate’s main focus—that, and graduating high school—he is soon contacted by a representative, Titanic Man, a member of a crime-fighting group from a parallel Earth.

It seems that trouble is brewing on Earth-Seventeen, a world similar to ours in terms of clothing and design, but with more advanced technology.

It seems that one member of the good guys has been captured by the opposition. Ukiko Monaghan, also known as Dividing Woman, has gone missing, and Nate and Melanie are the only ones capable of bringing her back.

It won’t be easy. Ukiko has fallen in with—or been taken captive by—Alvin ‘Big Boy’ Larpis, the most feared gangster who sends his minions to various Earths in search of materials to build the ultimate weapon.

However, when Alvin sends a hit squad to Nate’s and Melanie’s home world, things get darker, more personal, and Nate has to make a terrible choice of seeking vengeance or upholding the law. 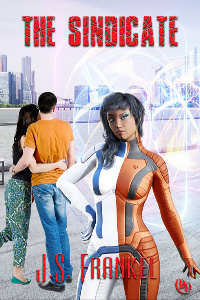 More From The Associate 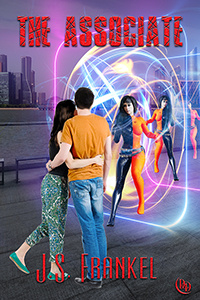 Like life, my senior school year turned out to be different than how I’d imagined it would go.

At first glance, a person would think I was normal, your average, nondescript, middle-class high school senior. I had a caring mother, and a lovely girlfriend, Melanie Sarkosian. Not too much different than anyone else.

As for my classes, I’d studied hard, crammed on every subject, and my grades showed marked improvement. On the surface, things were looking up. University seemed to be a reality, after all. My teachers had given me my props, and the feedback boosted my ego.

Scratch the surface, though, dig a little deeper, and the reality didn’t quite fit the picture of your average high school scholar wannabe…

“Nate, what are you thinking about?”

That question came from Melanie—Mel—my nickname for her. Tall, green-eyed, and lovely, she and I made a somewhat improbable couple. In high school, looks ruled. The good-looking guys went for the prettiest girls and vice-versa. Those who weren’t gifted in the looks department were relegated to a second-tier.

No, that rule hadn’t been written in stone, but I saw it every single day of the week. No one could ever tell me different.

Truth be known, I got by with my average appearance. The mirror told me the story—five-nine, lean, with a mop of dark hair, gray eyes, and a nondescript, hatchet face.

That’s the way it was, and I’d come to terms with it a long time ago. Short of plastic surgery, which wasn’t an option, this was how I would look forever, and then my thoughts turned to lunch.

Mel was in the middle of tearing through a sandwich. Me, the fries I had were soggy, and the salad was tasteless, but I had to have something in my stomach, and…

Her question brought me back to Earth. Daydreaming could really throw a person off-target. “Oh, uh, nothing special.”

Right, lie and hope she’ll believe it. A quick glance around the cafeteria told me the story. People were staring at us. No, not blatantly, but they were staring—and whispering.

Mel stopped eating and gazed around the room. I followed her head movement. Sure enough, those who’d been looking in our direction quickly went back to their meals and their lives.

They hadn’t been staring at Mel, pretty though she was.

They hadn’t been staring at the fall weather through the windows.

No, they’d been staring at my right hand.

It seemed that everyone had a backstory. Mine was that I’d been born without a right hand. Up until three months ago, I’d been forced to use a prosthetic, which only invited more gawking, gaping, and the aforementioned staring.

Then Ukiko Monaghan came along. She went by another name—Dividing Woman. A resident of a parallel Earth—that was a mind-bender in and of itself—she’d come here with her powers and tech, and Mel and I had helped her capture two extremely dangerous criminals.

Ukiko’s powers included exceptional strength as well as the ability to divide her body’s atoms and send copies of herself to other places nearby.

Looks-wise, call her a perfect chimera. The left half of her face was Caucasian, with a bright blue eye and short, spiky black hair.

In sharp contrast, the right side was Asian, along with a brown peeper and silky black tresses. When someone talked about being biracial—her father was Irish and her mother, Japanese—she was the perfect symbol of it.

Her appearance had freaked me out at first, but then it dawned on me that she was genuine. Due to her looks, she’d also suffered, and in a kind and wise manner, she’d helped me to realize that having a handicap was really no handicap at all, not if I let it get to me.

At any rate, in a showdown against the main criminal that she was trying to nab—his name was Astral, and he was a truly bad hombre—she’d given me something called Neural Metal.

Here came another mind-trip—Neural Metal could form itself into any shape or thing, flesh or metal that the wearer could imagine.

Initially, I’d formed a hand, a real, human hand, but quickly found another use for it. My first construct had been a plasma cannon—conceive and achieve—but for the past three months, there hadn’t been any burning need to form any weaponry, unless I went on patrol.

For the time being, I amused myself by forming a flower pot, a replica of the Enterprise, the old space shuttle, and a samurai sword.

Each construct was perfect, conceived by my mind’s eye and my imagination. The first and second-year kids thought it was cool—at least, most of them did. In contrast, the seniors looked upon me with suspicion.

In the past, they’d stared at my prosthetic hand, and the obligatory “Stumpy” or “Captain Hook” comments had come my way.

Now, though, the looks were ones of trepidation. Would I turn it against them? In a way, I couldn’t blame how they thought, and truth be known, I was tempted at times. Payback. Revenge for past slights. Kick their butts.

However, Mel kept me grounded, and I willed my hand to the form of a catcher’s mitt, and then back to normal.

Mel grinned at the sights. “You’re really having fun with that, aren’t you?”

A thoughtful expression replaced her grin. “I’m still getting used to it, to be honest. Not that I’m not happy for you,” she added hastily. “But—”

She bit her lip. “It’s just that, when we were kids, I got used to you having no hand or wearing your prosthetic. Now, you’ve got some kind of alien tech I can’t understand, and…”