If Kaiden can kill his master, he can become a vampire lord in his own right, beholden to no one and free of a thrall’s overpowering bloodlust. Or at least Johann says so. To kill his master, Kaiden will have to learn how to fight against a powerful vampire lord who’s preyed on the countryside of Kaiden’s old home for centuries. The tools of the vampire hunters are weak, and the holy magic of the fallen empire has long faded. But the true problem is Kaiden’s own nature. If a thrall drinks human blood, they become mindless killers. Kaiden can survive on animal blood, but his hunger for humans is always there. And Johann, handsome and kind, is especially tempting.

If Kaiden can resist his own bloodlust, he can live as he chooses and be a beacon of hope for a civilization fallen to vampires. If he fails, he will fall to the fangs of his master or to the stake of the man he’s learning to love. 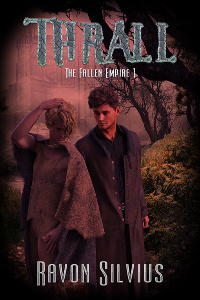 The man my master had commanded us to kill stood on the other side of the river. His wagon creaked as the wooden wheels rolled over the bridge. The man was a mere shadow, even to my enhanced eyesight, silhouetted against the rising moon.

To my left, another of us chattered her teeth, her fangs emerging from her lips. My own stomach growled at the thought of the warm blood that would gush from the man’s veins and feed us. Until now, Master had forbidden us human blood. This would be the ultimate prize. So much better than the deer and other forest creatures I’d been feeding from.

The wagon moved slowly, the horses straining to pull it across the arched bridge. There were two, both with dark-colored coats. One wore a frayed blanket across its back, and the other limped as though its shoes fitted improperly. This man was clearly no wealthy merchant.

One of us hissed, a sibilant, high-pitched sound that only those like us could hear. An answering hiss came from the bushes near the river. Our master had given us the plan, and we would follow it.

The lead horse flicked an ear. The man in the wagon seat shifted his weight.

As soon as the first horse set hoof on the grassy bank, the one to my left attacked. Four others joined her, dark shapes against the light of the moon, swarming toward the animals and their pumping, flowing blood.

I cursed in my mind. I had been turned too recently, and compared to them I was slow. I swallowed saliva, my fangs pricking my lower lip, and leaped forward, dashing through the forest.

Then light flooded the trees.

The four who’d run ahead screamed, their hissing drowned out by the sizzling of bodies exposed to solar light. I ducked behind a tree, screwing my eyes shut. Heat from the light prickled on my skin.

This was no weak man the master had sent us to eat, a gift to us. This was a vampire hunter.

And I was just a thrall.

The light died, fading to a dull orange glow over the horizon. A solar flare would work only once. I knew that from…somewhere. My life before, I supposed.

My muscles tensed when the man spoke—a word to his horses, or perhaps just a comment to himself. The man was mine. The other servants were dead. I would kill the hunter, take all his blood for myself. Me, the newest, weakest servant, able to take human blood. The command tightened my muscles further and pounded in my head. My master’s order—Kill.

I peered out from the edge of the trees, my vision sharpening with bloodlust. The man’s heart beat in a slow, steady rhythm. The light from the wagon made my eyes water, even used up as it was, but it couldn’t hurt me. Not any longer.

The hunter sat in the wagon seat, a weapon of some sort across his lap. He wore tight leather trousers, and my gaze lingered over his muscular thighs. For a moment I imagined taking more than just blood.

The thought died quickly. Since my master had turned me, any lust but that for blood never lasted.

The man had light brown hair, though it appeared red in the fading light of the solar flare. Dark eyes scanned the forest and then settled on me.

I froze, my own thoughts tangled, my body screaming for me to take his blood. His scent—human and sweat mixed with woodsmoke and the bouquet from the village over the river—filled my nostrils.

He raised the weapon. I now saw it was a crossbow outfitted with a wooden stake. His heartbeat was steady. In that moment, I knew I would die.

My master’s orders still screamed in my brain, in my very being—Kill. I was a servant. I obeyed. I was a weak vampire servant, nothing more. But I knew I would die if I attacked.

I didn’t want to die.

His horse snorted. The hunter held his crossbow trained on my heart. The sharp wooden stake that it would fire jutted from the barrel. A servant like me would never survive that.

I could attack. I wanted to leap, to try to sink my teeth into his veins, to obey the orders of the one who’d made me what I was. My teeth ground against each other, and my fangs drew blood from my lower lip.

Instead I turned and fled without truly knowing why. No shot came from the forest.

The unusual silence in the forest as I ran back distracted me from my hunger, and it took me a moment to remember that every other servant was dead. I was truly alone.

I hadn’t known them. It shouldn’t matter. We hadn’t even spoken, only interacting when we fought during our nightly hunts for deer or other animal blood. Without them, there would be more for me. I should be glad.

But happiness, like anything else, faded quickly. I fought to keep running, to ignore the command in my mind that told me to turn back and kill the man I’d been ordered to kill. Doing so would be suicide. He was a hunter. He killed things like me for a living.

It was only when I entered the castle grounds that I wondered if my master would be angry with me.

The gates soared over my head, carvings of wolves seated atop iron bars. The castle blocked the view of the mountain that both overlooked it and kept it hidden from curious onlookers. Gray stone and old rotted wood melded against dead trees.

I took my usual path, through dusty hallways on the fringes of the main keep. Inside, thousands of scents mingled, mold mixing with cold stone and dead leaves and the sharp scents of the other thralls. Their scents would fade. The scent of blood wound through it all, and saliva filled my mouth.