When We Were Young 2

Once a thief, always a thief, and if he can’t win the heart of the boy he loves, he’ll steal it.

Billy Redsky’s made one of his biggest dreams come true, but there’s a problem. Even though the boy he loves is mere footsteps across the hall from his bedroom, they might as well live a country apart because claiming René Oshawee’s heart is more difficult than Billy anticipates.

Much to Billy’s disgust, René can’t accept his true self, so he’s incapable of loving someone else. And all he cares about is living a life the chief and his wife foresee for their youngest son.

If Billy is to finally have what he truly desires, he must stop René from running away from who he really is and face the man in the mirror, or what they share will never blossom into true love.

When We Were Young 2 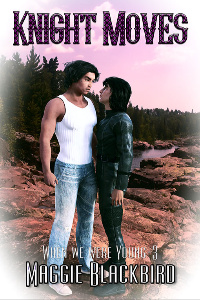 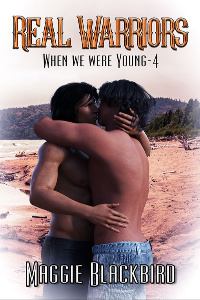 Thank fuck Billy’s foster parents had gone out for dinner. The way they’d hovered over him like a couple of helicopters after bringing him to Castle Oshawee on Sunday morning had been an overcrowding of his landing pad.

Sure, Mr. and Mrs. O were nice, but since René didn’t have to work on Thursday nights, Billy could finally claim some alone time with the very guy who was capable of producing goosebumps on his skin and turning his knees to mush.

Billy threw open the door to his room and poked his head out. The Oshawees’ royal chamber was farther down the hallway, occupying the left wing of the upper floor, and probably then some. Tool’s Third Eye blared from René’s bedroom. A snicker escaped Billy’s mouth. He inched open the closed door.

René sat at his desk, textbooks and binder in front of him. His ever-present can of cream soda waited for a swig.

Not that creeping was required with the level of sound coming from the bookshelf-size stereo, but Billy sneaked up from behind anyway. He wasn’t sure what he preferred better—René tricked out in his rocker apparel or the sweatpants, t-shirt, and boring white socks he dug lounging around in.

René tapped his pen on the textbook and rubbed his brow. His laptop was on. The screensaver was flashing different colors of music notes.

Billy swallowed his laughter and laid his palms over René’s eyes.

René stiffened and jumped. The pen flew from his hand. “Geez,” he said, loud enough to be heard above the song. “You scared the crap outta me.”

Billy lowered the stereo volume and sat his butt on the edge of the desk. “What? You’re not down with surprises?”

Something too familiar Billy had assumed they were now beyond flashed in René’s chocolate-brown eyes. Double great, the guy was a bit ticked.

“Dude, this is my personal space. You can’t be coming in here and invading it. You gotta knock.” A prickle of irritation wormed into René’s voice. He leaned over and snatched up his pen.

The same amount of irritation speckled the back of Billy’s neck. “I thought we were together now?”

“We are.” René reverted to a calm tone, as if hoping to placate Billy. He placed his hand out, palm down, and moved it in a straight line. “But we both need our personal space. Okay? I need my personal space. This is my studying time. Don’t you have homework to do?”

“I already finished it.” Billy folded his arms.

“I’m not done. I still got another half hour to put in. Can you give me thirty minutes?”

Because René wasn’t dishing out his talk-down teacher lecture, Billy nodded. “I thought you’d be game, y’know? We haven’t…we haven’t had any real time together since Saturday night.”

“Maybe I wanted to give you space? You’re in a new foster home. You had a lot to adjust to.”

“Don’t look at me that way.” René shucked his pen on the desk. He laid his palm on Billy’s thigh.

“I don’t understand why I gotta take the bus now.” Billy picked at a loose thread on his jeans.

“Mom and Dad said ’cause we live together. They believe we need our own space.” René spoke quietly. His palm moved on Billy’s thigh in circular motions. “And they want you to be around ki—err, people your own age, Dad said.”

Billy’s chest constricted. “You were about to say kids, huh? We’re sophomores. Not kids. Just ’cause we’re not seniors doesn’t make us a bunch of infants.”

“You’re hardly an infant.” René motioned up and down. “Nooope. Not an infant,” he said under his breath, as if he was about to let out a low whistle of approval.

“I barely see you.” Billy swung his leg back and forth in rhythm with René’s circular caresses that were sheets of satin on his skin. “We’re supposed to be together now.”

“When people are dating, they see each other in their free time. My buddies aren’t with their girlfriends twenty-four-seven. They do school. They do homework. They do rehearsal. They do work. And they also see their girls. Do you get what I mean?”

Billy nodded. True. When he’d been in emergency care at the Atitises, it’d been the same for him and René. “Yeah, I get it.”

“C’mere.” René curled the index finger of his free hand.

A thrill of excitement rode Billy’s spine. He slid off the desk and onto René’s firm thighs that were warm beneath Billy’s butt. It was a little weird sitting on a guy’s lap, especially since he was only an inch shorter, but he wouldn’t complain. He wrapped his arms around René’s shoulders., who gazed up while hugging Billy’s waist.

“Is this what you meant?” Billy snickered.

Billy leaned in. He covered René’s mouth and stole a kiss of cream soda. A big grin stretched across René’s lips. Billy grinned, too. They were only a millimeter apart. He couldn’t resist asking, “Okay, what’s got you smiling?”

“You.” René’s breath of an answer stole itself between Billy’s lips.