Alexis has that special something about her that Seth can’t fathom. His friend Mirabelle’s new employee is even prettier than the merchandise she sells. Too bad she’s distantly polite when he tries talking to her.

Alexis is attracted to Seth, but she’s in hiding from her past and her mistakes. Getting involved with the one person she's attracted to could blow her cover.

When they’re forced to work together, their libidos ignite. Alexis is terrified to open up and give in to her feelings for Seth. If he remembers that night five years ago, he’ll never speak to her again.

It becomes a question of whether Seth will expose her and force her to keep running, or if he'll help her face her past. 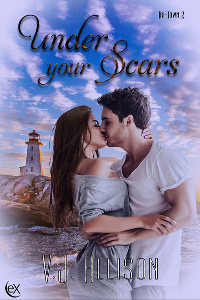 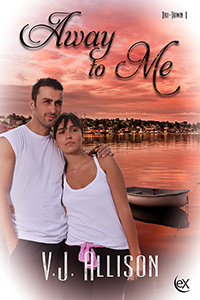 Seth hated taking sleep aids, but he was getting desperate. It had been weeks since he had a decent night’s sleep, and today, he needed to concentrate. They were getting measurements for the wall between Mirabelle's shop and the unit next door to expand her store.

He opened the glass and steel door and realized he didn’t feel any cool air. That’s right. The air conditioning is turned off so it won’t blow around the sawdust. Great. This is going to suck moose balls. Working in humid conditions wasn’t new to him—he worked outside in 30 Celsius plus weather sometimes, with a heat index pushing 40. Working in it when he wasn’t at one hundred percent was going to be horrible.

Alexis Graves, Mirabelle’s newest employee and friend, sat behind the counter. She was staring at some papers in front of her, and her brow was furrowed as she scribbled something down on a yellow notepad.

Seth had never gotten a good look at her despite meeting her once or twice in the last week. It was time to take more than a fleeting glance or two. Her long dark brown braid curled around her neck and dangled between her small breasts. She leaned her chin on her right hand and tapped the pencil on the pad with her left. Her flowing blouse was a soft lavender, and she wore glasses with subtle gold frames. She shook her head, and a soft tinkle emitted from her silver chandelier earrings before she let out a soft sigh and erased something on the page. His gaze travelled down to her left hand. All but the ring finger were decorated in silver rings of various stones.

She pursed her lips, lifted her head, and blinked in surprise when her gaze met his. Alexis’s eyes were a soft brown, the colour of milk chocolate, and they were framed with thick, dark lashes.

Sweat started to form under his arms, his eyes slammed shut, and his mouth went dry as the image of another pair of brown eyes blinking at him overlaid his vision. She looked almost identical to the girl that had been plaguing his dreams. That was why he wasn’t sleeping. Shit. The bitter taste of bile hit his tongue. He felt his body going left, then right.

“Seth? Are you okay?” A cool hand touched his bare forearm. A soft tingle flowed from her fingers into his skin. It felt odd, and although soothing, added a bit of confusion to his already addled brain. His eyes opened. Alexis was staring at him with wide eyes and her lips parted slightly.

“Yeah,” he mumbled and cricked his neck as he moved his gaze from hers. He took a deep calming breath and felt the dizziness start to ease. He could see her staring at him out of the corner of his eye.

“Do you want some water?” she asked. “It’s hot out there, and it’s going to be worse next door.” They were propping open the shop’s main door, but not the door to the next-door unit, due to curious passerby. If they were moving something in or out of the unit—equipment or drywall, for example—the door would be open then. No air circulation meant it was going to be a long, hot day. Fucking meow.

“I’m fine, thanks. I’ll get some later,” he replied, and he tried not to smile. Alexis was normally somewhat prickly. The offer wasn’t like her. Maybe she’s overcome by my charm?

She shrugged and pointed to another stool behind the counter. “Blaine may be talking to Mirabelle for a while, so you may as well sit while you can.” Blaine was Mirabelle’s husband, as well as Seth’s best friend. The men were like brothers, and therefore Mirabelle was like Seth’s sister. She was also overprotective of Seth and would freak out on him if she saw him out of sorts.

Seth shakily sat down next to Alexis with a nod of thanks.

She gave him a small smile in reply. His gaze was drawn to the soft pink fullness of her mouth. She turned her attention back to the pad in front of her and started doodling again.

After several minutes of waiting, he stretched his neck and tried to hold back a yawn. At least I’m productive on the nights I can’t sleep. I hope Mirrie loves the trim I’m designing for the archway. Seth wanted this expansion to be perfect for Mirabelle. She loved the thrill of a sale, purchasing unusual merchandise, and chatting with her customers. He’d never tell her, but he was highly uncomfortable in her shop on his best days. It was filled with too many frilly and glass things for his taste. A yawn escaped his mouth without warning.

Alexis glanced at him and turned back to her doodling.

A few minutes later, he let out another one, this one a bit louder than the last. A trickle of sweat ran down his cheek. He wiped it away. Shit, I’m more tired than I thought. If anyone suggests getting some iced coffee, I’m game.

Alexis stopped doodling, raised her head, and shot him a dirty look before she started drawing again.

He smiled internally. She’s kind of cute. Covering his mouth with his hand, Seth yawned for the third time.

Alexis turned her head and gave him a blank look over the top rims of her glasses.

He sheepishly grinned in reply. There was a weird flutter in his gut when she smiled back.

“You didn’t sleep well last night, did you?” she asked.