When he sees entrepreneur Mitch O'Shea whirling around an empty building, contractor Ben Behr is enchanted. Even though his two brothers are gay, Ben always thought he was a ladies' man until he met Mitch.

Despite his feelings, Ben knows San Francisco native Mitch is totally out of his league. What could Ben possibly do to get out-and-proud Mitch to notice him?

Turns out Mitch is just as attracted to Ben. As they compete in car rallies, camp in the Sierra Nevada foothills, and tour the bars Mitch owns in the city, they realize how stifled they've been their entire lives.

Maybe looking over the fence and jumping it to explore what's on the other side are good ideas. When these two seemingly opposites get together, will Ben and Mitch find out they have the world at their feet and might even have love in their hearts? 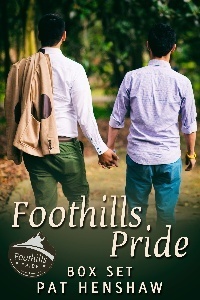 My gut screamed that Con was encroaching, which was really weird. It wasn't like I had any real designs on Mitch. I mean, I'm straight, even though I was between women and didn't really feel like hunting down another one at the moment.

True, none of them made me want to run my hands all over them, though. Which was beside the point, right?

"So you're here for lunch?" Con asked Mitch.

I nodded, but Con didn't acknowledge me.

"Mind if I join you?" he asked, staring at Mitch.

Couldn't he tell he was the third wheel at this party?

I shrugged, and Mitch nodded. I had no clue what the nod meant.

Lorraine, the Bottom's co-owner, latched on to us near the hostess stand, scooped up three menus, and said over her shoulder, "Right this way."

Connor was having lunch with us, then.

"Let me give you a quick overview about the roadhouse, Mitch. Then you'll have some basic info to think about. Okay?" This was a working lunch, right? So I'd best be acting businesslike.

Mitch nodded, and Con, fortunately, figured out what was going on and shut the fuck up.

After we ordered, I walked Mitch through the building's long list of minuses and its one plus -- it was a sturdy old bugger. He told me he'd get back to me about what he was going to do. I had a feeling he'd already decided and was going to call the Realtor to make an offer once we were back in town. You don't often find guys dancing around like crazy idiots who don't already have their minds made up.

As we ate, I watched Mitch and Con chat. I sat there and mentally took notes on how gay guys flirt. If nothing else, I guess I could chalk lunch up as a learning experience.

Right before we got dessert, Mitch asked Con what guys did around here for fun. Nobody mentioned the missing "gay" before the word "guys," but we all knew it was there.

Con told him about Stonewall Saloon with its gay owner and bartender as well as a couple of clubs in a fifty-mile radius.

I thought they'd be off on another of their shared experiences discussions, but Mitch surprised the crap out of me by asking what I did for fun. I'd given up on learning how to flirt with a man and had switched to thinking about Rita and the drive up here, as well as the rest of my stops for the day. I was buried so deep in thought I had to ask him to repeat his question.

Yup, I sounded like I was loose a screw or two.

Mitch smiled as if he found my reaction funny.

"Uh, well, Con already told you about Stonewall. It's not just a gay bar but more of an everybody bar." I scratched my head as I thought. "Well, except women. Not a whole lot of them there. You have to go ..."

Yeah, right. Like Mitch was interested in where to go to pick up girls. Con was staring at me with a puzzled frown.