Just when I thought that going to a new school could be a fresh start for me, I realise I couldn’t have been more wrong.

Not only has my almost-boyfriend dubbed me “The Queen of Freaks,” but it turns out I’m way more powerful than anyone could have ever imagined. That would be all well and good if everything was as it should have been at the Winterwood Academy but what most people don’t know is that there’s danger inside the walls of the Academy far worse than anything we might face outside the Wardings.

Students are dying, and other than my super hot sidekick, I’m the only one who knows that there is a serial killer on the loose.

When my newfound powers attract the attention of one of the most dangerous witches the Winterwood Academy has ever seen, I’m not sure if I’ll be able to make it out alive. 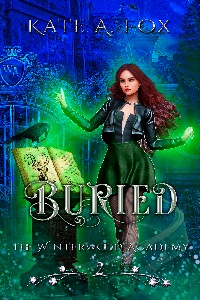 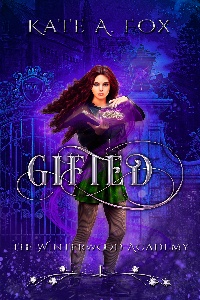 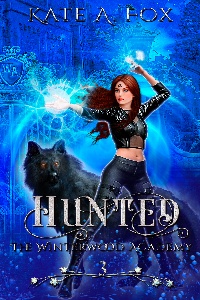 Winterwood Academy Book 3: Hunted
Kate A. Fox
In Shelf
$3.99
All Books In Cart
All Books In Bookshelf
Excerpt

“It happened again.” Keeya gasped. Her thick African hair that had been straightened to within an inch of its life was sticking out at odds and ends all over her head as though she hadn’t bothered to run a brush through it.

Luci was looking just as frantic. Her blue eyes were frantic even behind her thick-rimmed glasses.

I dropped down onto the end of my bed, unable to believe what I had just heard coming from Keeya’s lips.

The images from my dream danced in my mind, and I cringed, wondering whether the two might be connected. My stomach was suddenly aching so badly that I had to place my hands over my abdomen in an attempt to stop it.

“Who?” Zoe asked, her voice small as if she wasn’t entirely sure she wanted to know the answer.

I knew that name. It was the name of one of the Golden Suns -- the Winterwood Academy football team and one of Booth’s teammates.

Suddenly he was all I could think about. Not Cameron but Booth. He must be feeling awful right now.

“How did it happen?” I asked, unable to look at any of them. I was trembling so badly that I moved my hands from my stomach to the edge of the bed, holding on so tightly that my knuckles turned white.

I didn’t really need to ask the question because I already felt like I knew. That was the aching feeling in my gut - the knowledge of what had happened.

“Booth found him,” Keeya answered, and my stomach lurched all over again, “He was his roommate. Apparently, he tried to wake him up but when he rolled him over his face was covered in blood. It was like he bled to death in his sleep.”

Bile rose in the back of my throat, and I placed a hand over my mouth to stop myself from retching.

The other girls looked just as horrified as I felt, but I knew one thing that they didn’t. Tonight, Cameron would be buried in an unmarked grave outside the boundaries of the main cemetery. Why? I didn’t know, but the sensation in my gut told me that I needed to find out.

“I have to go,” I told them as I jumped up from my bed and grabbed a pair of sandals from my closest.

“What? Go where?” Zoe gaped at me as if she was stunned by the fact I could even move after what we had just learned.