The Northwest Maine Pack is settling down now that Diego, the new pack leader, has taken full control. Saoirse presents him with a surprise, making him happier than ever. But making leadership decisions is not always easy.

John struggles with his place in life but knows one thing for sure. Freddie, Saoirse’s bestie, is his mate. Sadly, Freddie doesn’t know about werewolves. John moves to Boston, leaving a gap in pack security. Diego contacts the family of Canadian hunters to see if anyone is willing to fill the gap.

Grant volunteers for the position, since he is haunted by the memory of the black she-wolf he saw on pack grounds. His wolf says she is their mate, but he doesn’t even know what she looks like as a human.

Nathan has been without any real love in his life since his family disowned him years ago. He believes his luck has changed when his wolf meets an unfamiliar she-wolf, and they mate. Unfortunately, the next morning, the woman has no memory of anything they did the night before.

Everyone has waited a long time for what they want most. But the path to true love is rarely an easy one—especially when you are a werewolf. 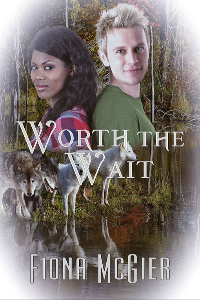 Worth the Wait
Fiona McGier
In Shelf
$4.99 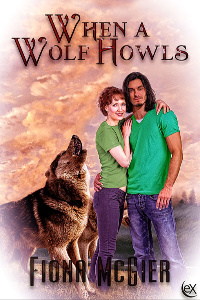 “Why did they ask you?” Grant asked, closely watching his mother, Gertrude, as she sat behind her oak desk.

This office on the first floor of the house he’d grown up in was where she took care of all the family businesses. There were many pictures of him at various ages, along with his siblings. A large portrait sat behind her. It showed her as a young woman on her wedding day, smiling as she held the hand of the young man who was her husband. Grant was always amused by that. Though he was one of the older kids, even he couldn’t remember their father’s hair as blond. It had turned gray at a young age, a silver color that made him look much older than he was until he actually grew older.

His younger brother, Glen, stroked his heavy beard and snorted. “Or maybe he wants one of us around in case there’s any future trouble? Changes in pack leadership can cause lots of unrest until things settle down. And we’ve got a track record of helping them clean up their messes.”

Gertrude pursed her lips in disapproval. “Glen, stop. We’ve enjoyed their hospitality many times when we’ve wanted a change of location for a holiday. They’ve always been glad to host us, either all together, or in smaller groups. Why shouldn’t we be called when they have problems that they know we can take care of for them?”

The door was thrown open, and a force of nature entered. Grant’s oldest sibling, his sister Griselda, swept into the room. “Hi. Sorry I’m late. Couldn’t be helped. What’d I miss?”

Guy, another brother with a beard, snickered. “Take too long kissing goodbye?”

She shot a withering look at their youngest brother. “No, Guy. I was talking with his mother when I got the text from Mom. And I don’t generally kiss his mother at all…if I can help it.”

Smiles traveled around the room. Everyone was used to the bickering that ran through the fabric of their familial relationships.

Gertrude explained. “Seems that the Northern Maine Pack leadership has need of a temporary replacement for one of their ranking members. Remember John, Joe’s second child, and only son? He’s been their second in command, so the head of their security, ever since he got old enough and strong enough to do the job. But he’s taking a leave for a while, and they’ll need someone to replace him.”

“For how long?” Grant asked.

“I don’t know. I don’t think they know, either. I got the impression from Diego that this is kind of sudden, and not something he’s happy about. Like Glen said, pack leadership change can be very unsettling, especially for a pack that’s been under the same leader for damn near sixty years. Having another change so soon is adding another layer of uncertainty. I think he’s trying to minimize the number of people who are aware of what’s been going on within their ranks. So asking us to send someone to help out is a no-brainer, since we’re already known to them.”

“But we’re not very good at following orders,” Griselda pointed out, wearing a grin. “We’re all kind of independent. Our family crest says Doesn’t play well with others.”

Gertrude sighed. “I know. That’s what I told him. But I said I’d check with my brood to see if any of you might be interested. He’s got a couple of packs he’s in contact with that he can ask next. But we were the first ones he called.”

“Well, I’m out,” Griselda said with a toss of her white-blond hair. “I’m not about to leave town and have my man be prey to other females while I’m not here to fend them off.”

“Can’t let up the pressure now, huh, sis? Almost got him ready to propose? Be a shame if all of that work you’ve done on him, softening him up, made him ready to get married, then some other woman was closer than you when he worked up the nerve to propose.”

Guy ducked as the accurately named throw-pillow flew his way.

“I’m not interested,” said Glen. “I’ve got more clients than I can deal with already. I don’t trust any of my partners enough to let them handle the ins and outs of my business.”

Guy added, “And I just got a contract to photograph the effects of climate change on polar bears, so I’m headed up to the great white north in the very near future. Like, in a week or so.”

Gertrude turned to him. “Grant?”

He appeared to be considering his words before speaking.

“I might be interested. I was talking with Nathan, their fourth, over dinner when we were there. He said it was too bad that their leader’s wife was heading out of town, because she and I would have a lot to talk about. Her degree is in biological research, and she’s been trying to isolate and identify possible markers in the blood to see if there’s any way to predict which young ones will discover they’re shifters when their hormones turn on.”

Glen grinned. “I think it’s pretty obvious when they fall on the ground and their bones start cracking and shifting around. Yup, that one’s got a wolf inside trying to get out.”

“But not before that,” Grant stressed. “Lots of people send their kids to the Maine Academy for high school because they don’t know if their kids will present or not…or when. If there was a way to predict it, parents would at least have the peace of mind of knowing their kids were in a safe place for their first time.”