Beautiful and innocent, Natasha Lord is a journalist student who travels to her European homeland to bring down its dictator. But caught for spying, she is given a choice; life in prison, or complete submission to the gorgeous dictator’s powerful sexual appetite. Falling captive to the alpha male’s Roman soldier physique and overwhelming dominance, Natasha must unravel the dictator’s secrets before his will consumes her own. 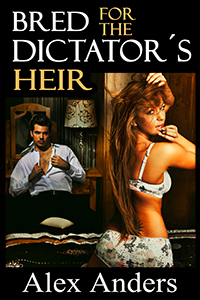 Natasha swallowed through a lump of tears as the women adjusted Natasha’s beautiful nightdress. Looking down, it barely hung lower than her ass. Focusing on the top, she found that the thin straps were attached to lace that lack the silk lining on the rest of the dress. Shifting her body, the soft cloth tickled the tender flesh of her nipple. Feeling exposed, she lifted her arm to cover her breast.

“Do not cover yourself in front of the master,” the handmade ordered in fear.

Natasha lowered her arms and tightened her eyelids as she considered the possible consequences of displeasing her new master. Would she be beaten or worse? What could be worse than that, she considered. She didn’t know. Her tears threatened to spill over onto her cheeks.

Natasha was brought out of her fantasy when a door at the far side of the room opened. Hesitantly, she walked toward it. Even walking slowly she felt the breeze cut through the spaces around her breasts. The feeling would have been titillating if she wasn’t also so terrified.

Through the doorway in the sparsely lit room, she saw a tall, broad shouldered figure sitting comfortably in a high-backed chair. Traditional music played softly in the background, creating any airy feeling about him.

“Come,” she heard the deep baritone voice boom through the room.

Natasha walked toward him feeling her knees shake. Light spilled over him from a nearby lamp. She finally saw his face and the sight of him made her freeze. She had thought the dictator would be an old man, but instead, he couldn't be more than forty. And although intimidating, the man who sat in front of her was chiseled and ruggedly handsome.