When John finds sixty dollars lying on the side of the road, he can’t believe his good fortune. His hopes are dashed, though, when he also spots the wallet. Raised to do the right thing, John drives to the address on the license to return it all. However, when the half-naked, well-built owner, Aaron, answers the door, John discovers it might be his lucky day after all.

John held the black wallet out to Aaron. “I found this on the side of the highway,” he stated.

Aaron’s mouth dropped open. He reached for the wallet with both hands then flipped the cover open. When he saw that it was in fact his, his face brightened. He looked back up at John, flashing a smile that produced adorably charming dimples. They seemed almost out of place on such a solid man. They softened him, made him appear approachable. It was sweet, John decided.

“Thank you! I left it on the hood of my car after I filled it up with gas. I figured it would be long gone by now.” He pulled open the billfold and counted the cash. “It’s all still here.” He gave John a look of admiration.

“I was raised to be honest.” John chuckled, a little awkward with the praise.

Aaron pulled out all three bills and extended them toward John. “Here, take this as a reward. You’ve saved me countless hours of hassle and headache by returning my license, credit cards, health insurance cards, all of it.”

John put his hands up, palms facing outward. “No, no. I’m not going to take your money.” He shook his head. “It’s yours. Keep it.” He smiled. “I just hope that if I ever lose my wallet in the future someone else will be kind enough to return it.”

Aaron tilted his head to the side, appearing to study him. “Are you sure?” He pushed the money at John again.

John instinctively wrapped his hand around Aaron’s and pushed the bills away. His knuckles brushed Aaron’s tanned, hairless chest, and heat flooded through his body. “Yes, I’m sure,” he said in a breathless rush then quickly dropped his hand back to his side. He shouldn’t have touched Aaron. Some people didn’t like that. He laughed nervously. “Besides, I could use the good karma.”

Aaron chuckled, the touch not seeming to bother him at all. “Well, you seem pretty adamant about not taking my money.” He tucked it back into the billfold then looked up. “What’s your name?”

John liked the way Aaron said his name, in his rough, gravelly, tone. He also liked the way Aaron locked eyes with him as one corner of his mouth lifted mischievously. John would have to be blind to miss the signal. Oh yes, the attraction was definitely mutual. Frozen in place by the sexual tension brewing between them, unsure of what he should do or say next, John swore he could hear his own cock pounding out the staccato of his heartbeat in the silence.

As if Aaron actually could hear it, his gaze flashed to John’s crotch then back up again. “Do you want to come in?” He stepped to the side to make room for John to enter. “I can make a pot of coffee.”

John saw the statement for what it was, a promise for possibly more than just coffee. John just needed to say yes.

John wanted to say yes. He wanted this. This moment with a beautiful, kind stranger.

He felt a small twang in his stomach, though, as he remembered that Mark would be expecting him home any moment now.

Aaron stepped back and looked down at the ground, as if sensing John’s hesitation. “I’m sorry,” he said softly. “I didn’t mean to imply…”

“No—” John cut him off. He reached out and touched Aaron’s elbow. “It’s not…look…” Aaron returned his gaze to John’s face. “I do want to come in. I just need to call my brother and tell him I’m going to be late. He’s expecting me. I’m his guardian.”

Aaron’s body visibly relaxed, and he nodded his head. “Sure, of course.” He stepped back and sat on the arm of a nearby couch, giving John some space to call his brother.

Mark answered on the first ring. Instead of lying and telling him that he would be working late, John said that he’d run into a friend and would be spending the evening with him. John figured it was only a half lie. Aaron was, well…friendly, at least. Mark seemed pretty excited that John would be out, since it meant he would have the TV to himself all evening to play videogames with his friends. Sometimes John forgot that Mark was still a normal teenager at heart, even if he’d been through far more than most of his peers. John told his brother he loved him, something they’d started saying more often after they lost their parents, then hit the End button on his phone. He pushed it back into his pocket then placed his entire focus back on Aaron.

John gave Aaron what he hoped was a seductive smile. “Everything is more than okay,” he said, then stepped across the threshold.

Since he’d been the one to ruin the mood, he’d have to be the one to bring it back. He pushed the door shut, flicked the lock, and then turned back toward Aaron, who was still resting on the edge of the couch. John stepped forward between Aaron’s splayed legs, placed his pointer finger beneath Aaron’s chin, then tilted it up so that his full, pouty lips were only inches from John’s. Aaron’s hot breath rushed out in rapid bursts against John’s cheek.

Aaron shook his head. “No,” he responded in a hushed, gravelly tone that sucked John right in. John leaned in the rest of the way and pressed his mouth against Aaron’s. He slipped his tongue out to run it along the crease, inviting Aaron to open up, but before he realized what was happening, he found himself trapped between Aaron’s hard body and the wall, something he was not at all unhappy about. 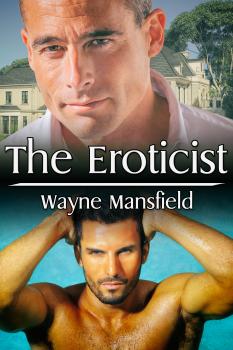