Ton is a troubled young man. Kicked out of home for his sexuality by an abusive father, he works as a lifeguard at a hotel resort.

Jake is a successful writer and has demons of his own. After the break up of his relationship with his long-term partner, life has become a succession of conferences and hotel rooms.

When they meet, two different worlds collide. They spend the last embers of summer in a physical and passionate affair. Can they both find peace and fulfillment, things that neither knew they were looking for? 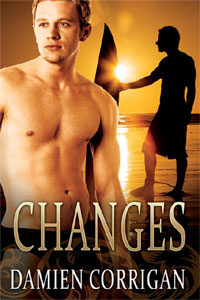 Slowly Ton's head rocked from side to side as he was kissed, his hands slowly caressing the light sweat on Jake's smooth back. His fingers traced the track of his spine. Even here, he found muscle, suppressed power that shivered under his touch. His fingertips felt electric for Jake began to groan quietly under his magical touch.

He felt Jake's hands appear on his chest, for this was all a dream now. Slowly that hand pushed him back until he felt the woollen blanket touch his head and back. Jake hovered above him and once more, those lips were on his.

He could feel Jake's nine-inch cock fully erect now. It slid and slipped on top of his, two glistening members driven by lust. Jake's lips began to suckle his chin and then his Adam's apple. The stubbly chin brushed his chest and Jake's tongue began to lick his nipples.

Jake purred with delight at the effect he was having. Suddenly his tongue darted down the ridge of Ton's tummy and his mouth engulfed that thick cock. His head worked up and down like a piston. Coherent thought left Jake, he wanted his surfer's seed in his mouth.

Suddenly Jake felt two hands on his ears and his head was lifted. He looked along the ridge of that beautiful body and found those two piercing blue eyes looking at him.