Family histories are tricky. Debi knows that. What seems to be the truth isn’t always. And what’s a girl supposed to do when truth and perception collide? When they both center on the one man who’s supposed to be her bitterest enemy? The one man who turns out to be the only man for her? 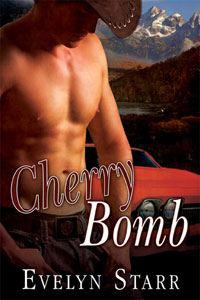 “Cherry Bomb?” she asked, her heart beating suddenly, wildly, inexplicably, in the base of her throat.

“‘68 Chevelle,” Adam replied, pride of ownership mixing in his voice with some other elusive, strange quality she couldn’t identify. “Super Sport. 375 horses.”

All of which meant nothing…next to nothing…to Debi. All of it except the last part. The horsepower part.

“A race car?” she asked, pulling her hand away and taking half a dozen steps backward, instinctively putting distance between herself and the big, incredibly shiny and inherently threatening thing. “One of those old things that pollutes the environment and gets…how the hell many gallons to the mile does this thing get, anyway?”

“It’s called a muscle car,” he corrected. And like his expression, his voice took on an odd aura. “And try to give me some credit, Deb. It may be an old car, but it’s not one of those belchers you see gasping out clouds of blue exhaust. I have more pride than that. I keep it well-tuned. Better tuned even than some of the newer wrecks you see on the road.”

He was proud of his car. That was clear. But he sounded like he wasn’t all that sure of it, either. Like he was…Debi didn’t know. Astonished by it? Amazed by it? A little bit alarmed by it?

“Cherry Bomb.” Like his, Debi’s voice wasn’t sure exactly what it wanted to convey. What it meant to convey. “You…I’m surprised, Adam. Somehow I never thought you were the kind to…”

“I like cars.” A sudden flash, an absolutely unmistakable flash, of proud possessiveness lit his autumn-colored eyes. “Big cars. Powerful ones. I’d go so far as to say I have a certain genetic predisposition for being attracted to big, powerful, outrageous cars like…”

The good Lord knows Mr. Howie knew how to raise seventeen kinds of holy hell in that big old car of his. Helsa’s words came back to Debi. So clear inside Debi’s head that she almost imagined Helsa stood right outside the barn door right then, shouting them at the top of her lungs into the wind and the oncoming storm. Ran around in that thing like there was no tomorrow. And that was followed by a more instant replay of Adam’s recent words. I have a genetic predisposition.

Smiling softly, in a way she’d previously seen him smile only at her, and only in the heat of an incipient moment when they were about to connect ultimately and absolutely, Adam ran a hand along the sweeping curve of the red car’s rear deck in a loving move. A peculiarly sexual, inherently sexual one that made Debi shiver with delight. Or would that be desire?

“And all the time I thought you were the pick-up truck type.”