The world of Naor is a world created by Ulse, the God of brightness, and is ruled by his rights and filled with creatures of his work. And yet it hides darkness—darkness created by Ulse’s brother, Hodgorn, the master of evil. This darkness infects human hearts, drives wars and diseases, and creates terrible beings—atrocities to gods of brightness and an insult to their work. They become rampant like a disease that must be exterminated.

What would you do in the face of an embodied evil? 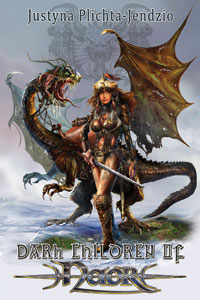 More From Dark Children of Naor

Dark Children of Naor
Justyna Plichta-Jendzio
In Shelf
$5.99
All Books In Cart
All Books In Bookshelf
Excerpt

“Greetings to you, Lady. Who are you?”

She took a deep breath. “They call me Lanes. I am going to the south.”

“What are you doing here, in these harsh lands, alone, in the middle of an ice desert?” Arnoku slowly walked over to her animals without taking his gaze off her.

Tears glistened in her beautiful, compelling eyes. She kept silent for a moment, as if trying to remember what she was doing there at all.

“In late autumn, I went with my husband and brother on the hunt. We were poor. We owned a piece of worthless land. My husband sold the property and for what he got, he bought a sled and five miserable dogs,” she said slowly, with visible effort. “At first, we fared all right, but fortune abandoned us. My husband was a farmer, and not a skillful hunter.”

She stopped to catch her breath and swallowed back her tears. “A few weeks ago, we were attacked by a herd of hungry northern wolves. Only I escaped with my life—because—I hid under the furs, but the beasts took my family.” She stopped to catch her breath again. “Three of my dogs died on the way, and I threw the fur away. I am going to the south.”

Arnoku checked her animals. They didn’t protest—they didn’t appear to have the strength for it. Both dogs bore old, barely healed bite marks. They were too exhausted and had difficulties with the healing process. He made a decision. He unharnessed the depleted animals from the sled and gave them portions of dried fish from his own stock. He joined Lanes’s sled to his, and threw away her box of food, considering it unnecessary ballast. He strapped the two dogs to the back—they were clearly unfit for further work. Before they set off, he gave a piece of dried meat and some vodka to the woman.

“I will give you safe passage and when we arrive at the Castle Yelda, I’d like to invite you for a hot meal.”

She smiled and nodded weakly, accepting the offered drink and food. He ran in silence until twilight, watching the woman the whole time.

When night fell, he pitched a tent on the frozen ocean and they stayed there overnight. Completely exhausted, the woman’s dogs were obedient and took the lowest place in the hierarchy. Arnoku made sure they had their fair share of food. Lanes fell asleep quickly. He couldn’t sleep, for in a tent made for one person, it was a very tight fit.

He got up early the next morning and, after feeding the dogs, got them ready to work. He was unhappy because he had to move slower now, running beside or behind the sleds all day. The journey home would last a few weeks. The unforeseen delay annoyed him.

Late in the afternoon, he saw the Castle Yelda, the closest castle to where he’d found the woman. The ocean ended and they had to get to the castle walls along a steep slope. Arnoku knew where the most suitable accommodations were because he had traveled this way for a few years now. After a great deal of effort, the dogs finally stood exhausted at the top of the slope. The castle was on a small hill nearby.