The world is at war, a war determined to involve Eli, whether he likes it or not. Hitler, his dark army of feral vampires, and even the Devil himself, all conspire against Eli, leaving him no choice but to fight back, risking Malachi’s soul in the process.

Eli is determined to find Ethan’s father, no matter the cost to himself or Malachi, and in a place filled with death and unending cruelty, Eli realizes that some truths should remain buried, and some truths are just too terrible to bear. When the old enemy, demons from Eli’s dark past, find him once more, they reveal a secret so impossible, so terrible, that it pushes Eli to the very edge of his endurance. They took his boyfriend from him once, and the secrets that they reveal about the man he once loved threaten to strip Eli of everything that he holds dear, pushing him to the edge of his sanity.

Eli thought that he had nothing left to lose, but at Welwelsburg Concentration Camp, he realizes that he was very wrong. 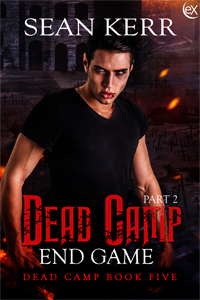 Three prisoners had died in my block that night, two elderly and one young man not old enough to grow pubes. It sickened me. Never, in all my years, had I witnessed such a callous waste of human life. And then to see my fellow prisoners undressing the dead, striping their cold stiff bodies before my unbelieving eyes horrified me even more, and I clung onto Jakob’s broken body for dear life. All around me the clunk of bodies against wood and concrete. My eyes tried not to see and my ears tried not to hear.

A cold clammy hand gently caressed my arm and I nearly shot off my shelf in shock. I didn’t scream. I refused to scream.

“My friend, I’m sorry, my friend, but you must undress him. The rubbish men will be here soon and you must strip him of all clothing before they take him. Please, you must do this for him—they will be less kind than you. Do you understand?”

“His clothes are of value, my friend. They will be re-used for the next intake.”

“And what of his body, what will become of Jakob?”

“You don’t want to know, my friend.” His whispered words made every hair on my body stand on end. A sound outside caused him to return to his unsavoury task with renewed urgency. “Quickly, they are here.”

What followed felt like a dream. I had undressed many a man under many circumstances, but that was a first. Already poor Jakob stiffened, and it pained me to hear and feel his bones crack as I gently prised his pale thin body from the clothes. I whispered my apologies into his unhearing ears and I hated my eyes for glancing across his pale dead flesh.

I had to free them, all of them. That place, that death camp, it had to end.

I lifted his dead naked body into my arms. Emotion, so alien to me, invaded the shrivelled blackness that was my soul, and I knew my eyes betrayed my grief. Emotions made you weak. Emotions made you vulnerable, emotions hurt. And I was hurting. The passing of that human, that mortal man I had known for less than a day, had brought back that affliction from which I had been running from for so very long.

I had only opened my heart to the world again but for the briefest of moments. And already I felt pain.

Gideon hurt me. He made me feel unloved, unwanted, he made me feel ugly. How I would crave for his touch, how desperate I was for his love, to feel the thrill of his fingers upon my bare flesh, to feel his attraction to me, to feel wanted. But all he ever did was refuse me. Every time I tried to touch him, he turned me away. He was not in the mood, he told me to come back later.

I carried that pale body into the grey wet misery of morning. The sun was trying desperately to penetrate the thick layers of brooding clouds that clung stubbornly over the camp, but the sun was losing. Rain dripped incessantly from the skies, melting the remaining snow into a muddy slush. Grey skies, grey ground, grey people. The camp drained the colour out of everything. Welwelsburg was like me, a vampire, sucking the life out of everything it encountered, sucking away hope and dignity, leaving nothing but pale grey husks clinging to the brink of existence.

Two men stood next to a large flatbed trolley. Dead, naked bodies lay crumpled in a pile on top of the trolley, legs and arms sticking out at all angles like some grotesque starfish. I saw children amongst the corpses.

Pale white flickering figures surrounded the trolley. Insubstantial wisps of lives spent before their time. The rubbish men looked at me expectantly but I could not move for the sight of those spectral beings and I clutched Jakob’s dead body tightly to my chest, unwilling to relinquish my charge. If I put him on that trolley then he would be dead, another lump of cold meat on the pile. He deserved more than that.

The ghostly figures turned to look at me, each one knowing me, seeing me, seeing me see them. And they smiled at me. Cold shivering prickles erupted across my skin as their eyes took me in and they were such kind eyes, such trusting eyes. A figure pushed its way between them, its shadowy form brushing gently against the others as it came to stand before me.

Claiming the Hunter
Charlie Richards
In Shelf
$4.99
Tweets by
sirenbookstrand