What should have been the perfect vacation soon became a nightmare. Caitlin Martel made a stop before meeting her family at Miami International Airport. A cryptic message waited for her. She dismissed the threat and assumed it was directed toward the brilliant scientist that she recently hired. Caitlin has no idea that a forgotten secret was about to explode and put her life in jeopardy.

When Caitlin and her family arrive on the Caribbean Island of St. Kitts, they find their dream home vandalized. In the kitchen, another message has been left in blood, leaving no doubt that Caitlin personally is the target.

In a flashback Caitlin recalls the secret that her father, Jack Spencer, revealed to her sixteen years ago. He didn’t tell her everything. Will Jack be able to confront the truth and reconstruct the past in time to save his daughter?

Caitlin’s husband Scott, FBI Assistant Director, also believes the threats are related to Caitlin’s professional life. Once Caitlin points out the significance of what was left in their home, Scott unofficially brings his top FBI agent, Tomas Medina, to St. Kitts.

When Tomas arrives, his status is quickly upgraded and the investigation becomes official. The third threat creates a direct link to multi-billionaire Lukas Bucklin. The suspense escalates through twists, turns, and family secrets yet to be revealed. A powerful climax unveils an unlikely alliance between two deadly and dangerous enemies. 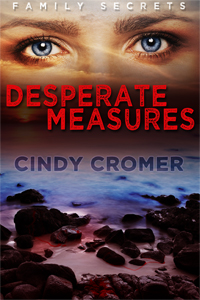 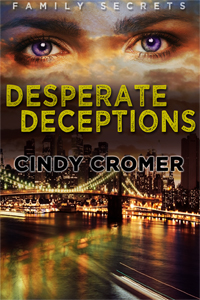 “Forty-five minutes, an hour tops and I’ll meet you right here. Go get a cup of coffee. A quick breakfast.” Caitlin Spencer Martel tossed a ten-dollar bill at the driver and then added, “That’s not your tip. I’ll take care of you later.”

“Yes, ma’am.” Chuck nodded, glancing at his watch and a frown formed on his face.

Caitlin understood the signal. They didn’t have much time because she had a plane to catch. He had the responsibility to ensure she arrived at Miami International Airport two hours early.

Chuck took his job seriously and worry lines creased his forehead. Caitlin relied on his dependability and always requested him when she needed a driver. She reassured him, “Don’t worry, I won’t get sidetracked. We’ll have plenty of time to get to the airport for my flight.” She turned and jogged toward the back of the building.

By the time she reached the door marked ‘CSM Technologies Authorized Personnel Only’ beads of moisture trickled from her hairline and ran down her face. The pink silk tank top clung to her upper torso, a damp circle formed on the back of the formerly pristine shirt. The physical exertion attributed to the jaunt across the parking lot had nothing to do with Caitlin’s sudden haggard appearance. At 7:00 a.m. in July, the Florida air already weighed heavy and thick with humidity. She felt sticky from the warm dampness.

Caitlin inserted the key card and entered. She experienced a startling climate change, from steam bath to freezer instantaneously. This was the coldest part of the building, necessary conditions for the laboratory specimens and operation of high tech equipment. She looked left then right. Good. Empty hallways and offices. She had to be quick and couldn’t dally with problems. She shouldn’t be here now and she certainly shouldn’t have been on the premises last night. Guilt washed over her. She pushed the feeling aside and let anger take over.

Forty-five minutes later, Caitlin scrawled her signature on the last document that needed her personal attention. The signature was almost illegible; the caption on the letterhead, below the chicken scratch was not. It read Caitlin Spencer Martel, CEO CSM Technologies, the company title, a testament to her presence in her office on this day. Dedicated? Yes. Thorough? Yes. Easily fooled? Maybe, but not when it concerned contracts and business. Conscience clear, Caitlin stood and placed the paperwork in the to-be- mailed pile. Chuck would be happy the forty-five minutes to an hour hadn’t turn into an hour and a half as it usually did. The light rapping on the office door might change that.

Having known the woman for most of her career, Caitlin could see a problem had occurred. She mentally ticked off the list of possibilities; A Research and Development set back, delay in the Engineering Department, more contractual issues. The worst case scenario: a laboratory accident resulting in an injury. She broke the silence at last. “What is it?”

Victoria replied, “Mrs. Martel, this was in the mailbox this morning when I came in. It must’ve been in Saturday’s delivery. I shouldn’t have opened it but anything not marked personal and confidential I try to sort. You have enough on your plate with starting up this company and the planned expansion.”

“Damn! I was here all weekend. I should’ve brought the mail in. It can’t be that bad, unless it’s about one of the investors pulling out.” Caitlin forced a half-hearted grin. She sensed something bad, really bad, was about to happen. After a moment of hesitation, she reached for the envelope. The contents confirmed her fears. She attempted to project a calm demeanor and mask her fright. She was unsuccessful.

Victoria must have noticed Caitlin’s reaction. She cautiously asked, “Are you okay? I didn’t want to ruin your time away with your family but was sure you’d want to see it.”

Caitlin flicked her hand nonchalantly. “It’s nothing. I’m sure this note is from some nut case who feels the need to express his opinion about my decision to hire Dr. Tessell. Chuck is waiting. If anything else comes up during the next three weeks, please e-mail me or call my cell-phone. I’ll be available twenty-four/seven.”

“Yes, I know that. You’ll be checking messages and e-mail daily, right? Relax and enjoy yourself. Don’t worry about anything here. Everything will run smoothly. Spend some quality time with your family. You need this vacation.”

“Will do, Victoria. I’ll call in daily.”