Kyra Morgan always wanted to live in the past, and now she's found a way to do just that. Whether she likes it or not. Wrapping herself in black velvet under the sweltering Southern sun, Kyra spends her summers working at the Tudor Rose Renaissance Festival, as a Lady in an imaginary royal court. She hasn't had much luck with men either and has little interest in handing over her heart again, so she immerses herself in her scholarship and the local faire where she can escape into the past and ignore the problems of the present day.

Rafe Harrison is hard to ignore, however. Handsome, confident, and boorish, he is beloved by most everyone at the faire, particularly the women. Even Kyra's best friend is quick to champion him, much to Kyra's dismay. Kyra knows little about Rafe, but wisely despises his bravado, his appeal, and his slipshod reenactment methods. And when Rafe is implicated in her best friend's riding accident, she cannot forgive him for his neglect or herself for the unwelcomed sensations he stirs within her. But after tampering with a gypsy potion, Kyra suddenly finds herself and Rafe transported back to sixteenth-century England, and it is nothing like the 1500's back home. It is a dangerous time of court intrigue, French wars, and Scottish insurrection. Kyra soon finds that she must learn to trust the courage and heart of the man she reviles if they are to survive. And, more importantly, she must learn to trust her own heart as she fights for both her own and Rafe's survival upon one of the bloodiest battlefields in England—Flodden. 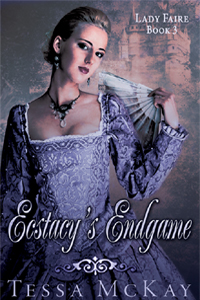 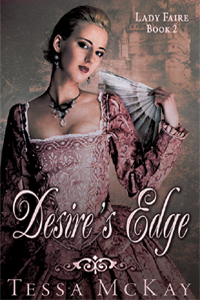 "I'm not here to argue with you, Rafe," Kyra said evenly, looking up into his face. The white thread of the scar still ran down one cheek, but there looked to be a few added abrasions and a noticeable, atrous bruise on his forehead, most of it hidden by the ragged strands of black hair that fell across his brow as he gazed down on her. His green-eyed gaze burned into her, but his brows were knit in pain. His jaw was tight and he was indeed genuinely angry, but in his voice, somewhere beyond the accusation, was a pleading, a need to understand. She found herself wanting to push the hair from his face, touch her lips to the contusions and somehow ease his mind.

"Then what are you here for?" Rafe prompted brusquely.

Kyra cocked her head. "To get you out of this." She nodded toward the camp. "To get us both out of all of this mess that I seem to have gotten us into." Kyra felt his grip on her shoulders relax a bit. Rafe stared at her vacantly for a moment, then gave a curt laugh.

"You are going to rescue me now, are you?" he asked bitterly. "The way you did at Mireflore?"

"Rafe, no, please stop. I thought I was doing the right thing! I did not know--"

"No, you stop!" Rafe's voice lowered and his eyes narrowed dangerously. "Is that the deal you were making in James' tent? What's one more king's bed after all?"

Kyra's face flushed and she attempted to break away once again. "That's enough!" she cried, trying to shove his shoulder aside, only to find herself caught and bound tightly in his arms, caught up breathlessly against his pounding chest.

She didn't fight him, unsure of what he wanted, what he needed from her. Kyra closed her eyes and pressed her back against the solidity of the Yew for support as his hands slid around her waist and moved freely across her body. She inhaled sharply as he grasped her hips and set about molding her body to his, his sinewy thigh sliding across hers, his hard stomach pressing against her quavering belly. His body burned through her clothing, hot and eager, as his mouth covered hers. There was no escape, but she couldn't have wished for a better release as she eagerly accepted his probing tongue, answering his unspoken question—she was still his.