Racine (Racy) Palmer’s life was just about as perfect a life as any diva could ever wish for, that is, until she became the obsession of a vampire named Jude. Jude was born of the bloodline of Judas Iscariot and part of a vampire clan known as the Kindred.

Racine’s best friend, Cynthia, was also coveted by Jude. In his quest to create a vampire nation, Jude has plans to turn these two into she-vamps for his own personal pleasures, and will stop at nothing to acquire them.

Stephen, Jude’s half-brother also belongs to a vampire family know as Iscariots who are the mortal enemies of Kindred. The Iscariots have vowed to help protect mortals while they feed on the blood of the Kindred. Stephen came over from the old country to find his brother and slay him, but in the process becomes romantically involved with Racy, in an impossible relationship.

Jude’s brutal pursuit for power to rule the living dead brings many to a tragic end. 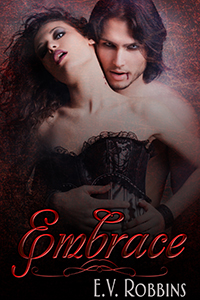 “You will be mine, one way or the other, you can embrace all that I have to offer you. Just surrender yourself to me and everything you’ve ever wanted can be yours, or I will take you by force. I will own your soul—it doesn’t matter to me. The choice is yours,” said Jude as he held Racy in a strangle hold with an iron grip of his hands from behind her.

He tilted his head forward even closer to her shoulder, savoring the moment. His nostrils flared as he smelled her skin. Her perfume, while intoxicating as it was, he did not smell the one thing he had hoped for, the smell of fear... but no matter... she would soon be his!

She felt his lips on her neck as they parted, then the sharpness of his teeth, he seemed to hesitate. Then, with a pass of his tongue, he moistened her skin and opened his mouth wide to sink his teeth into her flesh. Racy knew the moment had come, she must kill him. It was either do that or die trying.

“In your dreams,” she stated in a weak, raspy, air-starved voice, “in your dreams!” She ran her stiletto heel down his shin and spiked it firmly into his foot, then quickly struck him in the groin with the back of her heel, followed by an elbow punch to the upper abdomen.

The blow caused him to swoon backward just a few steps, just enough to make him loosen his grip, barely enough, but Racy was able to slip her head out of his grasp as she spun around to face her assailant.

He guffawed a sinister laugh. “No greater love than this, to lay down one’s life for one’s friend, or something like that. Is that what you think you’re doing? She’s mine! She hasn’t turned yet, but soon, very soon. Then all that you’ve done will have been for naught. And then I will have you as well.”

Again, he let out his taunting laugh as he paced from side-to-side like a tiger waiting for the right moment to pounce on its prey. Racy knew that if she failed to kill him, not only would he kill her, but her friend would surely be lost as well. She had to destroy him, there was no other option!

Leaping forward, Jude slammed Racy back into the outside wall of the building, momentarily knocking the breath out of her. He snarled and opened his mouth wide to expose his razor sharp teeth as he let out a banshee like scream while he slowly leaned toward her. She looked into his dark hallow eyes that glistened like black onyx. He stared back into hers but this time, she reflected no fear. Instead, she allowed only the rage inside her soul to show.

“I have something that I’ve been meaning to return to you,” she said, as she quickly reached under the edge of her skirt withdrawing the silver bladed dagger from her garter, the one she had taken from his desk that auspicious night. As she pushed forward with the full weight of her body, she drove the entire length of the dagger into his chest.

“Aahh!” he screamed with a piercing shrill that seemed to go on forever. This time, it was not the scream of an aggressor attempting to strike terror into the heart of his prey, but a shriek of one receiving a mortal blow. It resonated with the sound of real pain, of real fear, of real terror.

The blade reached the depths of his depraved black heart. A look of shock now swelled up in his eyes as a wave of pain came over his face. His sinister countenance turned pale with fear as Racy twisted and turned the blade to drive it in even deeper. His blood flowed out over her hand.

“I love the smell of fear,” said Racy through clenched teeth, as she stood face-to-face with the one she had feared for so long. His head fell on her shoulder, his body slid down hers, pulling her to the ground.

How did it ever come to this?

“Stephen!” Racy cried out, her frail voice echoing through the huge smoke filled grain silo. Covered in sweat and blood, smeared with soot and dirt from head to toe, slowly she stood. Briefly she looked down at the lifeless body of the she-vamp that lay between her feet, a stake protruded out of her chest through her left breast, dark crimson blood, almost black, oozed out around the impaled object.

She sobbed as her eyes burned from the salty sweat of her brow as her tears streamed down her face. She stepped aside and staggered backward as she viewed what she had just done.

“Stephen! Please! Where are you?” But there was no answer, only the echo of her voice as it reverberated off the cold cement walls. Had he been slain like the others? Was he wounded and bleeding somewhere, unable to answer? She wasn’t seeing much between the darkness of night and the smoke that bellowed out of the building.

In the distance came the wailing of sirens that were swiftly approaching. The police would be there soon. What should I tell them? What would they believe? Aimlessly she stumbled about looking for Stephen, but he was gone...

This is how it all began...