Dimitri Alexios lives alone in his San Francisco mansion, if one could call loathing what he is and hating his maker living. Until he beholds the mortal woman who appears on his doorstep. Her gentleness brings light to his darkness, and her innocence calls to him. Yet she knows nothing of his world, or the dangerous predator that constantly rages within him.

Museum curator Cassie Stephens, sent to catalog antiques at the Alexios estate, is surprised to discover Dimitri is anything but the old man she expected. He’s handsome and darkly mysterious, not the sort who’s usually attracted to her girl-next-door looks. Yet she’s ensnared by his irresistible charm.

Cassie’s passion has touched a heart he thought no longer capable of love. Now he must turn his strength to a deadly task: a battle to save the woman he loves from the maker who would love nothing more than to rip her away from him… 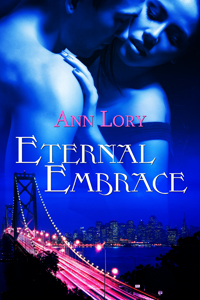 Cassie walked through the maze of people who laughed and talked boisterously. As she passed, all turned and bowed. “My lady,” they said. She nodded, and proceeded.

Coming to a mirror, she paused and studied her reflection. She wore the same dark blue satin dress with black lace over a billowing skirt that she had worn to the party with Kelly—but now there were diamonds around her neck and diamond ear bobs in her earlobes. She looked every bit the high aristocratic lady.

A hand touched her shoulder; she knew it was Dimitri, but his reflection didn’t show in the mirror. She spun to face him, heart pounding.

“Dance, my lady?” he whispered. He cocked his head, his dark gaze traveling over her. “You look beautiful.”

“Thank you,” she replied breathlessly, forcing her fear to recede. He swung her into his arms as the music began and she soon caught up in the swirl of dancers. He waltzed her around the dance floor, his steps quick and sure. She focused on him, only him.

He was the most handsome man there. His black hair hung long and straight to his shoulders, his black coat and pants fit snugly over his sinewy form. His dark gaze sensual as it swept over her face. Was that longing in his eyes?

Surely, there was in hers. I want to share eternity with this man, she thought.

His lips parted, and she watched, horrified as fangs descended. She gasped and tried to scramble away, but his arm locked around her waist, imprisoning her against him. She looked around wildly for help, but everyone continued to dance, oblivious to the two of them as the throng of people danced faster and faster, until everything blurred. She attempted to call out, but her voice trapped in her throat.

Her eyes widened as he lower his mouth to her neck, his lips scorching her skin where he placed a light kiss. Then there was a brief moment of pain as his fangs pierced her flesh. Visions of blood, so much blood, filled her as he drank. Distantly she heard pleas for mercy, cries of distress.

Locked In (MMF)
Elizabeth Raines
In Shelf
$1.99
Tweets by
sirenbookstrand