Love doesn't make the flowers smell sweeter, Love wakes you up to the world around you. Love won't make you flawless, but Love will take away the fear that holds you back. Love isn't the destination, Love is journey you take with the one person who cares about you most.

Twenty years after promising to love each other "Eternally and Evermore", teenage sweethearts, Amy and Will, are reunited to discover their love burns as strongly as it ever did. But while Will is a successful lawyer, Amy has walked a tougher path. What secrets does she harbor? What ghosts litter her past? And what horrors will they have to endure before they can finally be together "Eternally and Evermore." 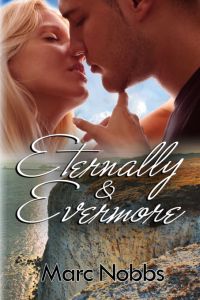 “Better not to ask than get embarrassed by the knock back.”

Life in the Sixth Form came with privileges at King George’s. For example, students no longer had to wear the awful grey, white and burgundy uniform—although they were still expected to dress smartly. Self-study periods, or ‘frees’ as the students called them, were another privilege. But for those who’d chosen to continue their education beyond the legally mandated age of sixteen, those privileges were coupled with responsibilities. The headmaster called his Sixth Form students The Cream of the Crop. And he expected them, as the oldest students in the school, to behave like young adults, dress like young professionals and do their best to look after, and set an example for, the rest of the student body.

And that was the reason that Will Brown and Bobby Edwards found themselves alone in the entrance foyer on a bleak winter morning. Moments earlier it had been crowded with pupils rushing to their classes following mid-morning break. It had been their turn to supervise the traffic and try to keep the youngest children from being trampled. With break, and the rush, over, they stood and examined The Wonderwall before returning to the common room for their ‘free’.

“How many names do you recognise?” Will asked.

“One or two. Not many,” replied Bobby.

The varnished oak board bore the names of some of the school’s former students. It had been erected during the Christmas holiday and took pride of place in the foyer, along with some of the current students’ artwork.

“What the hell is the point of this thing anyway?” Bobby said.

“The head says it’s supposed to inspire us by giving us an example to follow.”

“Yeah, okay, but it would help if we knew who any of these plebs were, wouldn’t it? Or what they’ve done that’s so brilliant.”

“Wasn’t Gareth Jenkins school football captain a couple of years ago?” Will said.

“Yeah, he was. Come to think of it, he’s on the books at Walminster City apparently. But he’s not broken through into the first team yet. I don’t reckon he ever will either. He wasn’t that great.”

Bobby nodded. “He plays for cricket for Westmouthshire. He got a call-up to the England B squad last month.”

Will gave him a confused look.

Bobby shrugged. “He was on Westmouthshire Tonight the other day. I remember because it was the same day the head was on after that fire by the bike sheds.”

The two boys continued to scan for names they recognized.

Will shook his head. “See any more?”

“Sally Whitehouse,” Bobby said. “I think she’s on the stage in the West End. In the chorus line of some musical.”

“Hardly a set of shining examples, is it? A couple of low rate sportsmen and a West End wannabe.”

“You can’t tell me you weren’t disappointed when you failed the entrance exam for the grammar school.”

“You didn’t? You never told me that. What are you doing here then?”

“I didn’t fail it, because I never took it.”

“My granddad had just died and my Mom was in the hospital. I guess it got overlooked.”

“Overlooked? For fuck’s sake, Will. That oversight has cost you seven years in this dump. Brain as big as yours, you should have walked it.”

“Maybe. But is it really worth getting the bus out to Westmouth every day? Besides, this place has its compensations.”

Will didn’t answer. “Hey, there is one famous name missing from here.”

“Phil Jeavons. He’s hardly a good role model, though. He robbed Barclays and got sent down for ten years.”

“Still famous though. Should we carve his name on? I’ve got my Swiss Army Knife in my locker.”

One of their classmates approached and they nodded to him and grunted a greeting.

“You two are examining The Wonderwall, I see,” Ray said.

“Stupid name for it,” Will said. “Wonderwall. I ask you. What’s it supposed to mean?”

“You would,” said Bobby.

Ray ignored him. “Do you two know what?”

“Someday, I’m going to get my name on The Wonderwall.”

Ray huffed. “No. Someday, I’ll be a millionaire.” He wagged his finger at them. “You’ll see. I’ll be one of the most famous businessmen in the country. And in twenty years they’ll be begging me to come back here as a shining example of school success. And do you know what I’ll tell them?”

Will sighed. He’d heard this from Ray before. “What?”

“I’ll tell them to stick it. I’ll be a success despite this dump, not because of it.”

“That’s right. And I’ll tell you something else, when I’m rich, there’s no way that Amy won’t go out with me.”

“Oh, come on, Ray!” Will shook his head. “How many times have you asked Amy out?”

“I don’t know, five or six. But at least I have asked her out. You haven’t got the brass bollocks to do it. Everyone knows you fancy her, you know.”

“I haven’t asked her because I know what she’d say. Why would anyone from the posh estate go out with one of us lot, huh? Better not to ask than get embarrassed by the knock back.”

“It wouldn’t be embarrassing,” Ray said.

“Not for you, maybe. Besides, she’s a mate. It’d only make things awkward if I asked her out and she said no.”

Two more of their peers passed through the reception. John Nugent and James Asbury appeared to be heading for the library, but Will suspected they weren’t planning to study.

“Hey,” Nugent called. “What you three tossers doing? Dreaming about being sad enough for the Wall of Shit?”

“Why don’t you go fuck yourself, twatface.”

“He started it.” Will pointed at Nugent.

“I don’t care who started it. I’ll thank you both to clean up your filthy mouths. Detention. Both of you. I’ll let you know when. Now, don’t you have somewhere to be, Mr Nugent?”

Will waited until Nugent and Mrs Riley had left and said, “That fucking bastard.”

“Mr Thompson wants to see you.”

“What does he want?”

“It’s probably the same have you thought about your options when you leave school talk that I had,” said Bobby, rolling his eyes. “I know it’s ages away, but he wants as many people to apply to university as possible. I think he thinks he’ll get paid more if we do. Fucking idiot.”

“Are you going to apply?” Will asked.

“No point,” said Bobby. “Unlike you, the only universities that my shitty grades will get me in are, well, shit. I’d rather go out into the real world and start earning than spend another three years doing homework and racking up huge debts.”

Ray nodded. “He’s waiting for you. He knows you’ve got a free period, so you’ve got no excuse.”

“Yeah, see you. I’ll be in the library. And remember, don’t let the bastard talk you into shit you don’t want to do.”

Will didn’t hurry on his way to Thompson’s office, which was on the first floor next to the sixth-form common room. He knocked even though the door was open. “You wanted to see me, sir?”

The Head of Sixth-Form looked up from his paperwork and smiled. “Will, yes. Come in and take a seat, my boy. Oh, and shut the door.”

Will closed the door behind him and sat down. Thompson reached for some papers at the back of his desk. He searched through them and picked one out. Will guessed it must be his last set of school reports. Thompson read the paper silently and then looked up.

“Splendid report again, Will. Splendid. I see that that your subject teachers have all predicted straight ‘A’s for you this summer. Quite a feat.”

Will tried, and failed, to hide his embarrassment. “There’s a long time between now and then, sir.”

“Not as long as you might think. Not as long at all. Now, have you thought about what you plan to do afterwards?”

“I was thinking of applying to university, sir. I’ve always wanted to be a lawyer.”

“I’m not really interested in the money, sir. I just want to help people who can’t help themselves.”

“Very noble. Although a whacking great salary can’t hurt, can it?” He roared with laughter.

“Of course, you understand that choosing such a career makes your choice of university all the more important? Law firms tend to place great stock in the heritage universities, you know.” Thompson put the paper down and leant forward. “With these grades you’d stand a good chance of getting a place at one of the Oxford or Cambridge colleges. There’d be an interview, of course, but you’d have no trouble with that, I’m sure.”

“Traditionally, I suppose they do have that image. But these days they’re expected to take their fair share of state school candidates too. Times change and, like it or not, the Oxbridge establishment has to change with them.”

“Well, it’s your choice, of course. But think about it, okay? You’re coming on the trip to Westmouth University, aren’t you?”

Will left the office and looked in on the common room. The only occupants were Amy Robinson and Lizzie Archer who were standing at the vending machines a few feet from the door.

“I don’t care,” replied Lizzie. “Just pick one and let’s go. We’re already late. Old man Hubbard will do his nut. I could kill that bloody Ray Turner. Why hasn’t he got the message that you don’t want to go out with him.”

“Beats me. You think that the phrase, ‘not if you had a million pounds’ would be clear enough, but no.”

Lizzie laughed. “I can’t believe his reply. The cheek of the boy.”

They turned around at Will’s words and noticed him for the first time. Amy beamed. “Oh, hi, William. I thought you’d be in the library, as usual.”

“Just had a meeting with the boss-man.”

“About what you plan to do next year?” Lizzie asked.

Will nodded. “That’s the one.”

“Bet that was a waste of time,” said Amy. “With your grades you’ll be off to a top university, while the rest of us will have to make do with what we’re offered.”

“I don’t know where I’m going yet. I haven’t really thought about it. Anyway, what did Ray say? He was boasting earlier that you’d have to go out with him if he was a rich businessman. I bet you took the wind right out of his sails.”

“Not really,” said Amy. “I said not if he had a million pounds and he said what about two million, or three. He just doesn’t get it.”

Will half-smirked. “What did you say to that?”

“How many times is that he’s asked you out now?”

“Eight, I think, if you count that time at the Christmas Party when he got drunk and asked almost everybody out.”

“Lucky you,” said Will. All three of them laughed.

“Sorry, William, but we have to go,” said Amy. “We’re already late. See you lunchtime? Save us both a seat?”