Gabrielle and the Devil

Gabrielle Deangelo is troubled – by an apocalyptic dream in which she resists sexual submission to the Devil himself. Her friend Pandora sees a need in the dream for Gabrielle to abandon her puritan morals if only for one night. Together the girls attend a Halloween costume party with a reputation for crazed decadence. There the angel Gabrielle will encounter a suave horned seducer – red-skinned, with a nice line in chat. Is his presence there a set-up arranged by Pandora? Or is Gabrielle to be ensnared by something darker, something which will confront her with her deepest most infernal desires? 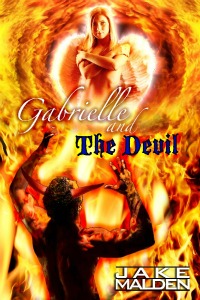 Gabrielle and the Devil

Gabrielle laughed suddenly, at his playfully wicked words, at the preposterousness of her situation, at bloody Pandora for landing her in all this. And then she stopped, as he raised a hand to his throat and in a swift move ripped his bowtie undone. Tentatively, as though led by some will other than her own, she undid the jacket and reaching way up, slid it away from his massively broad shoulders. She went to catch it as it slipped, but he shrugged it free and unconcernedly let it fall to the grass. She began to unbutton his shirt, working all the way down without parting the pleated white, before plucking uncertainly at his cummerbund. He aided her, reaching behind to untie it, so that it pulled away in her hands. Then, her heart racing, she tugged the shirt tails free of his trousers, struggling mightily to ignore what she knew was a colossal protrusion from within the dark fabric.

In hesitant awe she parted the shirt, uncovering the thick, arched trapezius muscles of his shoulders, the massive expanse of his bulged pectorals, the ribbed hardness of his stomach - all smooth as basalt, all, she knew even in the gloom, the same dark shade of red as his face. She let out a fearfully ecstatic little moan, as she reached out with her fingertips and ran them lightly over the hard, male surface.

Washed Up
Viola Grace
In Shelf
$1.59
Tweets by
sirenbookstrand