Getting Her Ladder in a Twist

Disgraced ex-lawyer and dumpee of a shallow boyfriend, Clara tentatively starts a new job and plummets into a dangerous attraction. Her new boss is Melinda Newland, Chief Political Analyst and Editor at a prestigious e-news company and elitist socialite. She demands the highest level of professional and ethical conduct, being a journalist fervent in bringing down the corrupt and unethical.

But Clara is being plagued by obsessive fantasies to be kept secret at all costs, lest it tarnish the impeccably straight image of her boss and the company. In her struggle to push aside her dark desires, she also realizes that Melinda is behaving more and more enigmatically toward her. 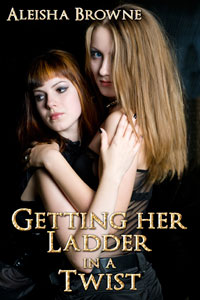 Getting Her Ladder in a Twist

Inside Melinda's office, I pulled a spare chair to the space she had indicated, between her desk and a giant pot of a tall gardenia magnifica in full creamy-flowered bloom. I sat down on the chair and quickly began to set up the laptop. Glancing up, I saw Melinda stretching away from me over her desk to turn the telephone to speaker mode. Unconsciously, my eyes followed the line of her back to the curve of her tidy derriere--how often have films featured those gratuitous shots of this admirable part of the female anatomy and how often did women compare these ideal pieces to their own?

I could not help but admire my boss' cute ass, cupped by those snugly fitting pants. Feeling embarrassed at this, I cast my eyes downward. As Melinda was leaning forward, the hem of her left pant leg had lifted to give a sneak glimpse at a petite, black tattoo on her ankle. It was a stylised symbol of what I made out to be some kind of sinuous animal. Perhaps a snake with a rattle as big as its head or perhaps be a double-headed serpent?

As she made to sit down, the hem of her pant leg re-covered the tattoo and I hurriedly looked up to meet her glance as someone on the other end spoke through the phone.

Come and Get Me
Zenina Masters
In Shelf
$2.99
Tweets by
sirenbookstrand