Come and Get Me

Kalli Next runs Hell, a bar and cafe on a new colony jungle world. One night she uses her psi talents to stop a bar fight and the next thing she knows, she is staring at three new lawmen that she knows in her bones. Hers. When she is released the next morning, she has only one comment to make to the stunned men who know that she is their fourth--come and get me.

Come and Get Me

Heat Rating: Sizzling
Word Count: 17,750
14 Ratings (4.1)
Menage a Trois/Quatre Science Fiction Erotica Fiction
In Bookshelf
In Cart
In Wish List
Available formats
ePub
HTML
Mobi
PDF
Cover Art by Martine Jardin
Reviews
It was very good, at the beginning I did get a little lost, but boy did the end make up for it.
Trinity Blacio
Read more...

More From Four Ever More

The streets of the town were empty as she walked with her steady stride. The weight of the basket was heavy, but evening was still in early stages. She paused outside the door to the law offices and checked her chronometer. Two minutes to spare. Too bad.

She pushed at the door and it wouldn’t open. Ecan was leaning against the door, she could see him through the window.

He raised his eyebrows at her language, but kept his weight on the door. He kept her waiting for two minutes. At exactly the two minute mark, he lifted his weight from the door and opened it for her.

Ecan took her basket from her and handed it to Asher. “Shen, what is the charge for swearing at a lawman in pursuit of his duty?”

“Some form of confinement, I would imagine.” Shen had a serious face, but a distinctly amused glint to his eyes.

“Very funny, guys, I have to be getting back to the bar.”

“Well, you did say that we could take it out of your hide. You are a woman of your word, are you not?”

She tugged futilely at the cuffs. “I am, but restraints are not necessary.”

Shen smiled. “They will remind us to use it.”

He stood and came forward until his body warmed hers. He reached up, gripped the bars above her head and lowered his lips for a kiss. “Restraint.”

Kalli went up on her toes to meet him halfway and he ignored her parted lips in favour of a slow exploratory kiss that left her shaking. Her nipples were taut and she wanted to rub against him in the worst way, he carefully held himself away from her.

When he pulled back, she glared at him, “Tease.” 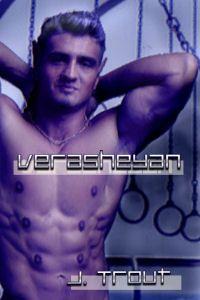 Dark Dream of You (MFMM)
Penny Lane
In Shelf
$5.50
Tweets by
sirenbookstrand