Not Too Old for Love 1

Divorced and emotionally damaged, artist Grace Stollery wants nothing more than to spend her semi-retirement painting and let time heal her emotional scars.

But when dashing widower Alfred Nobel moves into her retirement village, he turns her life upside down and her heart inside out by awakening feelings she wants to keep dormant.

Alfred quickly sets out to woo Grace and slowly she warms to him. But the village’s resident femme fatale wants him for herself. Will she succeed in driving a wedge between Alfred and Grace? 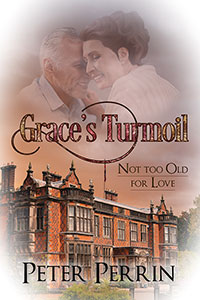 Not Too Old for Love 1

More From Not Too Old for Love

Grace jabbed at the volume button on the remote control, turning up the sound on the television. She was trying to drown out the chatter which filled the palatial residents’ lounge. It had been like that for days, and she’d grown tired of it. Who would have thought the imminent arrival of one man could affect mature ladies like that?

One of the things which had appealed to her when she moved to The Grange retirement village was the lack of men. Yet a man who aroused feelings in her she didn’t want was going to add to their number.

Grace had caught a glimpse of him across The Lounge a few months ago, taking the standard tour of the seventeenth century mansion that now housed The Grange. He'd towered over the young woman he’d been with, and she’d guessed he was at least six-foot-five. Built like a tank, with a mass of wavy white hair and a snow-white beard, he’d reminded her of a polar bear. His presence had been overpowering and almost menacing. An image of him defending the old mansion in days gone by had jumped into her mind.

Looking at him had sent a spontaneous burst of attraction rippling through her. It had caught her by surprise. Becoming attracted to anybody was the last thing she’d needed right then. Her divorce had been too recent and too painful. All she wanted was to focus on her painting to block out the pain. Although she hadn’t come there to look for a man, there was no denying how she’d reacted to the sight of him. She wondered how she would cope when they met. And she couldn’t help feeling he was going to have quite an impact on her life. Whether it would be a good impact or not was the million-dollar question. He might be the greatest thing since sliced bread! Or he could turn out to be a snake in the grass like her ex-husband.

It wasn’t only the divorce which caused her to temper her excitement at his arrival with caution. Being a Pisces, her emotions were her weak spot, and she'd tended to fantasise about her love life. Her relationships had always been traumatic until she had married, at the age of forty. Then, for the first time in her life, she experienced stability and calmness. She’d thought she had a good marriage. Then everything had fallen apart. She was in no rush to risk such heartache again—in no hurry to get involved once more.

Grace stared at her watch for the umpteenth time and fidgeted in her over-padded chair. She peeked around a heavy curtain and glanced out of the massive sash window yet again. But she couldn't see any sign of him. Frustrated, she tried to put him out of her mind and focus on watching Bargain Hunt. It was one of her favourite programmes, and she always tried to guess which of the teams would win. The persistent buzz of women’s voices filled her head. And she had to concentrate hard to follow the programme. But even then, she had to turn the volume up high to be able to hear it. In a fit of pique, she slammed the remote down onto the arm of her chair.

Grace became aware of movement out of the corner of one eye. When she turned around, she saw the General Manager, Sara Novak, and the man she’d been thinking about. The sight of him made her cheeks grow hot, and she turned away to look at the screen. As she did so, she realised Tim Wonnacott was about to announce the winning team. Then she felt something brush past her arm and the screen went blank. She spun around and saw Sara holding the remote.

“What did you do that for?” Grace snapped.

Sara blushed. “I'm sorry, Grace…and anybody else who was watching that programme. But we don’t often get so many residents in one place at the same time. So I wanted to take the opportunity to introduce our newest resident. This is Air Commodore Alfred Nobel.”

Alfred smiled and threw the residents a mock salute, by way of greeting.

“Alfred is a widower and a senior ex-Royal Air Force officer,” Sara continued. “I’m sure he’ll make a welcome addition to our small group of gentlemen residents. He’s an accomplished ballroom dancer—a talent some of our ladies will appreciate.”

Sara's announcement created quite a buzz among the ladies. “I’ll bring Alfred around to meet as many of you as possible before lunch,” she said in conclusion.

Grace rose to her feet and faced Sara and Alfred.