Kerri felt like Cinderella as her birthday arrived and a pair of special shoes sat waiting at her door, but she had no Prince Charming to speak of. Planning to thank her friend for the gift, she later found a Prince waiting in the wings. And not only did he want to slide the shoe onto her foot to see if it fit, but he planned to do so many other wonderful things for her feet, too. 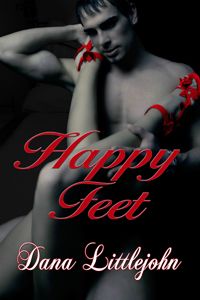 Keri stopped abruptly, stunned by Rueben's expression. His mouth had dropped open slightly and his eyes had glazed over.

His lush, dark eyelashes almost closed as she followed his line of sight even lower. She cocked her head to the side slowly, attempting to mimic him. The black band at the bottom of her dress had risen showing a good amount of her thighs, but that wasn't where his stare landed. He was ogling her foot.

Stunned anew, she looked back and forth between his eyes and her foot to confirm her suspicion, and sure enough, as her foot bobbed over her crossed leg his eyes bounced with it.

Kerri watched him curiously. Slowly she placed the glass on the table and moved her foot slowly to the left then to the right as his eyes followed. She smiled as the clues started falling into place. Gripping the sides of the chair, she bit her lip and uncrossed her legs then re-crossed them again, switching which foot bounced.

Rueben's stare stayed locked on her changing feet. His champagne hung in midair on its way to his mouth, never making it that far.

Wanting to test her theory a little more, Kerri slid one foot up her leg as far as it would go. His soft gasp was her reward. Satisfied, she broke his trance with a question.

"So, Reuben, is it you I have to thank for the shoes?"

Rueben blinked a few times and expelled a breath of air before finally bringing his drink to his mouth.

"You were right. They're beautiful. Thank you."

"You're welcome. They look even more beautiful on you."

Kerri shrugged her shoulders and lifted her leg as high as it would go pointing her toe toward him. "You think so?"

Reuben lowered the glass to the table with a soft thunk. "Yes," he said with a gasp.

"Yes," Kerri hissed. "I get the impression you like shoes a lot. Or is it the feet that you like, Rueben?" She lowered her foot to his knee.

She could see the instant change in his demeanor. He could no longer sit still and his breathing had picked up considerably. His arousal was almost palpable as his erection grew before her very eyes. Reuben's stare focused on the foot that rested on his knee as he slowly licked his lips.

"Is it anybody's feet, or just mine?"

"I like feet, but your feet are extremely beautiful."

She slid her foot up and down the inside of his leg as she questioned him. "How would you know that? How many times have you seen my feet?"

Visibly shuddering, he closed his eyes in obvious enjoyment of her actions. She could see his cock pressing against the front of his pants as he licked his lips and stuttered out his reply.

"I--I saw you and Bianca getting a pedicure the other day."

"Really?" Kerri's smile turned into a devilish grin. She removed her foot from his knee holding it in the air. "Sit on the floor, Rueben. Take off my shoe."

Rueben obeyed immediately pushing the chair back and dropping to his knees. He held her foot in his hands sniffing it deeply. With slow deliberation his fingers undid the strap secured to her ankle. A gasp escaped him as the strap slid free of his grasp. His lips brushed across the top of her foot with reverence as he slipped off the shoe. Gently placing the shoe on the floor under the table, he turned back and sucked a manicured toe into his mouth. Rueben moaned loudly as he moved from one toe to the next.

Kerri was shocked at her own arousal. Never had she thought that this type of fetish play would turn her on and make her as wet as she was getting.

Rueben's hands roamed up and down her leg as he lay butterfly kisses on each toe and the arch her foot. Resting the shoeless foot on his shoulder, he took her other foot in his hands and gave it the same treatment. Setting the shoe aside, this time he placed her heel in his lap pressing the arch against the bulge in his pants.

"I can't tell you how many days and nights I dreamed of having you like this, Kerri," he whispered, lifting her feet to rub on the sides of his face. "I wanted to say something to you so many times, but could never get up the nerve."

His words and hands increased her already aroused state. She could barely control her heavy breathing. No one had ever loved on her like this before. She licked her lips to wet her dry mouth.

"Unzip your pants, Reuben," she managed to get out