Two weeks at her uncle’s farm seems like a life sentence to a young woman who recently celebrated her eighteenth birthday. The two cute college guys her uncle has hired make it a little more appealing, however. When Marly begins to hear barking dogs and the sounds of loud birds coming from the dark and dreary woods at the edge of the farm, she has to investigate. Pushing her way through the thick foliage, in the clearing of the woods Marly discovers something she has never before seen. Through the peculiarly present mist and fog, Marly sees silhouettes of what appear to be two men, but they are not the two young men hired to work for her Uncle Charlie. Who are they and what are they doing? Thinking that the two college guys are playing a joke on her, Marly sneaks to the woods often, but the loud noises and the men are not always present. Do Uncle Charlie and Aunt Susan know about this? And were the two men kissing? No way! 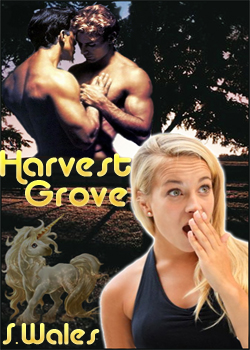 Curious to know what was up with the mysterious college guys, Marly set the rake down and followed the footsteps of Marc and Koby into the trees.

It seemed dark and dreary with the huge trees all around her and Marly almost turned around and went back when she heard what sounded like a dog barking. “Doggie, here doggie,” she whispered. She couldn’t keep herself from continuing toward the sound, but her curiosity had gotten her into trouble before and she had promised her mother that she would obey Charlie and Susan. But Marly couldn’t help it. “I have to know what that sound is.” She whispered, “Doggie, here doggie”, again, but then the sound stopped suddenly. All she could hear now was her own footsteps as they made a crunching sound on the dried leaves. She pushed aside the thick foliage to get a look at what was no doubt hiding somewhere in the trees.

It was too dark to see much of anything, but what Marly could see looked like the silhouette of a man or perhaps an animal. She could not be certain which it was. The shadow moved slowly just a few feet from where Marly was hiding. She put her hand to her mouth when she saw him. “He’s naked,” she nearly screamed. The shadow moved to just behind a tree. The man leaned over and Marly had a better view of his butt than she cared to have.

As they neared the woods, Marly stopped.

“Are we going in there?”

“Sure, Marly, it looks scarier than it is. There’s nothing in there.”

The three of them stood in the small clearance and looked up at the sunlight. “See, Marly, nothing in here.”

Marly looked around. There was no sign of what had transpired here last night.