Nigel has dreamed of owning his own bakery since he was a very young boy, and he is now, finally, living his dream. Another dream of Nigel’s, sharing his life with a man who he loves and cherishes and who loves and cherishes him, is still just a dream. Nigel is very outgoing in general, but quite shy when it comes to intimacy, and fears that his shyness has scared away more than one man in his life. Someday, he tells himself, I will meet the man of my dreams. Nigel’s business partner and sister, Pamela, tirelessly plays matchmaker for her brother, but is beginning to wonder if Nigel will ever know the love and happiness that she, too, wishes for her younger brother, that is, until a very special customer enters the bakery.

Nigel opened the door to his life’s dream with the flair that was only Nigel’s. “Come in,” he said warmly, as he greeted his very first customers. Nigel’s partner and sister, Pamela, took a picture of the first of many customers who would walk through the doors of hers and her brother’s wonderful new establishment that day. The young mother and her daughter smiled for the camera, and the little girl walked quickly to the counter which showcased the prettiest sweetie-pies that she had ever seen. “I love pies and cakes,” the sweet little voice declared, and Nigel was thrilled to accommodate the dear child. “We walk by here every day,” the young mother said. “And every day, my little girl has been counting the days until she would get her very first sweetie-pie. We didn’t know exactly what a sweetie-pie was, but the pictures in the brochures and on the front of the store made them look very tasty.” “Well, you can have whatever you want, my dear,” Nigel said to the happy little girl.

At the end of the first day in their new business, Pamela cleaned up, and Nigel took care of the necessary financials, another of his many responsibilities in his new business. “I knew I should have taken more interest in accounting the way you did,” Pamela teased, as she watched her brother. “I know you don’t mean that, Pamela,” Nigel said, as he looked over his glasses at his sister. “You’re right,” she said, her eyes dancing. “It was a great first day, though, Nigel,” she said. “Even I could see that. Any plans for the evening?” “Goodness, yes, Pam. I will be right here, preparing for tomorrow.” Pamela had a family of her own, but she worried about Nigel. “I wish you had someone, Nigel,” she said. “Don’t worry about me, Pam. I’m fine.”

Nigel watched his sister leave to spend the evening with her family, and then he began preparing for tomorrow. He thought about his sister’s words. Nigel wished he had someone, too, but it was difficult for him to meet new people. Pam knew that her brother was gay, but that didn’t make it any easier for Nigel to meet that special someone. Nigel was shy when it came to intimacy, although he was very outgoing in general. “Someday, maybe,” he told himself.

Drake leaned over and boldly kissed Nigel. Nigel was a little surprised, but he didn’t pull away. Drake put his arms around Nigel, and Nigel slowly put his arms around Drake. Nigel wanted Drake to never stop kissing him. Nigel hadn’t been kissed in a very long time. He held Drake, and kissed him with passion and desire. Drake’s hand slid down Nigel’s back and onto the side of his butt. Nigel held Drake closer. Drake squeezed the side of Nigel’s thigh before he forced himself to stop kissing Nigel. Drake kissed Nigel’s cheek, and then he looked at Nigel’s face. “I’m not scaring you away, am I?” Drake asked. Nigel could hear the heaviness of his own breathing. “No,” he said. Nigel had been so worried about chasing Drake away by his shyness that he had never considered that this man might be fearing the same with his boldness. “It’s been awhile,” Nigel admitted, and cleared his throat nervously. “I know what you mean,” Drake whispered.

The timer went off on Drake’s culinary masterpiece, and they both jumped. “Well, I guess we should eat.” Nigel followed Drake into the kitchen, but neither of them said much during dinner. They watched each other’s mouth and lips as the lucky bites of food disappeared into the warmth and the wetness that they each now desired of the other. “Delicious,” Nigel commented. Drake smiled. Nigel wasn’t sure if it was the wine or if it was his desire for Drake, but he wanted this man who he felt comfortable with. Drake offered more wine, and watched as Nigel lifted the glass to his lips.

The sweet red liquid entering Nigel’s mouth was too much for Drake to take. He gently took Nigel’s glass from him and set it down. He licked the wine that trickled down Nigel’s chin. He held Nigel’s mouth and formed his own lips to Nigel’s lips. Nigel leaned his head back, and Drake slowly unbuttoned Nigel’s shirt, leaving it closed until the very last button was undone. Then he slid his hand into the open shirt, placing his warm hand flat upon Nigel’s chest. Nigel gasped, or moaned, he was not certain which. “Nigel, will you come to my bed?” Nigel loved the politeness of this man. 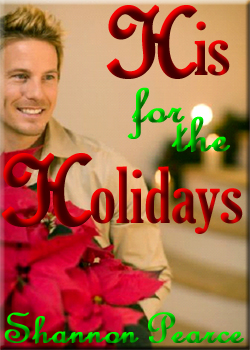 His for the Holidays
Shannon Pearce
In Shelf
$1.50