Healthy Addictions by Olivia London Her sister warned her about her friend Leonora, who prefers to be called Lee, but it’s too late because Meg has already fallen – hook, line and sinker – for the gal who puts sex as her number one thing to do. At the tender age of 26 Lee is a cougar before her time and Meg is more than willing to be her prey. Besides, some addictions are far too good to give up.

Sexual Communication by Landon Dixon Chester had been warned about making noise before by the shrew who managed the rundown rooming house. Only problem was, the place had paper-thin walls and cardboard floors, doors and ceilings. Hardly conducive to the loud, raunchy sex he and Agnes engaged in. And while the rest of the country was imbibing richly in the Jazz Age, for Chester, an aspiring newspaperman, the crummy rooming house off 32nd Street was all he could afford. Tone it down, or bunk next to the curb. Perhaps his next-door neighbour could help him out with his aural problems?

Excavations by K D Grace While volunteering on an archaeological dig, Gina and Mike discover new and exciting ways to help their workaholic professor relieve stress – and he introduces them to one or two methods of his own, which are far from academic.

7.13 by Sommer Marsden Elsie’s leaving town to start a new life. Taking the 7.13 train out of her small town. But before she goes, she wants to deal with a could-have-been, should-have-been, almost-was. Handsome, sexy, best friend Jason who should have been her lover ages ago – that single kiss has haunted her so – and will be now. Virgin or no virgin, Elsie plans to give Jason a proper goodbye, before she’s off to chase new dreams and leave old ones behind.

Friday Nights by Eva Hore When this librarian begins staying out late on Friday nights her inquisitive flatmate decides to follow her. Spying on her antics at a deserted warehouse, she gets more than she bargained for, especially when she calls for John, her boyfriend to come and witness for himself what she can’t believe she’s seeing. 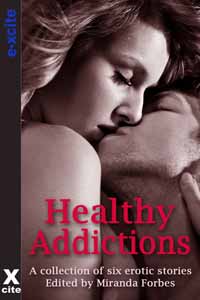 My train ticket was for 7.13 a.m. I rolled to the clock and read 4.47 in demonic red numbers.
Last night in town. Last night in this bed. Last night being the girl in the red house on School Road. I sat up, blew out a breath, got up and found my keys.
Faded jeans, brown boots, that shirt with the feathers embroidered on it. My middle of the night – or early morning, depending on how you looked at it – uniform screamed vulnerable, frantic ... needy.
He answered the door in a pair of grey sweats. That was all.
‘I leave tomorrow. Hours, actually.’ I traced the line of his threshold with the toe of my boot. I pushed myself into the doorway to feel the heat of him.
‘I know.’ Jason touched my lower lip and then his mouth touched the place his finger had. ‘You don’t have to go, you know.’
‘I do. But I don’t have to go without having had you,’ I said. ‘I can at least deal with that before I go.’
A new life waited for me. A new life away from small towns and small-town boys, who for various reasons had always wanted me but never done anything about it. So I would do something about it – before it was too late.
Jason didn’t speak, just tugged me in and kissed me hard, the electric jolt of contact a searing reminder of one lone kiss a million years ago. Maybe it was only seven years ago, but it sure as shit felt like a million. We’d had one kiss and never another since. But now, he pressed me up against the old white door with the number 11 tacked to the front. And this kiss crushed that kiss a million years ago.
‘Why did you never try?’ I blurted. I had to know. It might be stupid, misguided or just plain asinine – but I had to know before my life rolled on and away from him.
‘You were too big for me.’
‘Is that a fat joke?’
His body smashed flat to me, the heat overwhelming and welcome. His breath sweet on my face. Jason’s hands found my beautiful fragile top and raked it up over the ladder of my ribs to expose my belly. A multitude of goosebumps rose to the occasion.
‘No, Elsie, too big like too much – too precious. Too wanted. You were the girl to me. So much so that I was pole-axed. I kept you at arms’ length. And I blew it.’
He was the antithesis of what I was off to become. Busting my way out of our little town, off to be an artist. Off to work for a firm in the city. Me running away from the farm boys with dirty boots and faded jeans and sunburn on their noses from the first warm sunny day in the fields. Boys like Jason with his work-firmed forearms and big booming laugh and corn-fed prettiness.
‘That is the stupidest thing I’ve ever heard,’ I said. When he pressed his hands to my breasts, I pushed myself into the cups of his palms. Let my eyes fall shut and my heart speed up. I had wanted this since we were old enough to want. How in the fuck had it taken so long?
‘I know. What can I say, stupid.’
‘You’re a dumbass,’ I said, amiably.
‘I know.’
He peeled the top down and under it I was warm and bare and braless. His mouth, a hot reminder of all the masturbatory fantasies that had starred one Jason Prescott, blazed a wet trail over my skin. My nipples peaked and pebbled for him and I touched the front of his sweatpants – half afraid there would be no erection there for me, half terrified there would.
His cock was hard and seemed to jump at my touch. I squeezed him lightly and kissed him when his mouth found mine. ‘Be good to me,’ I said.
‘Be good–’ His eyes flew wide for just a moment.
I laughed. I couldn’t help it.
‘Elsie, you’re not ...’
‘As pure as the driven snow?’
Jason nodded, that look of his that always indicated his urge – thanks to his good-good heart – to hide or simply drop dead.
‘Jesus.’
‘Is my homeboy,’ I joked. ‘But yes. And no. I’m experienced in all things that are not actual fucking,’ I said. ‘The world’s biggest joke, right? In this day and age, a 20-year-old virgin.’
‘Jesus,’ he said again, but his gaze tracked my mouth as I talked. It made me shiver the way he looked at me.
As excited as I was in my gut to get out of this fucking town, I was heartbroken to be leaving that gaze – that face, that big-big heart. We had substituted friendship for love in our own personal equation. I would miss him on many levels.
‘If you keep calling him, he just might show up. And that might ruin the mood.’ I touched his face and he sucked my finger into the heat of his mouth.
‘Virgin,’ he said against my throat, working at my jeans with his fingers.
‘Only in the most traditional sense of the word.’
‘Virgin,’ he said again.
It was the only thing I could do to shut him up: I dropped to my knees. Those beleaguered sweatpants gave up the ghost pretty easy. How many times had I imagined pantsing him just to have something dirty happen? How many times had that been one of my waking dreams, spaced out at my stupid job, thinking dirty thoughts of pretty boys. And here I was at half-past five in the morning, bags in the car, on my knees in front of him.