Can she save his immortal soul... and help him find heaven on earth?

Touching Sephora may cost Kieran his soul… Kieran has always been a good Catholic, even studying for the priesthood. But there are complications. A few weeks before his ordination into the priesthood, he was made a vampire. And then there's Sephora, the beautiful, independent American student who draws him to her. His "blackbird", she seems to hold all the secrets to life and happiness, like the mythological creature of the ancient Celts. Despite his best intentions and though he knows he can only hurt her, her hold on him increases by the minute.

Although Ireland promised Sephora an escape from the horrors of a brutal attack she suffered two years previously, she has discovered that the true scars lie within. But being with Kieran melts away the pain and his touch provides her the refuge to reclaim her body.

WARNING: A gorgeous Irish hero and gutsy heroine. Biblical and religious themes that might offend. 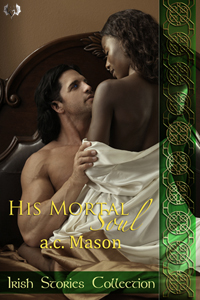 To be this near him caused her mind to whirl. The good kind of dizzy. She had sensed him since the morning two weeks ago on the bridge. She felt him--under her skin. Somehow, he’d gotten into her through and through without ever touching her. She’d let a man into her room, her safe space, for crying out loud! Even stranger still, she had wanted to since the morning on the bridge.

Her best friend Amanda had hoped for Sephora to be interested in a man once again. Sephora had been happy when the nightmares stopped. The damp cool temperature of Ireland had settled her restlessness, but the real scars were still inside.

Moonlight streaked on his face from between the curtains, giving his features a dangerous beauty. The angles of his jaw were sharp. His broad shoulders obstructed part of the window. Her best guess was that he was a foot and half taller than her, possibly more. All she was sure of, was he made her feel protected. And now she had him in her room. Good thing she’d cleaned the mess up in here before she’d headed out. Picking something to wear had been an ordeal. She’d gone through her entire wardrobe before settling on the teal shirt and tight black pants. Dressing in a way that flattered her body didn’t mean she was inviting sexual advances.

“I’ve never been intimate with a woman, Ms. Silverman.” He cleared his throat and as he crossed his arms over his chest, the muscles flexed.

She smiled. “My name is Sephora.”