When love competes, will anyone win?

Harry has just begun his career as an architect with a well-known Chicago firm, but when he runs up against the talented, successful, not to mention stunningly handsome Garrett Reed, he quickly loses both his cool and his first big contract to the other man. Now a second job has just come up for bid, a huge project that can make Harry’s career. And Garrett is after the same prize.

Garrett is fascinated with Harry. He admires the man’s drive and talent, not to mention his incredible good looks. But as the wild attraction between them burns hotter, the cool, aloof Garrett finds himself in an uncomfortable position. Can the two of them find a way to temper the passion that flares between them, or will their competitive natures tear their tentative love to pieces? 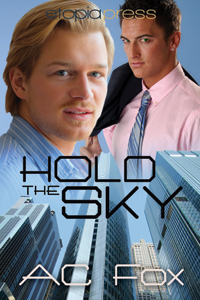 This was his first big job ever—well, his first time on the proposal team with his boss, Jill Styles, and everything seemed to ride on it, maybe even his future with SBC Architects. Or maybe he was just hyping this up too much, letting a case of preperformance jitters get out of control.

For a second, he closed his eyes on the crowded coffee shop, on the packed line he and Jill waited in, and focused on his breathing, focused on the rich, dark smell of coffee.

No good. The overcaffeinated butterflies in his stomach still fluttered around, making him feel vaguely queasy. This was an important proposal for an important job with an important client. He’d only been a licensed architect for less than a year, and he sure as hell hadn’t done anything like this while working as an intern. Things were a bit more intense here in Chicago. The sweat had already dampened his silk shirt. He wanted to take off the suit jacket and yank down his tie so he could breathe, but didn’t dare. The noise in the coffee shop pounded against him in waves, increasing in volume and hushing again, and made him wonder if he were going to be sick all over the tile floor. Or go crazy.

He was betting on crazy.

“You look terrible,” Jill said. “And your tie is crooked.”

He felt his face flush, and she laughed, but not in a cruel way. Jill was one of the three partners and head architects at SBC, the S of Styles, Brokor, and Carrigan, a firm of more than twenty people. She’d been the one to hire him after he’d finished his three-year internship in Milwaukee. He’d always harbored a secret bit of envy for well-put-together, head-on-straight people, and his boss fit the bill perfectly. She was in her late forties or early fifties, her hair swept back, and of course immaculate in a suit that accented her thin body and screamed success and professionalism. Meanwhile, Harry counted himself lucky if he could show up somewhere without terminal wrinkles in his trousers.

His boss had taken him under her wing from the get go, and he wasn’t sure how he felt about that either. He also didn’t know if she knew he was gay. He’d said nothing, of course, not wanting to upset the balances at work until he scoped things out a little more, and it was none of their damn business anyway—but he’d caught her looking at him with a steady, appraising gaze after he’d gently turned aside the attentions of one of the female landscape designers.

Damn—focus, man! Coffee and then hell, in that order. He straightened his tie, smiled at his boss, and tried to stop sweating. The line moved forward a little as baristas worked through the orders. The air still brimmed with the dark, full scent of roasted coffee beans—a smell he loved—and he tried to let the familiar scent soothe him. Keep calm. Stop sweating. This was just a short pit stop before the big game. No need to be nervous.

The man who strode into the coffee shop caught Harry’s eye immediately, and he felt his heart rev up even faster to racecar engine piston speed, thudding so hard and fast he could feel the throb in his temples.

Oh God it was true, what they wrote about love…well, lust definitely, and the pounding heart. Either that or he was going to have a heart attack right here in a coffee shop and they’d lose the client for sure. He almost dropped his laptop case and blueprint tubes because there didn’t seem to be any strength left in his fingers, but he managed to hold on. Barely.

The man was everything Harry wanted, as if a personal fantasy had been cut out of his mind, pasted straight into reality, and painted in three perfect dimensions. His little coffee-shop fantasy had been given eyes the green of rainforest leaves, and the man gazed around with clear intelligence, almost an intensity, taking everything in, processing it. He had a strong jaw, clean-shaven, with short, dark blond hair cut to look stylishly disheveled. He wore what had to be a designer suit, because nothing that wasn’t perfectly tailored could fit a man so well. Tall, with an athletic build. He scanned the long line stretching to the counter and frowned a bit. His gaze stopped on Harry. Those intense green eyes regarded him curiously. The man smiled.

Harry turned around at once, and again almost dropped all the stuff for the meeting Jill was making him lug around like a pack mule. His heart hammered away even faster, and he fought to suck in breath through a chest so constricted it felt as if he were being attacked by an anaconda. He was sweating freely now. If he’d been in the security line at the airport, they’d have already pulled him aside as a suspicious looking person, far too agitated to be innocent.

“I’m sorry.” He smiled at her and told the biggest, most unbelievable lie possible. “Didn’t know it showed.”

She only snorted in reply.

He glanced back just before it was their turn to be served at the counter. The man still watched him. Harry’s eyes widened. The man smiled again, not quite a pleasant smile either, but an all too knowing, all too confident smile. That smile said the man knew he looked good, and knew Harry thought he looked good, and that smile was damn proud of the fact.

God, what an arrogant jerk. Harry wheeled back around quickly and promised to ignore the guy from here on out.

They ordered their coffee. Well, Jill ordered some kind of frothy caramel Frappuccino thing that the office assistants couldn’t ever seem to ever get right, which was why they were here this morning, just an hour before the big proposal, so she could place her order in person. He ordered coffee, black. The barista arched an eyebrow at him as if he’d just crawled out of the primordial pool, ordering something so prehistorically passé. Well, screw that guy too.

He stood off to the side with Jill while they waited, listening with half an ear as Jill went over points for the meeting, oblivious to everything around her. It was a big job—a corporation called Halthor, Inc., was looking to build a training/retreat center for executives, and with pockets as deep as Halthor’s, the place would be more like a five star hotel than a classroom. The big money at stake meant Harry had been free to create an elaborate design, and he knew it was his best work to date. But was it good enough?

Their order came up. Jill patiently held both cups while he wedged the blueprint tube under one arm and juggled the laptop and finally took his coffee. She was looking out the door and still talking about stress and displacement constraints. He tried to listen, but when she shifted over to material design variables his mind careened off the tracks, refusing to concentrate on anything but the seething hot man standing in line, slowly getting closer to him. Which meant he was thinking with his dick again, not the main CPU, and this was perhaps the second worst time in the world to be doing so. The second worst, because the absolute worst would be during their formal proposal in front of the client.

As they started for the door, he glanced at the man again. He couldn’t help it. The man had moved farther up the line—just one back from being served. He caught Harry’s glance and nodded. This time, Harry nodded back, and lifted his coffee cup in some kind of cheesy coffee-cup salute that made him feel like an ass a split second after he did it. Even so, he tried to etch the man’s face and the sight of his athletic body into his mind for later. He even managed not to blush when he thought about how he’d next be picturing the guy, naked, glistening with sweat, rock-hard cock ready for action and locked forever in Harry’s personal erotic fantasy world.

He felt his dick stiffening in his pants and tried to shove the thoughts away. Damn, it was hard being between lovers sometimes. He followed Jill out to her Audi, back to counting down the seconds until the big moment like a man counting the steps to the gallows.