Ghostdom’s archenemy, evil scientist Jason Jones, has broken out of prison—with a little help from wicked dictator Yoon Lee Dongpang. Yoon Lee wants to rule the world, and he plans to use Jason’s ideas for harnessing live brains, installing them in his new super computer.

When the going gets rough, who can the Ghastly Committee call? It’s Sara, the kitten ghost to the rescue. Dead but not down. However, there’s a catch. She’s been saddled with a human partner named Joel. The living and their little rules! Well, she’ll see if she can teach him a thing or two.

Sarah and Joel will have to fight Úmbra ghosts, spies, and the whole Honywuan military in their hunt for the mad scientist. Will they find him before he can put his new living computer to use? Will their partnership survive the experience? Will they?

More From The Coventry Ghosts 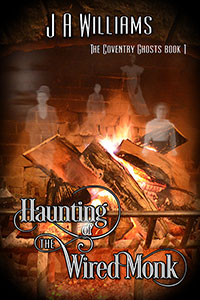 Haunting of the Wired Monk
J.A. Williams
In Shelf
$4.99

The snarling, snapping dog shot after Sara the instant it was loose. She bolted, like a streak of lightning, across the road. She was more terrified of the dog nipping at her black kitten heels than the cars that roared down the street. Tires screamed in protest. Sara looked up as a huge automobile bore down on her at a fantastic rate of speed. The safety of the sidewalk was one short leap away. She could make it, she knew. Terrified, she jumped.

The sidewalk loomed…closer, closer. Whiskers away, she could touch it with her forepaws. But the instant before she landed, a burst of pain unlike anything she’d felt in her short life tore through her, from the tip of her nose to the end of her tail. After a few moments, the agony faded as the world grew dim.

She heard a voice…a gentle, cooing voice. The sound grew closer until it whispered in her ear.

“Please, sweetie…please live. I’ll love you and take care of you. Please live.”

It was the voice of an angel. She would live for her. Then her heart stopped.

Sara looked around. A soft, warm, welcoming light called to her—pulled her. That wasn’t the direction the kind voice had come from. This she knew by kitten instinct. She searched for it, and then a door appeared, and she could hear the kind voice on the other side.

There was no sky or walls, no floor or ceiling—nothing existed except for the light and the self-illuminated door. She could only push open doors if they weren’t latched, but she’d make this one open for her. Of that she was certain.

She zipped over to it just below the knob, though she didn’t notice how she moved. She went to push against it and butt her head. Ouch! She hissed at the door and swatted it. Then she charged it, sharp kitten claws extended. Nothing would keep her out! She shot right through it and found herself looking over her body, which lay on a round table outside a building.

Too weird. Sara shook herself. I’m dead, she realized after a nanosecond.

Through the glass doors, the interior of the building resembled a cozy living room, but the windows were all wrong. She spun in midair and saw two ladies standing near her body. They hugged one another.

One said, “I’ll take care of it for you, Tammy. There was nothing any of us could’ve done.”

“Hi Tammy,” she said. But the woman didn’t respond or show any sign she’d heard. Sara was certain she wouldn’t ignore her, so why couldn’t she hear her? Then she became distracted.

She spun in midair where she floated, twitching translucent ears, searching for the source of the sound.

“Don’t be afraid. Come to me, gnarly kitty!”

The voice came from inside the building, she realized. She wondered how she might get over to the window, but the thought itself popped her over to it. Looking down, she saw she had no back paws, though the realization didn’t bother her in the least, which struck her as a strange thought.

When she looked back up, she noticed her left forepaw was partway through the window. She remembered she’d never been able to get through a locked door before she’d broken through the door to—this place—and wondered if the rules were different here. Maybe the window wasn’t a barrier here—wherever here was. She whooshed right through it with a thought, and through another spirit on the other side. Soft, warm, yellow sparks shot out from the contact, and the other ghost giggled.

The other apparition stared out the window at the two women near her dead body.

“I wish I knew the pretty brunette’s name. I must be able to see her clearly, because I was calling you while you were between death and entering Ghostdom.

“Well, I know the answer to that. Her name’s Tammy,” Sara said in a smug tone.

“Of course I can. Though dead humans must be smarter than living ones, ‘cause you can understand me.”

“You’re a very clever kitten. My name’s Leanne, I’m the Coventry Ghost, and this is my haunt.”

“It’s nice having the company of such a smart kitten.”

“I want to be with Tammy. She called me, but I couldn’t live, so I became a ghost, though I didn’t understand that at first.”

“I think you should stay with me. Tammy must be kind, but it wouldn’t work having her as your best friend, ‘cause it’s against the law. You need a ghost friend. I have a haunt and I know the rules. I’d be happy to share it with you. We’ll be best friends, I just know it.”

Leanne went on and on about the rules. It wasn’t very interesting, and after Sara lied to Leanne and said she’d follow the rules, her mind wandered. She liked her new friend, though, and now had a whole new world to explore. She wondered if there were any dogs here. She arched her back and fluffed phantom fur at the thought.

The coffee shop, though, felt like a forever home.

“Whatever is it about that coffee shop anyway?” Jane Seymour, who was once queen of England, grumbled to her friend, His Honor, Judge Jeffreys, who presided over Ghastly Courtroom #3.