Isola Dei Sogni. Where dreams and fantasies come true—if you let them.

Mia might just strangle her sister. Her fantasy is a good book and a bottle of wine, and she doesn’t have to traipse halfway around the world for that. Until she meets Dylan. This much younger man sends her libido into overdrive and makes her want to fulfill all of his dreams.

Dylan is on the island under protest, until his tiger spots Mia. Suddenly this trip isn’t a chore but pure pleasure. With his mate’s scent in his nostrils nothing is going to stop him from claiming what’s his.

Certainly not the minor detail of Mia having no idea of what really happens on this island, or the fact that shifters exist. When reality creeps into their idyll, will Mia be the strong mate his tiger needs, or will this fantasy end all too soon? 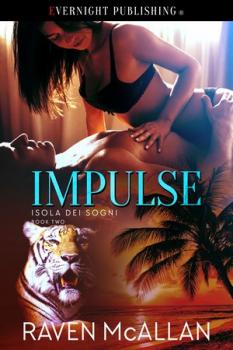 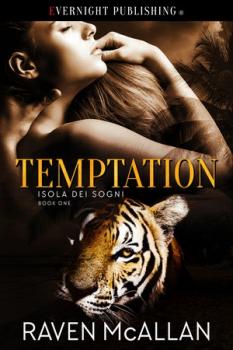 Mia stared up at him. His trousers stretched over his thighs and across his stomach. She glanced at his cock and away again in a hurry. The bloody man had a hard-on. Just by looking at her under the water? It couldn’t be the reason. She was surely all blurry and wavy? Mia had a quick glance down to reassure herself. She wasn’t going to admit it, but she was wet from more than the pool water and her skin tingled with arousal. Even her scalp itched in a good way.

There she was with the most interesting male she’d met in a long time in close proximity—even if he was too young—and she had to stay submerged. Her wet hair flapped around her face, because as typical, she forgot to pin it up. She’d dispensed with a swimmy, so was bare-ass naked, and all of what she thought of as her unimpressive bits were off on show. Mia decided there and then she could never be a femme fatale. Too self-conscious and too aware of outside influences.

However, to use a favorite phrase of her mum’s, boy, was he hot to trot. Hmm. What to do next? Mia cleared her suddenly dry throat.

“Why did you say you were here?”

He grinned. Pure. Devilish. Wickedness. The sort of smile to make even the most hard-nosed woman weak.

“I didn’t,” he said, “say why. Do you want me to say something deep and meaningful, or do you want the truth?”

“Okay, so I did bring champagne.” He waved in the direction of an insulated box. “And unbreakable glasses. But … I cannot tell a lie. I was hoping for a sneak peek at your gorgeous body in the buff. A bit poetic, but truthful. I wanted to see you naked. Still do. Oh, and I’m here to cater for your every desire.”

Mia considered what he said. What the hell? She was on holiday, alone, and while not young, free and single, two out of three would do. She made up her mind. Meryl wasn’t around and had told Mia in no uncertain terms before they left home, that she, Mia, was on her own all week. Meryl had her own agenda. Mia spoke rapidly before she could change her mind.

“Are you married or otherwise spoken for?”

He shook his head. Mia noticed that now his hair was looped back with a string of leather. Very nice.

“Nope,’ he said in a firm, no bullshit tone. “Single now, divorced for twelve years with no significant—or otherwise other—male or female, unless you count the cat. Clean bill of health, only here for a week as a favor to the management. Oh, and definitely financially solvent. So?”

She took a deep breath. She’d go for it. No one would know. He wasn’t likely to fuck and tell, not here. Especially as he said he was doing the management a favor. To screw with and screw up a customer wouldn’t be a good move.

“So? Would you like to join me in here?”

His grin, nod, and a certain part of his body—judging by the hard ridge she could discern under the tight denim jeans—were one hundred percent hot, aroused male.

“Hold on.” Mia started to panic as he began to unbutton his shirt. “What about dinner? And what are you going to wear?”

“For dinner? Up to you. For now? Nothing. Oh, and while I remember. About dinner? On hold ’til you ask for it.” His hand went to the next button and he lifted his brow in silent query. In the subtle light, Mia only just noticed but nodded anyway. His shirt was unfastened and he threw it onto the lounger to rest on top of her bikini bottoms. Well, now she knew how he’d had confirmation of her nudity. Her bikini top was still fluttering away like a flag at a rally.

“Okay.” She did her best to ignore the rumba in her tummy and the butterflies dancing on her clit. Mia couldn’t take her eyes off him as his hands moved lower.

Oh, God, now his jeans. I wonder if he’s going commando? And then what?

For fuck’s sake, she had to zip it.The think-it-and-spew-it scenario was so embarrassing. Unable to look away, but feeling a terrible voyeur, Mia watched as he slowly peeled his jeans down his legs. Her suspicions—or was it hopes?—were right.

Dylan smiled. “Thank you,” he said gravely. “Do you want me to stand here a bit longer or shall I get in the pool?”

“What? Oh, hell, I’ve done it again, haven’t I?” She could have sworn she hadn’t spoken aloud.

“Just get in.” She laughed, a rich, deep, sexy laugh that surprised herself as much as it seemed to him. His eyes widened and he chuckled. “But do it slowly,” she added. She might as well enjoy the show.

Dylan let himself slide into the water slowly, as requested. He winked and appeared as if he was enjoying himself as much as she was.

Mia held her breath as he swam across to stand in front of her. He didn’t touch, he just looked, and she thought—hoped—admired.

“You,” he said slowly as he stroked her cheek, “are my fantasy come to life. I want to caress you, explore you. All over. And over and over again. To feel those wonderful breasts pressed against my chest. To discover the taste of them, the feel of them in my mouth. To have your legs wrapped around me, to feel your body rubbing against mine, to make me even harder than I am now. To push myself into you, to feel myself filling you and exploding in you. To hear you cry as you climax around me. And then to make you feel all those things again and again, with my hands, my mouth, my body—and, oh shit, give me a minute here.”

She rather thought he struggled for composure.

“Thank God for the calming effects of water.” Dylan’s voice was strangled, as if he had trouble forming his words.

Mia let out her breath. Noisily. “I’ll second that.” For someone who didn’t work there, he sure knew how to turn her on. Thank goodness she didn’t say that aloud.

“Nothing, just give me a minute. Then we’ll talk.”

Mia nodded. Why didn’t the water have its usual shriveling effect on his cock? He leaned against the side of the pool and swished his legs, creating ripples and waves that concealed the lower half of his body, but his arousal was nipple-hardening, clit-clenching, and juice-collecting evident. Mia swam toward him and trod water.

“I’ve decided,” she said. “I have my fantasy now. Do you think you’ll be able to remember it for me? It’s totally out of character for me, but very simple.”