Martin Calder and his girlfriend Dana—no last name given—are back. Their powers are now known to the general public, and their wish is to help out those who need it.

However, those in the law enforcement world aren’t so accepting. Reduced to starring in their own reality show—and messing it up—other, more urgent matters take precedence. The weather has changed, and the sun has started to turn blue. Although it’s a physical impossibility, it has happened. The Earth will freeze in a matter of weeks if nothing is done, and only Martin and Dana can help.

Their journey takes them back to Ardana, Dana’s home world, in search for answers, and subsequent searches send them on a quest across the galaxy where they meet vampires, energy-sapping rays, cat-mole people, and a boy-not-a-boy who may be the answer to everyone’s prayers.

Sometimes, giving everything isn’t enough. Sometimes, you have to give more than that—even your life. 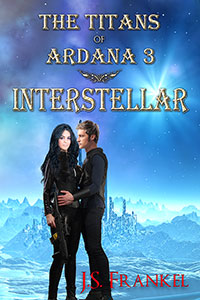 More From Titans of Ardana 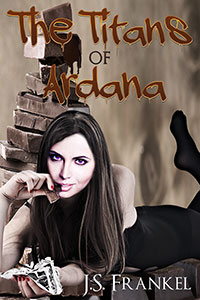 Shrieks of fear split the air, and as I looked through the window, pedestrians were running for their lives. It wasn’t a sale, and the people fleeing sounded far from happy, so it had to be something else. Earthquake, fire, something the police couldn’t handle?

No, it had to be the only thing. The roar of something inhuman rose above their shrieks and interrupted my dinner, and why couldn’t this wait until after I’d finished eating?

With a sigh, I tossed my napkin down. Crisis time, and where were the police? They were doing their best to keep everyone away from the action. Naturally, a few dumbass bystanders just had to hang around, doing the snappy-snappy thing, recording the incident for posterity. Didn’t they realize they were in danger? Or perhaps they didn’t think anything would happen to them?

Whatever, there they were, lined up outside the restaurant window, smartphones ready. They were getting it all down to post on some social site later on, garner their fifteen minutes of manufactured fame that no one cared about. In the meantime, my girlfriend Dana, who was sitting across from me, would probably have to put our butts on the line—again.

Dana, a resident of the planet Ardana, had been my girlfriend for the past eight months. As an all-around ass-kicker extraordinaire with me acting as back-up, she and I had been sitting in this nice, comfortable restaurant, kicking back and looking forward to enjoying some private time together.

I looked down at my bodysuit. Black and tight-fitting, it seemed out of place among the other patrons who were casually dressed in jeans, shorts, t-shirts and so on. They’d given us a few furtive glances when we’d walked in, but then had gone back to their meals and their lives. Dana wore the same kind of attire I did, but on her, everything looked great. Call me biased, that’s how I felt.

As for our plans, we’d just returned from a far-flung world, wanted to wind down and relax before going to our suburban home and—

A man in his twenties wearing a t-shirt, jeans, a wild afro and a look of total terror poked his head in the doorway to announce the obvious.

Yeah, tell me something I don’t know.

However, Dana beat me to it. “Be specific,” she answered nonchalantly while eating from a two-foot pile of donuts. Ardanians subsisted on sugar, so donuts were the perfect fix for her.

My sixteen-ounce New York sirloin sat on the table, three minuscule inches away, and the smell practically made me drool. A thing of beauty, it was rare, had garlic, onions, and a massive wedge of butter on top—and it called to me.

But that would have to wait. Reluctantly, I disengaged myself from my seat and ran outside with Dana, the man in the lead. He pointed in the general direction of the disturbance.

“What do they look like?” Dana’s question came out as though she’d been expecting things to go bad.

“Um, there are three of them, they’re big, like eight by five, brown, sort of cockroach-like with feelers, and they’re eating through the buildings,” he replied, shaking in his shoes. Fear-sweat ran down his face as he gibbered out, “They also stink! You guys have to do something!”

“We will,” I said, thinking about how to handle this. “Hang back, don’t get involved, and don’t take any pictures. Got it?”

Good enough for me. Dana took off, flying ten feet above the ground. As an alien, a titan, she’d been born with powers of flight, incredible strength, virtual invulnerability, and a willingness to mix it up with the baddest of the bad.

She also looked the part. Five-nine, with a head of long black hair, purple eyes that leaped out and seemed to swallow you up, a body most starlets would have killed for, and a total fearlessness in combat—she made one hot package.

On the other hand, while the same height, I carried maybe one hundred sixty pounds on a lean, rangy frame, along with a face best described as average. A pair of blue eyes, a long nose, and a mop of brown hair completed the picture. No cover model shoots for me.

Even though I didn’t look the part of a hero, I did possess the same qualities as Dana, courtesy of her twin brother, Van. He’d died tragically at the hands of an assassin, but before dying, he’d somehow transferred his powers to me. Call it magic or science, call it whatever you wanted, I had the ability to do the stuff of legends.

“Martin,” she said, cutting into my thoughts and bringing me back to reality. “Get ready. It’s time for combat.”

A rancid smell of garbage at high noon in the desert alerted me of the enemy’s position. The stink got stronger as we neared the source, and…sheesh! Roadkill would have smelled more pleasant.

I was sure our interplanetary visitors didn’t care, though. They were too busy chomping through brick and steel and turned dull black eyes on the humans standing by. Most of the men in blue were in the process of keeping everyone back, while a couple of them fired upon our non-native visitors. The bullets simply bounced off their hides.

As we neared the targets, I called out, “We’re on it. Hang in there!”

“We don’t need your help, Calder,” the lead cop yelled back, still blasting away ineffectively with his pistol. “We need the SWAT team.”

“SWAT team,” Dana muttered. “I could have told them their weapons wouldn’t work, but no, they just have to say we can’t handle things. The police are never on our side.”