The Witch and the Vampire 2

After being transported to the present time by a witch with the power to time travel, vampire Jarharis Southerland goes in search of blood to revive his body and encounters beautiful Selena Bentley. His lust is immediately aroused but then he sees the silver dagger

Selena carries in her boot and learns she's a member of the local vampire hunters club. Unable to resist her beauty, he pursues her--only to find he is trespassing in another vampire's territory. Aston is a ruthless, vicious killer with a legion of hundreds at his command--he issues a warning to Jarharis.

Jarharis is strong and commanding and not used to taking orders from anyone. He wants Selena and pursues her--setting off a string of murders and putting the vampire hunters in danger. Forced to go after Aston in order to save Selena, he unlocks the magic of an amulet he took from a witch's neck ten thousand years ago.

The Witch and the Vampire 2

More From The Witch and the Vampire

Selena moaned and rolled her head on the pillow. Jarharis looked down at her from his leaning position beside her on the bed. Perhaps he had commanded her sleep to be too lengthy. He sighed. He had spent hours watching her slumber, admiring her beauty, wishing she belonged to him.

He dashed the last thought that appeared in his mind. He was not mortal. He could not hope for such a woman as Selena for his own. He had no right. A wave of anger filtered through his insides. Damn the curse of vampirism.

"Where--" She suddenly bolted upright in bed, her eyes wide as she caught sight of Jarharis. "What are you doing here?" She scrambled to clutch the sheet against her naked breasts.

Jarharis watched her, a smile across his lips. He had wanted to wake her, but he feared her reaction to what he had done while she was under his command.

"Where are my clothes?" She jerked her head from side-to-side, finally spying her dress and undergarments on a nearby chair. She turned back to glare at him. "As I recall the evening, I was about to lure Aston into a trap--and you ruined my plan."

Jarharis nodded his head. "I didn't like your plan."

"I don't remember telling you."

"I suppose you don't remember taking your clothes off either."

He shrugged his shoulders. "Well, as you can clearly see, you're naked."

She clutched the wad of sheet between her breasts and glared at him. "What time is it? What did you do to me while I was unconscious? And when are you leaving?" She drew in a quick breath. "And who are you? What's your name?"

"One thing at a time. First of all, it's about midnight. And as for my leaving--"

"What did you do to me while I was unconscious?"

"You weren't really unconscious--more like a little bit incapacitated."

"What does that mean?"

He shrugged his shoulders. "My name is Jarharis Sutherland."

She narrowed her eyes on him, leaning closer. "What kind of powers do you have, Jarharis?" Her eyes suddenly widened. "Can you kill someone with a thought?"

"But you're a vampire. I know you are. I've read up on vampires and I know for a fact that you are one."

She sounded adamant. He was amused at her display of knowledge. "And what facts about vampires are you aware of?" His voice took on a teasing note as he smiled into her face.

"Don't patronize me, Jarharis. I'm quite serious about what I do."

"Honey, you aren't very good at it. Why don't you find something else to occupy your time?"

She bristled and flung an open hand in his direction.

He caught her wrist and brought her hand down to his crotch. "Your hand will be better appreciated here then against my cheek." 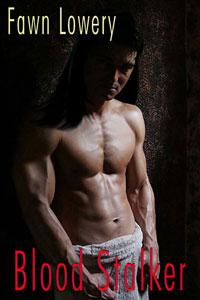