High Priest S’Rak is cursed with the ability to foretell the future. Sometimes. The problem with prophecy is that the Gods get involved and if any God is working to complete one, there’s always another God working to prevent it. S’Rak knows that something bad is coming. He knows that he can leave and avoid a great deal of pain and suffering and woe.

Captain Jisten doesn’t have mystical abilities to rely on, so he relies on his own senses and on logic. A murder in the city of a person he holds dear drives a deeper wedge between the already strained relations he has with the high priest. The events of the summer continue to haunt him even as S’Rak is named a murder suspect. 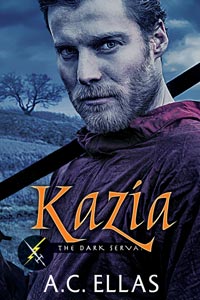 Rak led Trosp into his bedroom and threw the privacy bolt. He turned and faced the not-guard. “Why are you here, my Lord Traespo?”

“Are you not one of my servants?” Trosp replied, retaining his mortal disguise.
“The wing fungus was cured.”

Trosp threw his head back and laughed. “You think that is why I came to you? Oh, S’Rak, Thezi high priest, you are so amusing.” Trosp sobered quickly; he reached out and stroked Rak’s cheek with his hand. The touch felt good, and Rak could feel his fires urging him. Traespo had been lover to him on more than one occasion in the recent past. Was the god hoping to continue in that role as well?

“You are a prophet and a seer,” Trosp said quietly. “You know what is coming; you know what events have been kicked into motion with the recent conjunction.”

“Yes, I know. I saw the stars and planets in alignment with the ancient star map. The hunter and the trickster are both in the dragon still.”

“I will not run from destiny,” Rak replied. “I have a duty to defend the Victory Prophecy.”

“That, my dear high priest, is why I am still here.” Traespo, for it was the god now rather than the man he pretended to be, embraced him. “I am required to offer you another chance to leave and escape this madness.”

Rak rested his forehead on Traespo’s shoulder. “If I go?”

“Peace, for now. You would return home to lead your sect and raise your family. The war would continue, endlessly. If things go very badly, the army of night could be defeated, but these are all things you know already.”

“Pain and suffering, but the Victory Prophecy will be preserved and there will be a real opportunity to defeat the Unmaker.”

“And that, my dear Lord of Madness, is why I must stay.”