MAXIM JAKUBOWSKI'S CLASSIC NOVEL ABOUT BLOW JOBS AND LONELINESS. A BESTSELLER IN ITALY. Two parallel lives: He is a man who loves women too much, but still seeks to fill the puzzling emptiness that eats away at his insides. She grows up in an Eastern European backwater, in a culture where sex is a commodity and surviving is the name of the game. They travel down separate roads, both hunting for thrills and emotions. Coincidence brings them together. The encounter between their respective brands of loneliness is passionate, heartbreaking, tender and also desolate. Sparks fly are lives are changed forever, until a final, shocking epiphany. 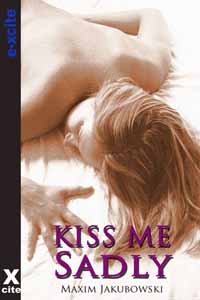 So, imagine my surprise when, towards the end of a routine e-mail one day in late spring, Milduta wrote me that she had just shaved her pussy.
Three weeks earlier we had been in New York, staying together at a small hotel on the borders of Greenwich Village. We had spent almost a week there, her first ever visit to Manhattan, and between feverish bouts of fucking, had walked miles, browsing shops, me gleefully buying her clothes and silk thongs from Victoria’s Secret, eating too much Japanese food, seeing movies, visiting museums, hunting down bars where they served fresh carrot juice which she could down by the gallon, discovering to our mutual surprise how well we fitted together sexually and emotionally. During our sex games I had often trimmed her, taking voyeuristic pleasure in thinning her pubes so that her meaty gash was openly revealed in its full glory behind the protective curtain of her curls. I had, almost jokingly, suggested not for the first time she shave her genital area. She had declined with a knowing smile, yet again pretexting the discomfort of the hair growing back afterwards and how her skin often reacted with undue irritation and unseemly pimples.
She’d had experience of this when she had briefly lived with a Swiss banker in Zurich. A dominant personality, he had required her to be shaven below. She had, initially, obligingly played along with his desires, still at a stage when she was testing the nascent relationship, unsure whether it held the prospect of becoming a permanent one.
With a laugh, she had also revealed that the banker shaved around his cock and balls, so that their smoothness had matched. An image that often fanned my erotic imagination.
My first reaction when I read her mail was to guess she had met another man.
Surely, when a woman reveals her intimacy so openly, it is for a man. Why him and not me? But she assured me she had only done it on a whim. Waxing her bikini line in the bathroom one morning, she had miscalculated and depilated unevenly. Getting rid of the rest was just a way of putting things right, she said. And it felt so sexy, she added. Not like in Switzerland where it was part of sexual compact. Now it was just for herself and no one else. She felt so naked below when riding her bike to the nearby town where she did her food shopping, and arousal came so easy in the knowledge of the secret she harboured down there. She sounded both amused and amazed that it should be so. I could have told her that long before, my fascination for smooth pudenda having steadily progressed from airbrushed models on pornographic playing cards to hardcore movies and evocative nude photography.